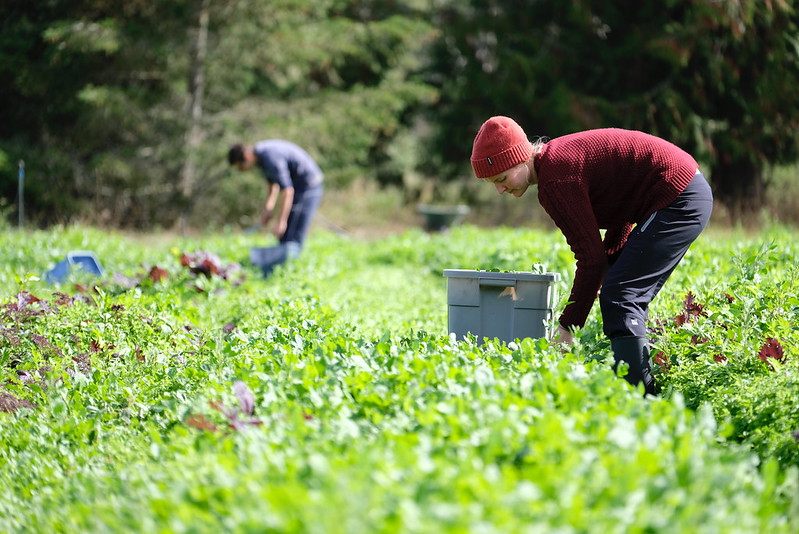 If you’re a gardener like me, you may be taking advantage of extra time at home to tend to plants that, by some slow-motion miracle, are generously unfolding themselves into food. These days, gardeners are increasingly in good company; interest in growing and buying food locally has surged in the time of COVID-19. Whether you’re starting your first cabbage seeds or just trying to find a bag of flour at the grocery store, many people are now thinking more deeply about where their food comes from.

Food security advocates are already emphasizing that “COVID-19 has drawn attention to the precariousness and interdependence of our food system,” urging us to see the economic and policy response as “an opening to invest in real food system transformation to ensure that everyone in Canada is able to feed themselves in a healthy and dignified way.” The Green Budget Coalition (of which West Coast Environmental Law is a member) recently wrote a letter to the Prime Minister identifying “environmentally sustainable agriculture” as one of several areas where the federal government could direct stimulus funds “designed with climate, ecosystem, social and economic resilience in mind.”

The way we eat is tangled up in all sorts of interconnected and global problems including systemic inequities, widespread food insecurity for households in British Columbia and across the globe, and prodigious waste (28 percent of the world’s agricultural area is used to produce food that is never eaten). Our food systems also result in environmental degradation, such as staggering soil loss, deforestation, water contamination and climate impacts.

While this can seem overwhelming, at least one key solution is located in our own neighbourhoods, namely strengthening local, small-scale sustainable food systems. This is summarized well by the UN Food and Agriculture Organization:

The food and agriculture sector lies at the heart of the development process and is both a main cause of, and solution to, the world’s environmental (e.g. climate) and social (e.g. unsatisfied basic needs) problems. Coping with the spreading global crisis requires focusing on small-scale food producers as a driving force towards socially fair and ecologically sustainable agriculture systems. Over the millennia, small-scale producers have evolved to more resilient and climate-adapted forms of agriculture which are essential to biodiversity and natural resources conservation, as well as to meeting the poverty and hunger challenge.

Supporting sustainable local food in the economic response to COVID-19

In the wake of the pandemic, the UN is urging countries “to seize the opportunity to ‘build back better’ by creating more sustainable, resilient and inclusive societies.” As part of this process, support for local food systems can offer overlapping benefits – including jobs with good regional distribution, increased community resiliency, improved food security and reduced environmental impacts.

Food Secure Canada argues that stimulus in response to COVID-19 “is an opportunity to strengthen our food system overall, revitalize rural economies, improve the health of Canadians, and build resilience - to climate change and other system shocks - now and into the future.”

The BC government has earmarked $1.5 billion for stimulating economic recovery in the face of COVID-19, while the federal government continues to draw up longer-term plans for economic recovery that are expected to focus on building “a stronger and more resilient economy by investing in a cleaner and healthier future for everyone.”

Economic analysts argue that designing stimulus in response to COVID-19 will require federal and provincial governments to “act short term, think long term” with a view to the future world we want to live in. Assuming we want this future world to include resilient, food-secure communities, how can stimulus for COVID-19 economic recovery help get us there?

Economic recovery measures at the federal and provincial level are developing with unprecedented speed. In order for sustainable local food not to be left behind in that planning, it will be important to turn to existing programs and policies to inform or distribute investments that fast-track stronger local food systems as our communities rebuild from the pandemic. What frameworks do Canada and British Columbia already have in place that could guide funding in the near term to strengthen our local food systems over the long term?

The following sections present just a few examples of tools the federal and BC governments have in place that could help with planning and distribution of stimulus and other supports for local food systems in the wake of COVID-19.

In 2019, Canada released its first national food policy, which the federal government describes as “a roadmap for a healthier and more sustainable food system in Canada.” Canada’s food policy identifies six priorities:

To support these priorities, Canada has established a Local Food Infrastructure Fund with two funding streams: one to help community-based organizations improve infrastructure and equipment “that is directly related to the accessibility of healthy, nutritious, and ideally, local foods within their community”; and a soon-to-be-launched second stream to support projects that “have the mission to reduce food insecurity in a sustainable manner by strengthening or establishing a local food system.” Moving forward on Canada’s food policy is identified as a priority in the new mandate letter for the Minister of Agriculture and Agri-Food.

The federal government recently launched emergency aid for farmers and food processors in response to COVID-19, describing the measures as an “initial investment” and stating that more will need to be done. The federal government also announced support of $100 million for food banks and local food organizations – some of which will be distributed through the Local Food Infrastructure Fund – to “improve access to food for Canadians facing social, economic, and health impacts of the COVID-19 pandemic.” Food Secure Canada applauded the announcement, while adding that it “hopes that these funds will support work that builds longer-term food system resilience. This is a momentous opportunity to build stronger food systems across the country, strengthening local economies and environmental sustainability, supporting local farmers, and building the health and wellbeing of all Canadians.”

Provincial frameworks for supporting local food in BC

At the provincial level, British Columbia does not have a single overarching, cross-sectoral local food policy. Nor has BC taken the legislative approach of other jurisdictions such as Ontario, which passed the Local Food Act, 2013 to require the provincial government to establish local food targets and annually report on progress towards those targets.

Interestingly, while she was in opposition, BC’s current Minister of Agriculture Lana Popham introduced a private member’s bill called the British Columbia Local Food Act, 2015 which, among other things, would have required the establishment of provincial local food targets and reporting along the lines of the Ontario model. As is the case with most private member’s bills, it never passed into law, and such an approach was not subsequently included in Minister Popham’s ministerial mandate letter.

Regardless, Minister Popham’s mandate letter clearly places emphasis on local food throughout its priorities (including revitalization of the Agricultural Land Reserve). Both within the Ministry of Agriculture and elsewhere, BC has developed a number of important frameworks that could guide additional investment and support for local food, including the following:

All of this is not to mention the extensive planning about local food priorities conducted by Indigenous nations, local governments and communities in BC (many excellent examples of which are available on the province’s BC Food Security Gateway resource catalogue). In addition to the need to respect the jurisdiction and laws of Indigenous nations, it hopefully goes without saying that in all cases local people must guide how local food support takes shape on the ground.

The federal and British Columbia governments will eventually shift their focus from the current rightful priority of COVID-19 emergency response, to the task of supporting longer-term economic recovery. When they do, investment in sustainable local food systems should be among the important priorities for supporting employment in a manner that also helps us transition to a more resilient, just and ecologically sound future. Fortunately, we would not be starting from scratch.