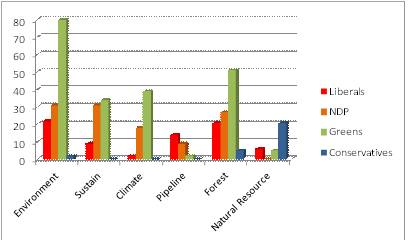 [Updated May 1, 2013 - Two separate people have suggested removing common terms from the word clouds so that words like "BC" and "government" don't overshadow the other words used.  We agree. We have updated the wordclouds, below, to remove "BC", "B.C.", "British Columbia", "government", and "Copyright" from the wordclouds.]

The BC New Democratic Party released its election platform on Wednesday (April 24th), the last of the four main parties to release its platform.

What? You don’t have time to read yet another election platform?  Well today is your lucky day, because this environmental law alert summarizes the platforms of the NDP, the Liberals, the Greens and the Conservatives into 4 handy, easy to look at word clouds.  (The words in the cloud are all taken from the Platforms – the larger the word, the more frequently it appears).

What’s the point of that?  Well, we’ll get into some of the details of the platforms in future posts, but we thought we’d start with a little meta-analysis.  Which parties are even talking about the environment, how much, and what words are they using?  Looking at the word clouds, you can get a sense of what’s driving each party.  This is not terribly scientific stuff, but it does give a sense of which parties see the environment as a central issue in this campaign.

In addition to the word clouds we’ll look at how often each party uses some environment-related terms (environment, sustain, climate, pipeline, forest and natural resources).*  To a certain extent, these counts are superficial, since a count tells you nothing about how the words are being used (for example, whether the party is in favour or against pipelines), but they do demonstrate the extent to which the party is talking about certain issues.  At the end you’ll find a graph comparing some of the environment-related words and phrases that each party has used.

We’ll start with the Governing Liberals, move through the Opposition New Democrats, and then to the Green and Conservative Parties.

Liberal Party of BC

The Liberal Platform – Strong Economy, Secure Tomorrow – is 94 pages long (including covers). Divided into 5 themes, the formal environmental section of the platform is found in a section entitled “A Safe, Clean, Healthy and Affordable B.C.”, but environment, land use and resource management issues appear in several of the other sections of the Platform.  Looking at the word cloud, terms like “debt”, “investment”, “business” and “LNG” (Liquid Natural Gas) emphasize the party’s attempts to position itself as a responsible economic manager.  Environmental terms are relatively absent from the word cloud.

The number of references in the Liberal Platform to our environment-related terms are as follows: Environment (22), Sustain (9), Climate (2), Pipeline (14), Forest (21), Natural Resource (6).

The BC New Democratic Party’s platform – Change for the Better – Practical Steps – is 68 pages, inclusive of covers.  “Opposing the Northern Gateway Pipeline and Fighting Climate Change” appears as one of its eight “key priorities”.  There are other potential references to environmental issues in these principles, including references to a “sustainable economy” and “healthy forests”.  The Platform also has a prominent “Protecting Our Environment” section, although, as with the Liberals, there is, of course, environment- and natural resource- related discussion elsewhere in the Platform.

The NDP word cloud seems to emphasize words like “support”, “We” and “communities”, suggesting an emphasis on compassion.  The words “environmental” and “climate” do appear near the bottom and top of the word cloud respectively, but are not as prominent as many other priorities.

The references found in the NDP Platform to our environment-related terms are: Environment (31), Sustain (31), Climate (18), Pipeline (9), Forest (27), Natural Resource (0 – although there are a number of references to the “Resource Economy”).

Green Party of BC

The Green Party Platform – The Green Book 2013 – is 49 pages long, inclusive of covers.  Sustainability, Ecological Wisdom and Respect for Diversity (which includes natural diversity) appear as three of the Green Book’s 6 core principles.  The main environmental section – entitled “Protecting our Resources” – is about 12 pages long, but environmental considerations are woven throughout the document (there is a discussion in the health section, for example, examining the link between climate change and mental health).

The Green Word cloud emphasizes “health” and “community”, among other things, but environmental terms are much more visible in this word cloud than in the others.  This is also the only word cloud of the four that does not include the names of one or more opposing parties – suggesting that the Green Party has not spent a lot of space framing itself as running against other parties.

Conservative Party of BC

The Conservative Party “pre-election platform” (apparently so-called because it was released before the writ was dropped) is titled “We Believe in B.C.”.  It is 28 pages long, including covers.  The “Developing B.C.’s Natural Resources” section is probably the closest that the platform has to an environment section, and it appears late in the Platform.

The Conservative word cloud emphasizes economic concepts – revenues, spending, budget, etc.  Other than the inclusion of the word “resources”, there are no obvious references to environmental issues.

The references to the environment-related terms found in the Platform itself are: Environment (2), Sustain (0), Climate (0), Pipeline (0), Forest (5), Natural Resource (21).

Here, to close, is our summary of who used our selected environmental terms, how often.

* Each word includes longer forms of the word (for example, sustain includes sustaining and sustainability, and forest includes forests and forestry).

This post is authorized by the West Coast Environmental Law Association, sponsor under the Election Act, 604-684-7378.