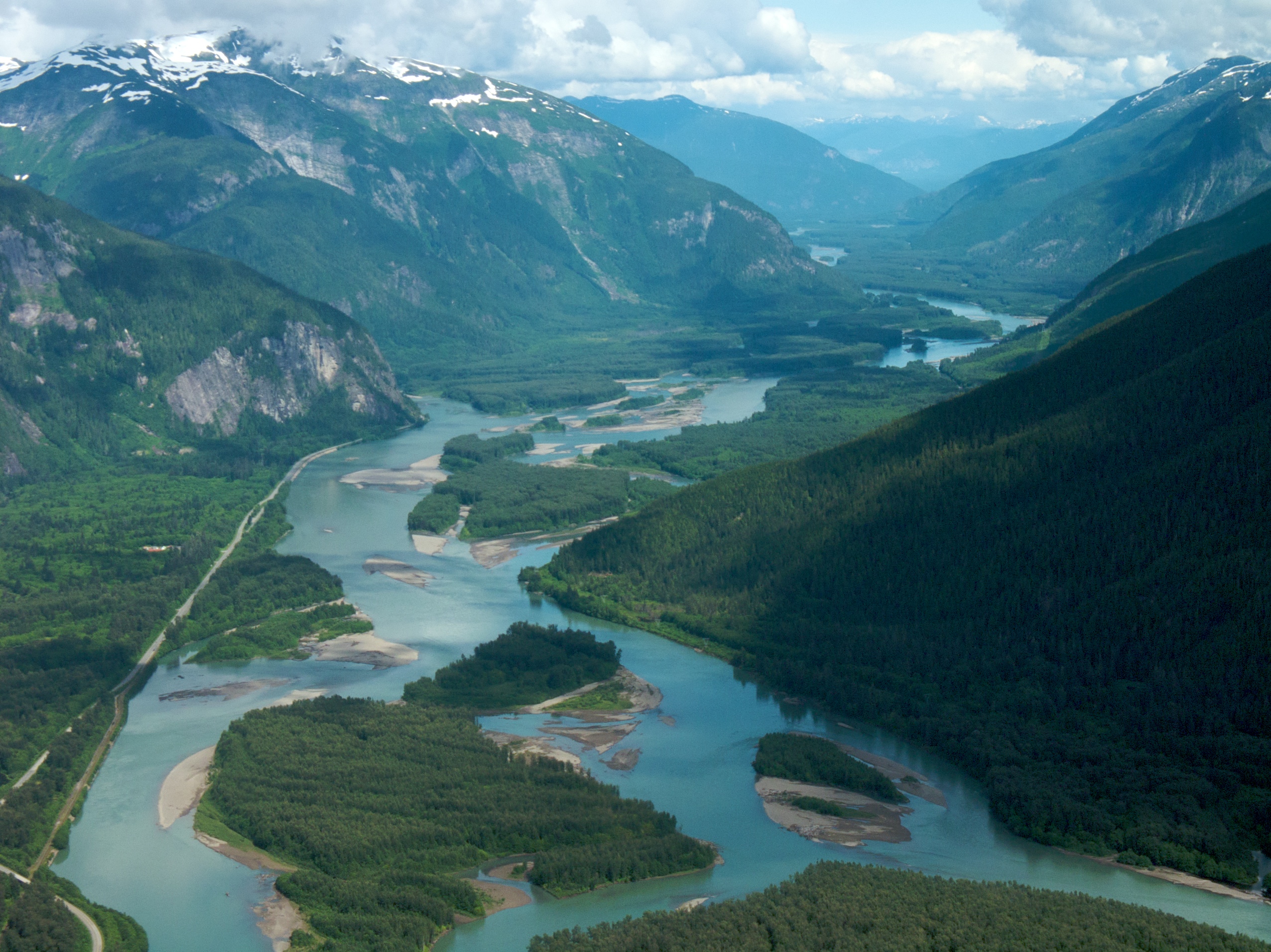 The Federal Court of Appeal ruled that the National Energy Board (NEB) had to reconsider its earlier decision that the proposed Prince Rupert Gas Transmission pipeline (PRGT) would not require a full NEB review. Ordinarily this would be a mere setback for the project, requiring further hearings. However, since the court ruling, in a development which may or may not be related, the Pacific NorthWest LNG facility (which the pipeline would service) was shelved as the proponent, Petronas, pulled out.

What was Michael up against?

The PRGT was a proposed 900-kilometre pipeline owned by pipeline giant TransCanada. It would have started in Hudson’s Hope, BC and ended at the Pacific NorthWest LNG liquefaction plant proposed for Lelu Island, near Prince Rupert.

The Pacific NorthWest LNG plant, and by extension the PRGT which would have been built to supply it, have been controversial since they were proposed. In addition to the general controversy over gas produced using hydraulic fracturing, and the climate-change impacts of LNG, the site of Pacific NorthWest LNG on Lelu Island sits next to important salmon habitat at the mouth of the Skeena River. There have been serious concerns about the impact of the project on the region’s fisheries. The federal government’s sign-off on the project has been criticized by one fisheries biologist as a “failure of process” that had not included the best available science. In addition, there is significant Indigenous opposition to the PRGT. 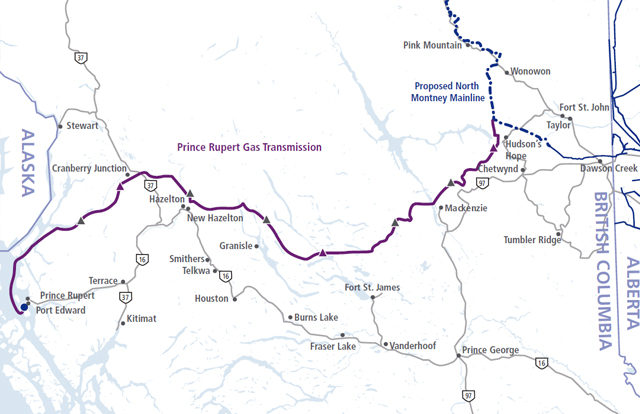 The PRGT would have supplied gas to Pacific NorthWest LNG by connecting into another proposed pipeline – the proposed North Montney Mainline extension (NMM). Because the NMM will extend an existing pipeline system that crosses between provinces, (the NOVA Gas Ltd. pipeline network) it is regulated by the National Energy Board. Accordingly, the NEB conducted a review of the NMM under the federal National Energy Board Act.

Likewise, the proposed Pacific NorthWest LNG plant also required NEB approval for natural gas exports. But somehow the PRGT, which connected the two projects, was not considered subject to federal regulation, and the NEB did not intend to review it.

Why did Michael go to court?

Michael became concerned that the proposed PRGT pipeline was only undergoing a provincial environmental assessment, when normally pipelines that connect inter-provincial networks to export facilities should undergo a review by the NEB as well. As a former environmental consultant, Michael felt that there was an arguable case that the PRGT fell under federal jurisdiction. But everyone, the NEB included, seemed to be simply assuming that it didn’t need to review the PRGT.

But that’s not what happened. The NEB panel acknowledged that seven factors pointed to the PRGT being under federal jurisdiction. However, they decided without much discussion that because of three other factors, the PRGT was a “local” project subject only to BC’s provincial regulatory regime.

Decisions by the NEB can be appealed to the Federal Court of Appeal with permission from the court, and that’s what Michael did.

The Court of Appeal told the NEB in no uncertain terms that it had made two big mistakes:

For these reasons, the Court sent the whole matter back to the NEB and told it to reconsider whether the PRGT was under federal jurisdiction.

What does this decision mean?

You could be skeptical that this was a victory. After all, the NEB was only ordered to reconsider whether it would hold a hearing to decide if it needed to conduct a full review of the PRGT.

And even if the NEB did decide to hold a full review, NEB reviews don’t have a great track record of balancing environmental and economic values. West Coast has been vocal about the NEB’s poor track record in managing energy projects for many years.

But despite these problems, this ruling was a victory.

First, because due process matters. The NEB cannot refuse to hear arguments that it has jurisdiction to hear. Further, the Federal Court of Appeal’s rebuke of the NEB’s errors in this case is something that the federal government should consider seriously as it looks to reform the NEB. The number and seriousness of the errors the NEB made in this case raise questions about its competence to be making such important decisions.

Finally, the week after this decision came down from the Court of Appeal, Petronas announced that it was not going to proceed with the Pacific NorthWest LNG plant. Petronas’ announcement focused on the dismal economics of exporting LNG in the present market, but I believe that Michael Sawyer’s victory made a difference too. The Federal Court of Appeal decision meant that TransCanada wouldn’t be wise to just start building the PRGT on the strength of its BC environmental certificate. This potentially gave rise to uncertainty for the proposed pipeline – leaving Pacific NorthWest’s already shaky economic calculations without a guaranteed supply of gas.

The Court of Appeal pointed out that it was not telling the NEB what conclusion to come to. But because of all the NEB’s legal errors, it would have been difficult for the NEB to reconsider Michael’s arguments and conclude that there wasn’t a prima facie case that it had jurisdiction over the PRGT.

Odds were good that the NEB would have held a full hearing. And after that hearing, which could take weeks or even months, the NEB might have decided that it needed to conduct a full review of the project. You can see how this added uncertainty and delay could have given Petronas pause.

In terms of why this is a win, let’s give Michael Sawyer the last word:

Mr. Sawyer was delighted by the court’s decision. “This shows that the NEB was too quick to dismiss a legitimate constitutional argument without a full hearing,” he said. “I’m convinced that PRGT is just one part of a massive natural gas export scheme that is clearly within federal jurisdiction and needs federal approval to proceed.”

“My approach to this is a principled approach,” he said. “I don’t think we should be exporting our natural resources, particularly energy resources, if we haven’t determined what’s in our public interest,” Sawyer said.

The respondents (TransCanada and the NEB) have 60 days from the date of the Federal Court of Appeal decision to request leave to appeal to the Supreme Court of Canada – i.e. until September 18, 2017. However, given that Petronas is not going ahead with the Pacific NorthWest liquefaction plant, it is uncertain whether the respondents will pursue an appeal. In the meantime, the PRGT will not be built without the Pacific NorthWest plant, so the question of whether the NEB should reconsider its decision is moot.