For the Ecotourism Industry and Tsilhqot’in First Nation of Taseko Lake; ‘No’ Means No | West Coast Environmental Law

News & Events » Environmental Law Alert Blog » For the Ecotourism Industry and Tsilhqot’in First Nation of Taseko Lake; ‘No’ Means No
Back to top

For the Ecotourism Industry and Tsilhqot’in First Nation of Taseko Lake; ‘No’ Means No 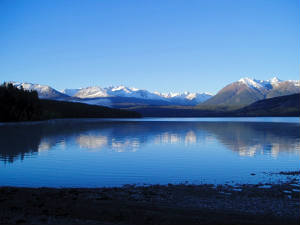 Industry and government are often quick to proclaim the jobs created by mines and other industrial operations, and to characterize environmental assessment and other environmental laws as ‘red tape.’ But it would be wise for them to remember, especially with projects located in remote areas of BC, that existing livelihoods risk being lost by a lenient provincial and federal assessment process.

On a recent return to Taseko Lake Lodge, 9-10 kilometres from Taseko Mines Limited’s (Ltd.) proposed mine site at Teztan Biny (Fish Lake), where I have worked in summers past, I developed a deeper understanding of the potential effects of the project proposal from the perspective of those with families, land and livelihoods in the region. I came to appreciate the close connection between the Tsilhqot’in First Nation and this area, and how it would be harmed by the New Prosperity Project. I also learned how the ongoing risk that Prosperity Mine may proceed is undermining local businesses working to develop wilderness tourism as a viable economic alternative to destroying the wilderness.

West Coast’s Environmental Law Alert has previously reported on the federal government’s refusal to accept the Prosperity Mine proposal, and on the many questions that need to be asked before considering any new proposal for a mine at Fish Lake. However, on August 26, 2011 the Canadian Environmental Assessment Agency (CEAA) accepted for review Taseko Mines Limited’s project description for ‘New Prosperity Mine’, a $1 billion gold-copper mine that the company says will not destroy Fish Lake.

In response to the approval, president and CEO of the company, Russell Hallbauer, outlined his hopes for the regulatory timeline ahead. “Under a comprehensive study, which is the process we expect for New Prosperity, the CEAA will have 365 days in which to complete its review and submit a final report to the Federal Minister of the Environment.” News that the New Prosperity Mine will be reviewed has already seen the company’s stock soar 17.34% on the Toronto Stock Exchange, suggesting high public confidence in an upcoming approval. To business owner’s relying on wilderness tourism and First Nations groups, however, this news comes as evidence that their ongoing opposition to the project is not being heard.

Although Taseko Mines Ltd. purports to appease opponents in its new project proposal by ensuring Fish Lake will not be drained, First Nations and Wilderness Outfitters have made it clear that the project would have harmful ecological consequences that extend far beyond the administrative boundaries of the mine site. The cumulative impacts of resource extraction and its supporting infrastructure, such as the contamination of groundwater systems, disruptions to species migration, air, noise and light pollution, would extend to adjacent provincial parks and sacred First Nation territory.

Ts'yl-os Provincial Park is one example of a surrounding area of protected land that would be negatively impacted.   The park is within the traditional territories of the Xeni Gwet'in, or Nemiah people, of the Tsilhqot'in First Nation. The park takes its name from the mountain known to Tsilhqot'in as Ts'yl-os (Mt Tatlow, 10043'), which in Chilcotin means, ‘people of the blue water,’ referencing the milky blue of newly melted glacier water in the rivers and lakes of the region.

Thinking back to summers spent riding, fishing and hiking in Ts'yl-os Provincial Park and the close connection that I personally developed to the land, I understand the strong opposition felt by the Tsilqot’in First Nation to New Prosperity Mine. The Tsilhqot’in remain adamant that the revisions in the New Prosperity Project do not adequately protect the land they depend on for fishing, trapping, hunting and cultural practices.

On Friday, August 26, 2011, the Tsilhqot’in National Government (TNG) called on the federal government to reject Taseko Mines Ltd.’s New Prosperity Project. Tribal Chair Joe Alphonse of the TNG stated “if the Canadian government wants to reduce its deficit, then cancel this process.  It will prevent the frivolous spending of tax money consistently being wasted to review a mine that will not go through.” “Surrounding our sacred lake with an open pit mine, preventing access to it for 33 or more years, destroying its fish spawning grounds and most likely destroying the lake later as it receives toxic tailings or the mine expands is clearly not an improvement,” said Marilyn Baptiste, Chief, Xeni Gwet’in.

Despite ignoring clearly stated opposition to the project, Taseko continues to purport to work in a ‘collaborative spirit with all interested parties.’

On my recent trip to Ts’yl-os Provincial Park, and the surrounding region I witnessed the beauty and sanctity of the lands of the Nemiah and Tsilqot’in people. I saw cultural practices that demonstrated the identity, connection and value they have invested in the land. A violation of their rights to protect it by the federal government is a breach to International as well as Canadian Constitutional law.

Wilderness Tourism in the Tsilhqot’in; the Struggling Emergence of an Economic Alternative

While Taseko Mines Ltd. highlights the short-term increase of jobs that would be created for the duration of its operation, it fails to provide information on the livelihoods that would be lost.

Speaking to business owners in the wilderness tourism industry at Taseko Lake, I heard evidence of how the government has prioritized industry stakeholders in the struggle between the development of conventional primary resource extraction and sustainable ecotourism.  Siegfried and Kelly Reuter currently work as guiding outfitters at Taseko Lake Lodge, originally built in the early 1920’s for fishing, hunting and wilderness tourism. Sig and Kelly hope to develop an industry that creates sustainable economic alternatives to the damaging effects of mining, while bringing international awareness to pristine wilderness of the Taseko Lake region.

Putting added emphasis on the provincial government, the couple discussed the ongoing obstacles that have been placed on their attempt to maintain and develop a business as guided adventure tour operators and managers of their wilderness lodge. As the lodge is located on crown land, Sig and Kelly have repeatedly applied to have the status of their residency upgraded from an occupational license to a lease to better establish their business. Sig states that as a result of the province either ignoring or refusing their application, potential shareholders are wary of investing in the company. Because the government reserves the right to remove the family from the land at any time, the decision to invest time, energy and funds into expanding the company is always uncertain.

Even with the new project description of ‘New Prosperity’, maintaining and marketing to international clientele looking to see some of the world’s last pristine wilderness will no longer be possible if the project proceeds. In a recent letter to Health Canada, Kelly stated “the majority of our lodge operating trails are along the Fish Creek watershed, as well as the meadows we use for grazing. Anywhere we take our guests from the lodge, up any mountain we climb or along any trails we hike with our clients we will have a direct view onto the entire mining operation.” Located nine kilometres from the proposed mine site, they have already been disturbed by the sound of explosives during the initial explorations of the site.

Guide outfitters from other wilderness tourism companies in close proximity to the mine, such as Tatlow Mountain Outfitters and Snowy Mountain Outfit  have also submitted letters and stated opposition under the previous application. Like Taseko Lake Lodge, they have yet to receive a response from either the company or the government.

Despite consistent and clear opposition from First Nations and local businesses, the New Prosperity website continues to acclaim its ‘commitment to the communities...it will benefit’ and purports to be engaged in a relationship of consultation. Kelly states that although it was thoughtful of a representative from Taseko Mines Ltd. to deliver a hard-copy of the new project description to her in person after it was submitted to the federal government, they do not consider this ‘consultation.’

With a project proposal for Prosperity Mine back on the table, local residents remain uncertain as to the economic future of the region.  In assessing the second application for the New Prosperity project, many hope CEAA will recognize that Taseko Mine Ltd.’s massive budget increase to prevent the draining of Fish Lake is not an acceptable solution.

Hiking through the aspen forests of the Tsilhqot’in on my last trip, I was once again struck by the untouched beauty of the Taseko Lake landscape. Although the New Prosperity project provides a solution for keeping Fish Lake intact, albeit surrounded by an open pit mine, there are broader issues than those related to preserving the lake itself. This application will influence the viability of developing sustainable economic alternatives that could provide income to the region, while showcasing the best British Columbia has to offer to the an international clientele. It is about the issue of the cultural identity and integrity the region provides for the Tsilhqot’in First Nation.  It is about the risk of losing one of the last places on earth where you can stop and drink glacier water from a forest stream.

As Annie Roy, spokeswoman for CEAA states “accepting the mine’s project is just one step in the process...we have until Nov. 7 to determine whether or not we’ll conduct an environmental assessment.” Although this is just one more small decision in a series of decisions which will determine whether New Prosperity will be able to proceed, it has important implications to the residents of the region. In its response to the New Prosperity Project description, the federal government has the opportunity to define its position on allowing conventional industry to overrun economic alternatives which sustain the protection of British Columbia’s wilderness.  Let this be a small decision where CEAA demonstrates it has the insight to say no.