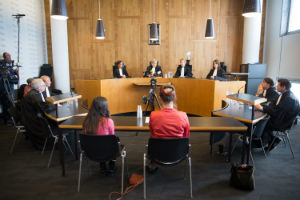 In a recent post, I wrote about the broad significance of the recent Dutch court decision ordering the Dutch government to reduce greenhouse gas emissions.

Due to the length and focus of that post, I didn’t get into specific findings made by the court that might be relevant to Canada and the Canadian government.  In this brief post, I think I’d like to mention some particular findings that seem relevant to Canada.

On the significance of national action by a smaller country

“[C]limate change is a global problem and therefore requires global accountability. … The fact that the amount of the Dutch emissions is small compared to other countries does not affect the obligation to take precautionary measures in view of the State’s obligation to exercise care. After all, it has been established that any anthropogenic greenhouse gas emission, no matter how minor, contributes to an increase of CO2 levels in the atmosphere and therefore to hazardous climate change. Emission reduction therefore concerns both a joint and individual responsibility of the signatories to the UN Climate Change Convention. … Moreover, it is beyond dispute that the Dutch per capita emissions are one of the highest in the world.” (para. 4.79)

On the need for aggressive early GHG reductions

Our government sometimes seems to prefer to defer short-term GHG emissions reductions, so the Court’s findings that early action is more cost-effective than waiting is important:

“… [I]n view of the latest scientific and technical knowledge it is the most efficient to mitigate and it is more cost-effective to take adequate action than to postpone measures in order to prevent hazardous climate change.  The court is therefore of the opinion that the State has a duty of care to mitigate as quickly as possible.” (para. 4.73)

On Carbon Capture and Storage

The Canadian and Alberta governments have often put a lot of faith (and investment) into Carbon Capture and Storage – a technology that captures carbon dioxide emissions and injects them underground.  The Court rejected the idea that such technology, due its uncertainty, can be relied upon in the short to mid-term:

“The court deems the State’s viewpoint that a high level of CO2 reduction can be expected to be achieved in the future through CO2 capture and storage insufficiently supported. Such an expectation would be relevant if it has been established that the use of these techniques would enable such a reduction that the emission between now and 2050 …”(para. 4.72)

On the role of a responsible government

In response to suggestions that the government is not a “causer” of climate change, in that emissions come from private actors, the court said:

…[T]he State has the power to control the collective Dutch emission level…. [A] high level of meticulousness should be required of [the State] in view of the security interests of third parties (citizens), including Urgenda. … Moreover citizens and businesses are dependent on the availability of non-fossil energy sources to make the transition to a sustainable society…. The State therefore playes a crucial role in the transition to a sustainable society and therefore has to take on a high level of care for establishing an adequate and effective statutory and instrumental framework to reduce the greenhouse gas emissions in the Netherlands.(para. 4.66)

On the threat of climate change

The court had no difficult grasping the threat posed by climate change to both current and future generations:

It is an established fact that climate change is occurring partly due to the Dutch greenhouse gas emissions. It is also an established fact that the negative consequences are currently being experienced in the Netherlands, such as heavy precipitation, and that adaptation measures are already being taken to make the Netherlands “climate-proof”. Moreover, it is established that if the global emissions, partly caused by the Netherlands, do not decrease substantially, hazardous climate change will probably occur. In the opinion of the court, the possibility of damages for those whose interests Urgenda represents, including current and future generations of Dutch nationals, is so great and concrete that given its duty of care, the State must make an adequate contribution, greater than its current contribution, to prevent hazardous climate change. (para. 4.89)

These legal findings may not be binding on the government of Canada, or on Canadian courts, in any direct sense.  But the fact that a court in one country in the world, having reviewed the evidence and considered the legal implications, is willing to require action on climate change is encouraging.  Canada would do well to listen to the findings of that court.

Related Post: Dutch climate court win - What does it mean for Canada?