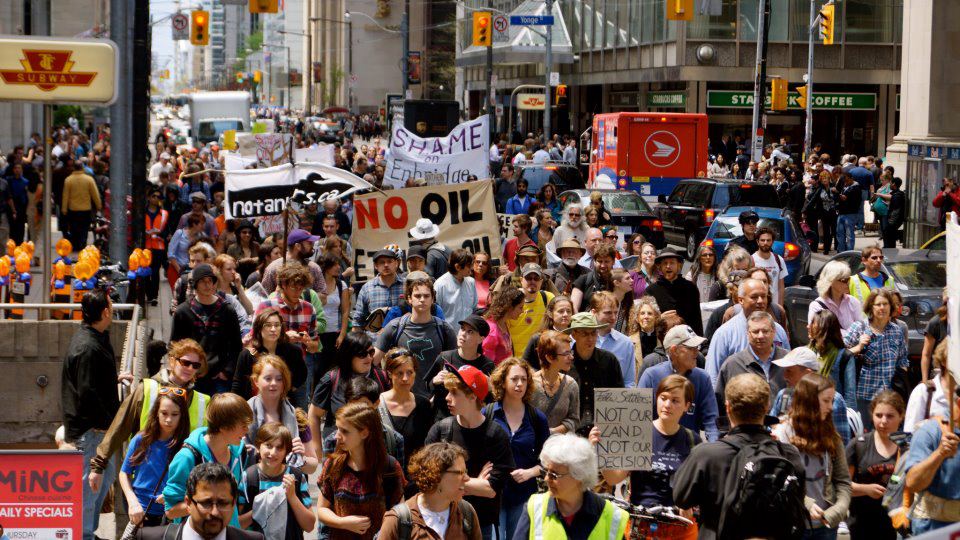 If you are an advocate for climate solutions, if you oppose tar sands pipelines and supertankers, or aspire to have a more balanced Canadian energy policy, you may have recently learned that the RCMP characterizes you as part of a harmful “anti-Canadian petroleum movement” made up of “peaceful activists, militants and violent extremists.” Like many other “peaceful activists”, West Coast Environmental Law* was shocked to see our name in a recently released RCMP memo, and by the implication – with absolutely no justification or evidence – that our efforts to safeguard the environment from the impacts of runaway climate change and the threat of oil spills are in some way linked to “violent extremists”.

The irony is that this type of inflammatory rhetoric – in a memo prepared by a special RCMP unit charged with protecting oil and gas industry infrastructure – may actually perpetuate the kind of more extreme views and actions it purports to be safeguarding against. Why? Because RCMP vilification of the law-abiding environmentalists undermines the “legitimacy” of the law enforcement agency itself, and lends support to a narrative that government authorities will not listen to environmentalists who work through legal channels.

The concept of “legitimacy” as a principle of law enforcement is well explained in Malcolm Gladwell’s best-selling book, David and Goliath. Gladwell’s book draws on accounts of a NYC police force dealing with crime by inner city kids and the IRA “troubles”, as well as principles of classroom management and other sources, to illustrate the “principle of legitimacy” for a lay audience:

When people in authority want the rest of us to behave, it matters – first and foremost – how they behave.

This is called the “principle of legitimacy,” and legitimacy is based on three things.

First of all, the people who are asked to obey authority have to feel like they have a voice – that if they speak up, they will be heard.

Second, the law has to be predictable. There has to be a reasonable expectation that the rules tomorrow are going to be roughly the same as the rules today.

And third, the authority has to be fair. It can’t treat one group differently from another.

Let’s look at each of these three criteria:

One of the disturbing features of the memo is that it vilifies not only violent, or even non-violent, but illegal, action, but also the “anti-petroleum” movement as a whole.  Thus, a key finding of the report is that:

There is a growing, highly organized and well-financed, anti-Canadian petroleum movement, that consists of peaceful activists, militants and violent extremists, who are opposed to society’s reliance on fossil fuels. The anti-petroleum movement is focused on challenging the energy and environmental policies that promote the development of Canada’s vast petroleum resources…

This statement treats both “peaceful activists” and “violent extremists” as part of a single “anti-Canadian” movement. Through this sleight of hand, the reader is left with the likely incorrect impression that “violent extremists” are highly organized and well-financed or are receiving funding or support from the wider movement.

The memo provides no information on what finances, or organizational capacity, “violent extremists” have. Instead, the memo spends a considerable amount of time providing information – much of it quite one-sided and questionable – about the finances, social media efforts and organizing of non-violent and law abiding organizations.

In general law enforcement professionals are cautious about making broad, unsubstantiated statements about links between law-abiding members of a community and violent extremists. In talking about “violent aboriginal extremists”, for example, the RCMP memo takes the time to explain:

In general, violent aboriginal extremists often do not have support within their communities, and traditional protest activity often is restricted to non-violent types of actions such as site blockades.

Similarly, the RCMP contributed this explaination of their role to a pamphlet intended for for Muslim youth and their families: “The RCMP does not target communities; we target criminal activity wherever it takes place.”

By contrast, the RCMP “anti-petroleum” memo seems to imply, incorrectly and with absolutely no evidence, that violent extremists have support within the broader environmental community, including access to their finances, social media and organizing tools.

By vilifying law-abiding environmentalists, the memo undermines the first principle of legitimacy – the belief that the authorities will hear and consider concerns raised through legal channels.

While we’re talking about “criminal” or unlawful activity, as the RCMP memo purports to – when it finally finishes discussing and attacking the broader environmental movement – it is interesting to shine a light on the petroleum industry itself. There are many legitimate legal concerns surrounding the enforcement of environmental laws in general and the expansion of the tar sands in particular. For example:

As we have written before, Canadians need to see that the laws protect not just the rights of large oil and gas companies, but also their rights too – including their right to a healthy atmosphere.

In both the Clayoquot and Kinder Morgan conflicts the protesters were driven by a sense that the law was not being applied in an even-handed way – industrial interests were being protected ahead of community interests. … I now see this as not simply a question of the protesters being upset about poor laws (although they were and are), but with being upset that the laws protect the rights of companies and business interests, but don’t protect the rights of the public.

Some of these perceived issues of unfair application of the law are not within the control of the RCMP.  However, the RCMP does have a role in enforcing environmental laws. And certainly the existence of a dedicated Critical Infrastructure Intelligence Team focused on the security of pipelines infrastructure, without any recognition (and, in fact, an implied denial) that the global atmosphere is itself critical infrastructure, gives an impression that the rights of companies are being given greater priority than the rights of the public.

The RCMP memo is a confidential document intended to brief, not the RCMP itself, or a government agency, but the oil and gas industry. The fact that we have a tax-payer funded unit within the RCMP preparing intelligence for a private sector itself raises some significant questions about fairness.  Moreover, the members of such a unit will, of necessity, be working very closely with the oil and gas industry and their security staff – exchanging information and building relationships. As such, it may be challenging to maintain objectivity and independence.

Consequently, the tone, and indeed, the downright misinformation and potentially defamatory statements made in the RCMP Memo, is critical in evaluating whether the fairness of this unit has been compromised.

Others have documented many of the inaccuracies, so we’ll just agree with the summary of this excellent review by Press Progress of the 9 weirdest things about this RCMP intelligence report:

[A] closer look at the intelligence assessment reveals much of the report relies on information patched together from sources like oil industry lobbyists and media outlets sympathetic to the oil industry -- in some cases leading to bizarre conclusions.

The RCMP does not demonstrate its fairness when it:

We expect better from the RCMP

We expect the RCMP to be fair, to behave in a manner that justifies the trust we place in it, and to remain arms-length from the partisan agendas of politicians. The RCMP knows better. That’s why the vilification of an entire movement – a movement which is non-violent and attempting to build a better world – is so disturbing.

* - The RCMP report relies heavily on materials published in the National Post that mention, among others, our sister organization, the West Coast Environmental Law Research Foundation.