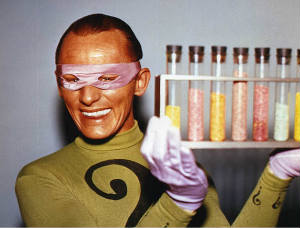 Health Canada is in the process of re-evaluating large numbers of old pesticides. Every so often they will put out a Re-evaluation report for public comment, and we’ve been reading Health Canada’s proposed decision in its re-evaluation of the risk levels of the pesticide Dimethoate. And frankly there are a few riddles buried in this technical document that have us scratching our heads.

The public should be concerned.   While the industry voluntarily stopped selling Dimethoate for household use in 2004, Health Canada’s proposed decision could allow the continued agricultural use of the pesticide on a wide range of crops.  Dimethoate is one of a class of pesticides known as organophosphates that are under increasing scrutiny around the world due to their known health impacts – especially the way in which they disrupt nerve function.  The Pesticide Action Network lists Dimethoate as a “bad actor”and several countries are cracking down on it.

We don’t usually make submissions on specific pesticides, but this Re-evaluation report concerned us so much that we’ve written to the federal government expressing our concern and asking a series of questions.  You can too – the government is inviting submissions until October 25th, 2011.

Some of the riddles posed by the report are about how we can be sure that Dimethoate is safe when:

We didn’t say that they were funny riddles.  :-(

The Re-evaluation report at one point examines the different ways that members of the public might be exposed to Dimethoate, including exposure from food and drinking water, and evaluates that exposure against the “acute reference dose” – which is the level at which toxic effects might be expected to show up (allowing for a safety buffer):

One would expect the report to address this topic further – explaining whether they were using the water modelling data, the water monitoring data (which the Re-evaluation report acknowledges “likely underestimates potential peak exposure”, or some combination of the two.  One would also expect Health Canada to explain why it was recommending approval of a pesticide where infants could be exposed (albeit under worst case scenarios) to over 4 times the level that they’ve identified as safe (and even adults could receive a higher-than-safe exposure).

But they haven’t.  We’ve asked them why.  We’ll let you know what they say.

Riddle #2 – the Birds and the Bees

The Re-evaluation Report clearly finds that Dimeothate is toxic to many aquatic and terrestrial organisms, including bees, birds, mammals, and aquatic organisms.  The Report proposes modifying the label to caution:

TOXIC to bees. Bees can be exposed to product residues in flowers, leaves, pollen and/or nectar resulting from soil and foliar applications.

TOXIC to birds, mammals and aquatic organisms. Observe buffer zones specified under DIRECTIONS FOR USE.

Dimethoate poses risk to terrestrial and aquatic organisms. In order to minimize the potential exposure, strips of land between the agricultural field and the aquatic areas will be left unsprayed.

However, while buffer zones around streams may provide protection for aquatic organisms, we cannot see that this measure provides any protection for bees, birds or terrestrial mammals.

We’ve asked Health Canada to explain.  We’ll let you know what they say.

The Re-evaluation report recognizes that Dimethoate may have health and environmental impacts in concert with other, similar, pesticides.

It only makes sense that Dimethoate’s risks cannot be fully evaluated without considering other organophosphates that people and ecosystems might be exposed to: organophosphates all operate in a similar way, disrupting the nerve function of its victims.
However, the Pest Control Products Act doesn’t appear to allow Health Canada to ignore the impacts of other pesticides in determining whether a pesticide will pose an unacceptable risk.  The onus is on the pesticide manufacturers to demonstrate that their products will not create such a risk.

We’ve asked Health Canada how they can approve Dimethoate without assessing its impacts in concert with other organophosphates.  We’ll let you know what they say.

Riddle #4 – So what does that mean anyhow?

Having recognized that Dimethoate is acutely toxic (it is poisonous), Health Canada tries to reduce the risks of this toxic substance to a manageable level by putting in place restrictions on how it is to be used.

Only one problem: many of those restrictions are so vague as to be both meaningless and impossible to enforce.

Apply only when the potential for drift to areas of human habitation or areas of human activity such as houses, cottages, schools and recreational areas is minimal. Take into consideration wind speed, wind direction, temperature inversions, application equipment and sprayer settings.

At the risk of stating the obvious – do we really want to leave it up to pesticide applicators to determine what is “minimal potential” for drift?

Interestingly, the Re-evaluation report does not consider drift as a possible way that the public, or workers, might be exposed to Dimethoate, so Health Canada must have a pretty high level of confidence in the abilities of pesticide users to follow this type of vague condition.

The federal Commissioner on Environment and Sustainable Development criticized Health Canada for similarly vague language in 2003.  It appears that the department has not learned its lesson.

We’ve asked Health Canada how it can assume that such vague conditions provide any real protection for human health or the environment.  We’ll let you know what they say.

Protecting our health and environment shouldn’t be a riddle

The public relies on Health Canada to ensure that pesticides don’t pose risks to human health and the environment.  And yet each year a documented 6000 Canadians suffer from pesticide poisoning – half of them children – and the real number is probably much higher.

If this Re-evaluation is typical, then it appears that Health Canada is not making sure that it has the full answers to important questions before it approves pesticides for use in Canada.   Re-evaluation reports should be complete, clear and well reasoned.  They should not raise more questions than they answer.

And we’re telling Health Canada so.  We’ll let you know what they say.

Photo of Frank Gorshin as the Riddler in the 1966-67 TV Series, Batman, produced by 20th Century Fox Television and Greenway Productions.