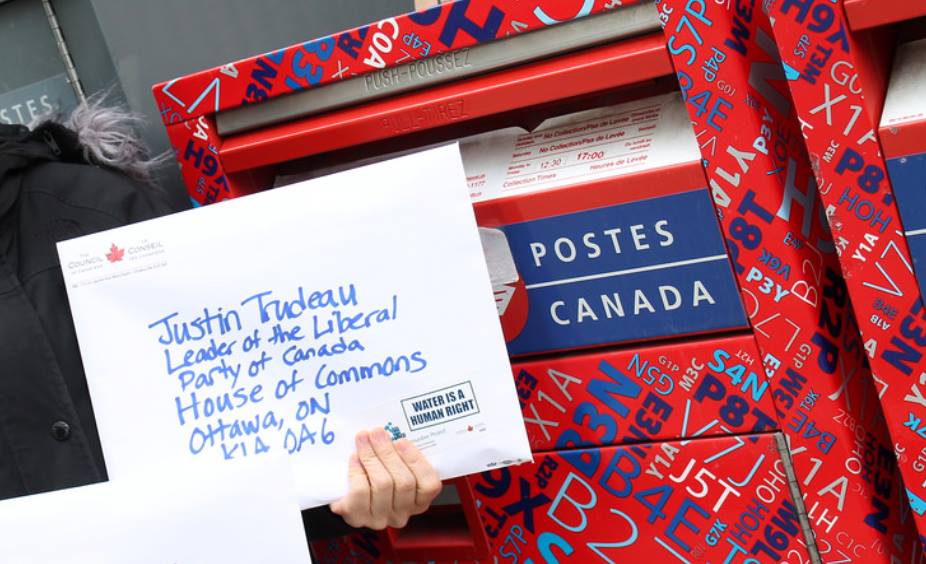 On October 19, 2015 Canada elected our 23rd Prime Minster, Justin Trudeau on a platform of change and open and honest government. The “open letter” storm that followed that election and the subsequent transition in government may inadvertently save Canada Post’s dwindling letter mail business.

Shortly after casting her ballot on October 19, a BC woman wrote an open letter to Mr. Trudeau setting out her top ten requests of the soon-to-be Prime Minister, including requests for stronger environmental and energy policy. The letter has since gone viral, with nearly 47,000 shares and 54,500 likes, and Mr. Trudeau personally responded within a week of the election, following up with an open letter to all Canadians released on his first day in office. In his open letter, he wrote:

Over the course of the campaign, we promised you a government that will bring real change – in both the things we do and the way we do them. […] On Election Day, you sent a clear message, and you rightly expect us to fulfill our promises.

I am writing to you, today, to reaffirm my commitment to spend the next four years working hard to deliver on those promises.

Prime Minister Trudeau made many promises during his election campaign, and a number of open letters on a wide range of issues have been delivered to his inbox in the week since his swearing in, with many more surely to come.

West Coast Environmental Law Association has signed a number of letters, as we look forward to positive engagement with the federal government to ensure the lasting legal protection of our environment.

In particular, we were one of 100 signatories to an open letter released on November 12th, that asked Mr. Trudeau to fulfil his promise to fix our broken regulatory system through a public review in full partnership with First Nations by first stopping the maligned Kinder Morgan and Energy East review processes before they go further down the rabbit hole. In the letter, we write:

We are writing to request that you immediately stop oil pipeline reviews currently underway, including Kinder Morgan’s Trans Mountain and TransCanada’s Energy East proposals, and fix the problems and weaknesses in the environmental assessment process identified through a public review process.[…]

We are looking forward to working with you and Indigenous Peoples to ensure this public review process is comprehensive and is conducted in an open, collaborative manner, informed by the best available scientific and Indigenous knowledge, in order to fix our broken regulatory regime.

A meaningful review of regulatory law, policies and operational practices should result in a regime that assesses all proposed projects and policies for their potential individual and cumulative impacts and positive contribution to sustainability. This would include reviewing upstream and downstream greenhouse gas emissions, enabling early, ongoing and meaningful public participation and ensuring the ability of Indigenous Peoples to exercise their decision making authority according to their respective laws and governance systems. This review is also an opportunity to undo the damage done by your predecessor to our environmental laws, including but not limited to CEAA, the NEB Act, the Fisheries Act and Navigable Waters Protection Act.

We were encouraged by Mr. Trudeau’s recognition that the regulatory system is broken and that it does not enjoy the confidence of the public, when he recognized in his platform that “While governments grant permits for resource development, only communities can grant permission.”

As the NEB process continues for Kinder Morgan, with final arguments scheduled to start in December, the request to stop those processes while the regulatory review takes place not only makes common sense, but will save the 400 intervenors, and Kinder Morgan for that matter, further wasted time and resources.

This is something that former Kinder Morgan NEB Intervenor Robyn Allan also discussed in her own open letter on the topic. The City of Burnaby also wrote to Mr. Trudeau with a similar request.

West Coast was also one of 30 signatories to an open letter supporting Mr. Trudeau’s commitment to a legislated oil tanker ban on BC’s north coast. The open letter was sent just hours after the public release of the new Cabinet’s mandate letters, in which Mr. Trudeau directed multiple Ministers to “formalize a moratorium on crude oil tanker traffic on British Columbia’s north coast” as one of their “top priorities”, indicating the government’s intention to deliver on its campaign promise on the issue and adding yet another nail in the Enbridge Northern Gateway coffin. The open letter states that by committing to introduce a legislated oil tanker ban, Mr. Trudeau is:

[S]tanding with First Nations, northerners, unions, municipalities, businesses, environmental groups, faith groups and people from across British Columbia and all of Canada that have said the risks of the Northern Gateway project to our ecosystems and economy are simply too great.

Open letters alone will not change the world, although once and a while they can significantly alter the consciousness of a nation. What they can do is establish a tone, and set the stage for further engagement and action in a public and transparent manner.

It wasn’t all that long ago that Canada’s former Minister Natural Resources famously penned an open letter calling anyone who opposed any pipeline, mine, forest practice, oil and gas development or hydro-electric dam a “radical group” with a “radical ideological agenda.”

In that letter, former Minister Oliver closed with the following:

Our regulatory system must be fair, independent, consider different viewpoints including those of Aboriginal communities, review the evidence dispassionately and then make an objective determination.  It must be based on science and the facts. […]

Unfortunately, the system seems to have lost sight of this balance over the past years.  It is broken.  It is time to take a look at it.

It is an urgent matter of Canada's national interest.

Ironically, parts of Mr. Oliver’s letter acknowledged that Canada’s environmental regulatory system was broken and unbalanced, yet his government approached the problem by ramming through legislative changes, with limited debate, that reduced environmental safeguards and scaled back public participation in environmental decision-making. Suffice it to say that, in order for the new federal government to get to the root of problems with Canada’s environmental laws this time around, it will need to follow up on its open letters with an open process for reform.