Dear President Obama: In Canada climate change affects none of our decisions 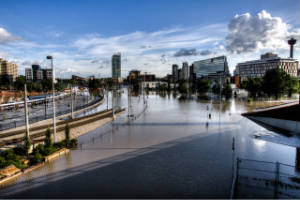 When U.S. President Obama met with Prime Minister Harper earlier this week, he highlighted the importance of considering climate change in key energy decisions, like the Keystone XL.  The President said that climate change “has to affect all of our decisions at this stage because the science is irrefutable,” but was polite enough not to highlight that Canadian energy decisions do their best to ignore climate change.  We can see this in recent decision-making related to the tar/oil sands, pipelines and tankers, and coal ports, with many federal government decision-makers insisting that they do not have the legal authority to consider climate change.

Some recent decisions about fossil fuel extraction and infrastructure

Interestingly, even some prominent energy experts were still surprised to learn last week (in the Burnaby Now) that the environmental assessment of the Kinder Morgan Pipeline will not consider climate change.  Here’s an exchange on Twitter between UBC Professor George Hoberg and journalist Stephen Leahy on the surprising (or perhaps not so surprising) decision to ignore climate change in the Kinder Morgan Pipeline assessment:

As Stephan Leahy points out, the assessment of a recent major tar sands mine expansion failed to consider climate change impacts as well.  While some oil sands environmental assessments do look at the direct GHG emissions, they do not look at the GHGs that will be produced when the product (diluted bitumen) is processed, shipped and used.  Similarly, the environmental assessment for the Enbridge Pipelines and Tankers Project considered GHG from the pipeline’s construction and operations, but not from the extraction, processing or use of the oil that will be shipped through the pipeline (Environmental organizations are challenging the failure of the Joint Review Panel to consider the oil sands GHG emissions resulting from the Enbridge proposal).

“We’re not addressing climate change in this hearing. That’s been laid out really clearly in the list of issues,” said Sarah Kiley, a spokesperson for the National Energy Board. “If you have a concern about climate change, we don’t have a mandate to regulate for that. Our mandate is pretty specific. We regulate pipelines that cross either an inter-provincial or an international border. We do exports, we do tolls and tariffs and a certain number of different things.”

Similarly, the Vancouver Coal Port Authority, in considering the Neptune and Fraser Dock Coal Ports has maintained that it has no legal authority to consider the impact of that coal travelling through the port would have on climate change:

Port Metro Vancouver recognizes that some citizens or groups may have concerns about the types of commodities that are traded through the Port. This dialogue should take place between the people of Canada and senior levels of government, as it falls outside the scope of Port Metro Vancouver’s jurisdiction.

Contrast Port Metro Vancouver’s approach with the environmental assessment being

done in respect of proposed coal ports just across the U.S. border, in Washington State, which will consider the global climate impacts of the proposed facilities.  Or compare the Enbridge and Kinder Morgan Assessments with the Keystone XL State department report which considered the impacts of the pipeline on global GHG emissions at length.  The State Department concluded that the expansion of Canada’s Tar/Oil Sands will have a negative impact on the global atmosphere, but then argued (controversially) that those expansions may take place even if Keystone XL is not built – due to either the construction of other projects (such as the Enbridge or Kinder Morgan Pipelines) or the dramatic increase of transport of bitumen by rail.

Why climate change can’t be ignored

And even if you personally might want to ignore the effects of burning all of these fossil fuels, how the world responds to climate change has a direct bearing on the economics and costs/benefits of fossil fuel infrastructure.  All of these assessments and decisions (including the Keystone XL review) assumed that any costs associated with fossil fuel production will be borne by others, and that only market forces will constrain future oil sands production.

You may have heard of the “Carbon Bubble” – the idea that investors and companies that measure their value by reference to fossil fuel reserves may be in for a rude awakening when it turns out that those reserves are “unburnable.”

The so-called "carbon bubble" is the result of an over-valuation of oil, coal and gas reserves held by fossil fuel companies. According to a report published on Friday, at least two-thirds of these reserves will have to remain underground if the world is to meet existing internationally agreed targets to avoid the threshold for "dangerous" climate change. If the agreements hold, these reserves will be in effect unburnable and so worthless – leading to massive market losses. But the stock markets are betting on countries' inaction on climate change.

But it’s not just stock markets betting on global inaction on climate change.  It’s governments – and notably the Canadian government – in assessments and decision-making that pretend that you can evaluate the economic benefits of pipelines, tankers, coal ports and other fossil fuel infrastructure without reference to the carbon that they carry.  As observers note in relation to Canada, the oil sands and oil sands infrastructure:

When you stop to think about it, [the carbon bubble is] a big, big problem for Canada, the financial markets, and the world’s climate system. For Canada, it means that an over-reliance on the tar sands as an economic drive is a huge risk if the world ever regulates greenhouse gas emissions. It doesn’t make a ton of sense to build your economy around a product that can’t be sold or used.

But it’s not just the possibility that international agreements to regulate greenhouse gases might be implemented that could affect the economic value of these pipelines.  There’s also the fact that these products are already contributing to trillions of dollars in damages, and hundreds of thousands of deaths, globally, and that there is therefore a very real possibility that fossil fuel companies – or the companies that transport their product – will be required to pay compensation for the damages that their products are causing.  James Early of YYCeLaw recently speculated:

[T]he floods that ravaged Calgary and Southern Alberta in June 2013, caused at least $1.7 billion (yes, that’s $1,700,000,000.00) in damage and losses making it the most costly Canadian natural disaster on record. … It can surely be only a matter of time before a significant legal challenge is brought in Canadian courts on the issue of climate change. One could argue that there are 1.7 billion reasons to explore that possibility in the coming months.

There’s an increasing sense that such lawsuits might target fossil fuel companies, and possibly the companies that transport fossil fuels.

What would multi-billion dollar lawsuits against fossil fuel companies or pipeline companies do to the rosy economic picture painted in the Enbridge Joint Review Panel report?  Could we still maintain that the climate-related damage caused by coal shipped from Port Metro Vancouver is irrelevant to the economic case for the coal ports?

International climate negotiations are also increasingly focusing on the reality that these fossil fuels are causing loss and damages – with the establishment of the Warsaw loss and damages mechanism last November.  While this new international agreement says nothing, at this stage, about who will pay for those losses and damages, the Canadian government (among others) was apparently very worried during negotiations that the answer might be the countries that are causing the emissions.

The question of whether to establish a new global mechanism [on losses and damages] has caused deep divisions, because richer nations fear it could be used to make them pay compensation for the consequences of their planet-warming emissions to poorer countries suffering the worst impacts of more extreme weather, rising seas and gradual environmental changes such as desertification. [Emphasis added]

One can expect international climate negotiations to increasingly grapple with those difficult questions.  And yet, the Canadian government’s decision-making assumes that the emissions caused by fossil fuel projects and infrastructure are irrelevant to determining whether those projects are in Canada’s national interest or not.

Our decisions can’t count benefits, but ignore the costs

The reality is that building fossil fuel infrastructure, and dramatically expanding the oil sands, cannot be divorced from the consequences of those actions.  Only in the short-term can we pretend that it’s possible to consider the public benefits of a pipeline while ignoring the question of who will need to pay for the climate change it causes.

Canadians would all benefit from a decision-making framework that transparently and realistically assessed the costs of the fossil fuel future that we are building.  Right now our government seems to be tallying up the benefits side of the equation, but ignoring the costs side.