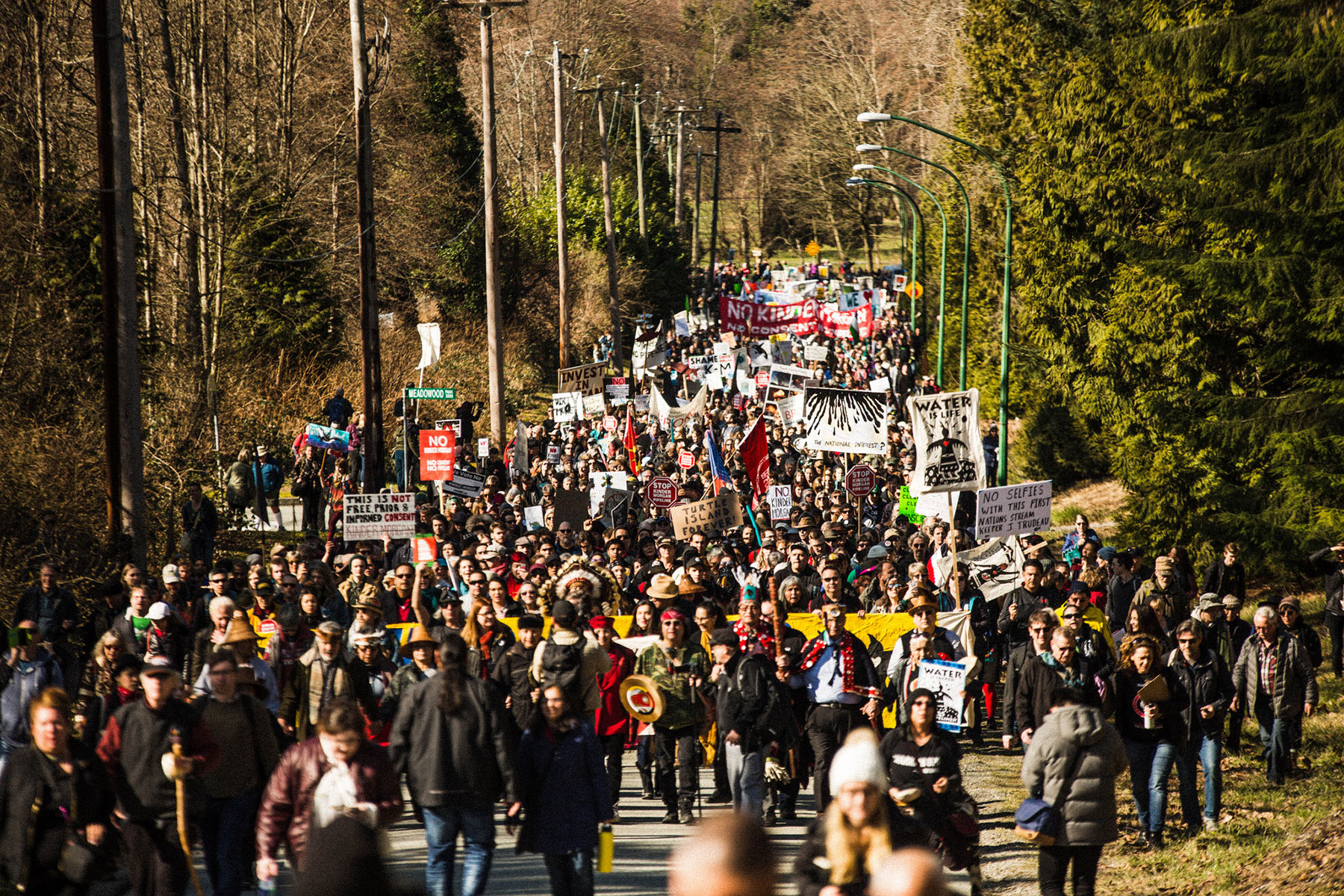 Things are heating up in the battle to stop Kinder Morgan. At time of writing, dozens of water protectors have been arrested for violating a court injunction issued last week. Here is a recap of how we got here.

On March 8th, 2018 Kinder Morgan filed a Notice of Civil Claim naming fifteen individuals (dubbed “the Burnaby 15”) and accusing them of nuisance, conspiracy and unlawful interference with economic relations. These civil claims gave Kinder Morgan the legal grounds to seek an injunction to limit access around Kinder Morgan’s work sites in Burnaby until a future trial of the civil claims, also known as an interlocutory (or interim) injunction.

Note that it is possible, but by no means certain that a company obtaining such an injunction will actually proceed to court once the objective of restricting protest is achieved, but the threat of civil damages remains. This type of lawsuit is a common form of SLAPP, or strategic lawsuit against public participation in British Columbia. Just this month, West Coast joined over 40 other organizations to send an open letter to the BC government supporting their commitment to introduce anti-SLAPP legislation in BC.

On March 9th, 2018, BC Supreme Court Justice Kenneth Affleck adjourned the hearing on the injunction until Wednesday March 14, but put in place an ‘interim-interim’ injunction that prohibited blockades and created a no-go zone of 50 metres from Kinder Morgan properties, including the Westridge Marine Terminal, Burnaby Terminal (Burnaby Tank Farm) and the Kask Brothers staging site.

Kinder Morgan’s lawyer Maureen Killoran argued that the injunction zone was necessary to prevent further blockades of roads that had already delayed the company’s tree cutting work that was time sensitive. The NEB summarized Kinder Morgan’s timing in its decision to grant permission to begin clearing work:

Trans Mountain identified the WTP [Westridge Tunnel Portal] site as a priority for the Project and indicated that approval by 15 February 2018 would allow sufficient time for the WTP site clearing activities, estimated to take four to six weeks, to be completed prior to the migratory bird restrictions which come into effect on 26 March 2018. Trans Mountain indicated that if it was unable to complete clearing activities for the WTP site prior to that date, the development of the WTP site could be delayed until after the close of the window in August 2018. Due to the sequencing of activities for the entire Burnaby Tunnel Phase, a commencement of tree clearing after the end of the migratory bird restriction could result in further delays for Phase 39.

See below for images of the 50m injunction zone (courtesy of Wilderness Committee): 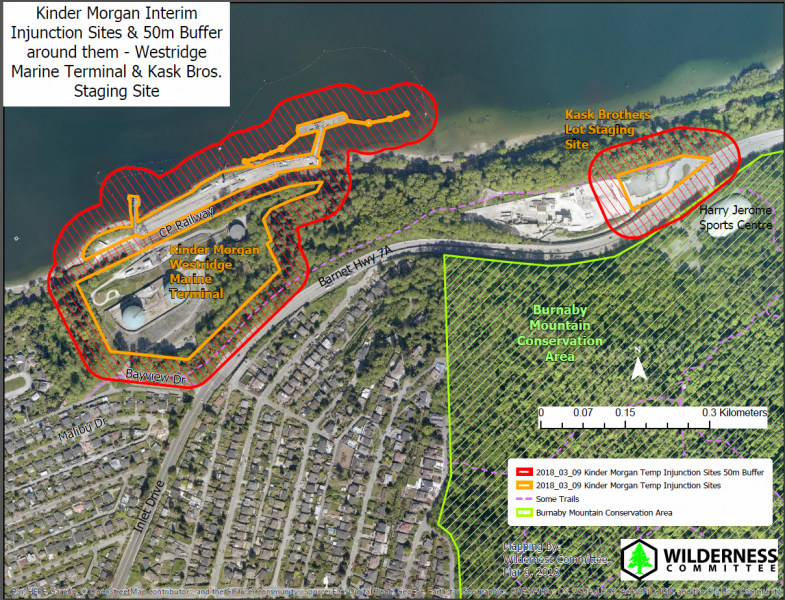 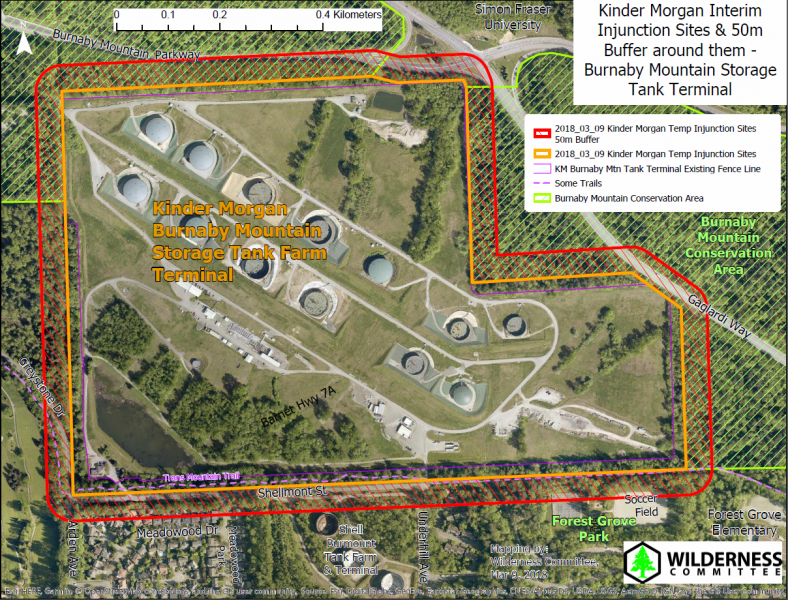 Thousands march to Protect the Inlet

On Saturday March 10th, I marched with thousands of people from all walks of life united in our opposition to the Kinder Morgan Trans Mountain pipeline and tanker project. It was an inspiring and beautiful day, and the peaceful march travelled through public roads and parks near the Kinder Morgan terminal in Burnaby, where the company had just been granted an injunction.

Coast Salish Water Protectors, including elders, youth and spiritual leaders built a watch house during the event. The gathering was an inspiring and energetic moment that kicked off the next phase of Kinder Morgan resistance. 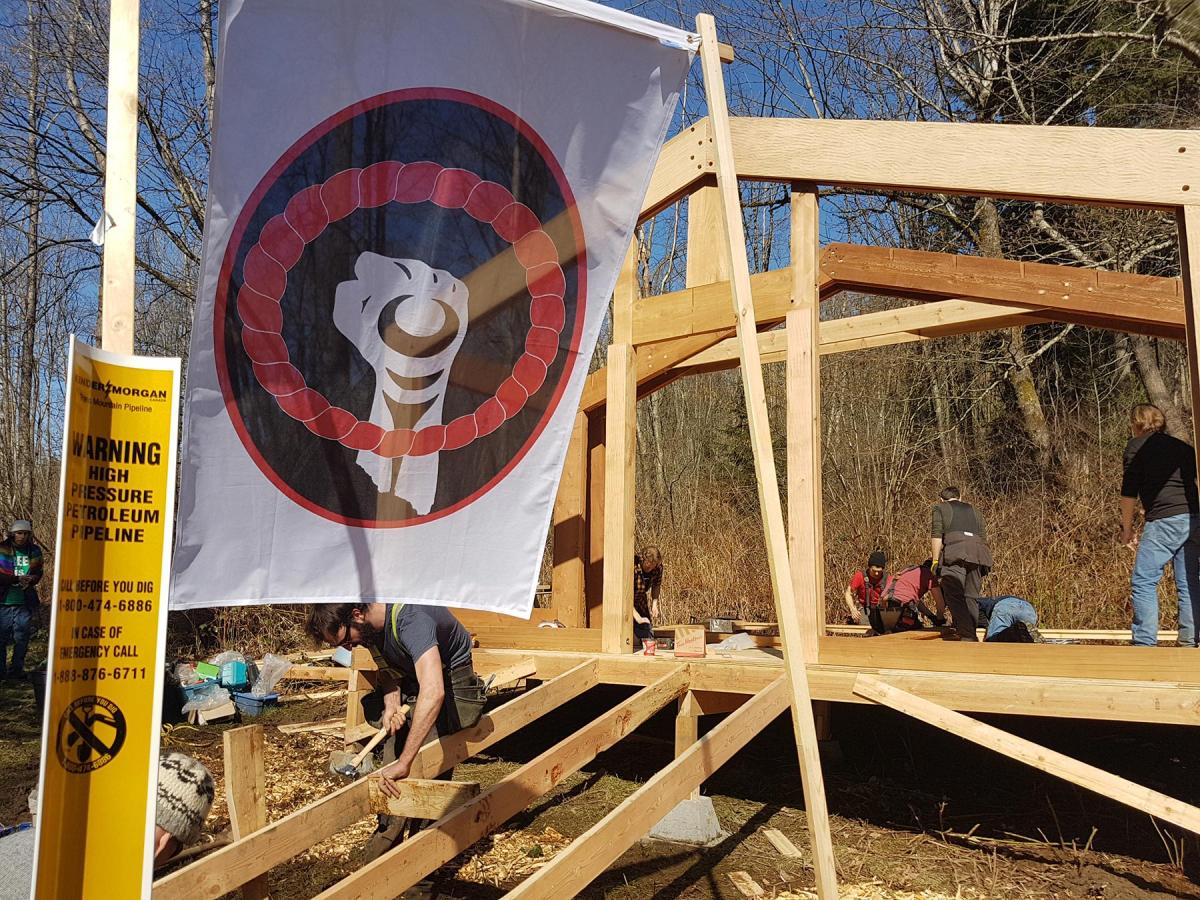 On March 14th and 15th, Kinder Morgan was back in BC Supreme Court for the hearing on the interlocutory injunction. At the end of two days of argument, the judge maintained the injunction, but reduced the no-go zone (or buffer zone) to 5 metres from 50 metres, starting from Kinder Morgan’s property line, which they must “clearly mark and delineate.”

The order expressly excludes any private property, public trail or public roadway from the injunction buffer zone. Justice Affleck also denied Kinder Morgan’s request to include the authority to remove the Watch House and other structures around the Kinder Morgan sites, stating that the company would have to endure some inconvenience, that opponents had a right to ‘protest vigorously’, and that the Watch House was of ‘considerable significance’.

At one point during the hearing, self-represented defendant Gordon Cornwall, a retired software company owner, explained to the judge why he was opposed to the pipeline. He discussed the impacts on climate change connected with the expansion of the oil sands and raised last summers’ wildfires in BC as an example of how climate change is impacting us now. Mr. Justice Affleck interrupted, stating “You needn’t convince me of the terrors of last summer. My home in the Cariboo burnt down.”

Other defendants in the injunction hearing included educators, engineers, parents, and a rabbi. Check out this article to learn some of their stories.

As lawyers, our legal ethics obligations mean that we cannot advise clients or others to engage in civil disobedience. We do, however, recognize that civil disobedience has historically been an effective tactic for systemic change, from suffragettes to the civil rights movement, to Gandhi’s Salt March to anti-apartheid movement in South Africa. More recently, civil disobedience has been used as a tactic to address the existential threat of climate change, notably at the White House sit-ins.

It should not be a surprise that residents are resorting to these measures. Over 23,000 people signed a pledge to ‘do whatever it takes’ to stop Kinder Morgan. And a recent poll confirmed that 1 in 10 British Columbians would consider acts of civil disobedience or stop construction.

And contrary to what Jason Kenney, Joe Oliver and others say in their hyperbolic rhetoric, these are not “Russian operatives”, “militant radicals” or “foreign agitators” – they are grandparents, retired school teachers, students, former Trans Mountain employees and religious leaders from all walks of life.

In many cases, these water protectors have engaged in good faith in the flawed NEB process, the Ministerial Panel, in writing to their MPs and other avenues, only to have their concerns ignored, dismissed or diminished.

WCEL staff lawyer Andrew Gage was one of the arrestees at Clayoquot Sound in 1993. He reflected on this experience in a previous blog, in which he says:

As the Supreme Court explained in a leading case, the violation of a court order becomes criminal contempt when it is: “open, continuous and flagrant … without regard for the effect that may have on the respect accorded to edicts of the court.”

A symbolic, non-violent violation of the law, done deliberately in protest against some form of perceived injustice. Mere dissent, protest, or disobedience of the law does not qualify. The act must be nonviolent, open and visible, illegal, performed for the moral purpose of protesting an injustice, and done with the expectation of being punished.

According to the Supreme Court, it is the “open, continuous and flagrant” nature of the contempt that gives rise to an undermining of “the respect accorded to edicts of the court.” But those engaged in civil disobedience, it may in fact be the openness and visibility, along with the expectation of being punished for the disobedience, that actually affirms respect for the courts and the law.

Although the manner of civil disobedient is sometimes defiant, their conduct is more often a manifestation of respect for the law than of contempt for it. Realizing that the law he breaks applies to him, the civil disobedient violates it knowingly in an effort to correct what he believes to be a wrong infinitely worse than the one he commits, and thereby to improve the system of laws. … In accepting punishment the civil disobedient further demonstrates his respect for the system of laws – a system he seeks to better and strengthen, not subvert or destroy.

However, to date the courts have not taken this view, and those violating injunctions such as the one obtained by Kinder Morgan commonly find themselves in court facing contempt of court charges. For this reason, anyone considering civil disobedience should inform themselves about the consequences, which can be serious. One great place to start is the Protestor’s Guide to the Law of Civil Disobedience in BC.

Finally, it is worth reiterating that provided the court order is complied with, all persons are free to engage in peaceful protest of the Kinder Morgan pipelines and tankers project, including on Burnaby Mountain.

Top photo: Thousands of people marched in Burnaby, BC on March 10th to protect lands and waters from Kinder Morgan. (Photo: Ian MacKenzie via Flickr)