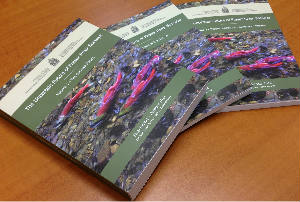 The final report of the Commission of Inquiry into the Decline of Sockeye Salmon in the Fraser River was released on October 31st, contrary to rumours that the document might not be made public.  The report, while not finding any single cause of declining Fraser River sockeye, made 75 recommendations about how Canada could better protect salmon in British Columbia.  Many of them stand in direct contrast to recent cuts to Fisheries and Oceans Canada (DFO) scientists and other staff and weakening of the Fisheries Act.

What is the Cohen Commission?

In 2009, Prime Minister Harper appointed Justice Bruce Cohen, a BC Supreme Court Justice, to look into the decline of Fraser River sockeye. This inquiry was prompted after only 1.4 out of the expected 10 million adult sockeye returned to their spawning grounds in the Fraser watershed, prompting a closure of the commercial sockeye fishery for the third year in a row.

Over the past three years, Commissioner Cohen carefully gathered and reviewed
evidence for his final report, which he submitted to Parliament on Monday.

The release of the report

On Wednesday I attended a press conference, on behalf of West Coast Environmental Law, where Cohen addressed a packed room full of media and concerned members of the public for the first time since the release of his thick, three-volume final report, dubbed: “The Uncertain Future of Fraser River Sockeye”. The report can be found on the Cohen Commission website.

At the conference, Cohen noted that although a single event or stressor to explain the decline in the Fraser salmon stock is appealing, he was unable to find a single “smoking gun” explanation for the decline in Fraser sockeye.

According to Cohen, “Fraser sockeye experience many stressors on their health and their habitat”, which collectively provide an explanation for the decline in what he calls a “strong sockeye fishery” that he has a “great respect and appreciation for.”

Cohen singled out climate change as an important factor in explaining the decline. “Warming water is the elephant in the room that we cannot ignore”, Cohen told the media, adding that temperatures in the Fraser watershed are five to six degrees Celsius higher than average, with 14 of the past 20 seasons being “among the warmest on record”.

Regarding the recent legislative amendments to the Fisheries Act, Cohen expressed concern.

Many experts have emphasized the importance of protecting fish habitat, promoting biodiversity and adopting ecosystem-based management practices.  However, the recent amendments to the Fisheries Act appear to be taking (the Department of Fisheries and Oceans) in a very different direction.

He pointed out that such “troubling” amendments focus on the fishery as a whole rather than fish habitat itself, and insisted that “…the [Fisheries Act’s] priority must be on the health of wild fish… you can’t have healthy fish unless you have healthy habitat”.

Speaking to the controversial decision to change the Fisheries Act, Cohen said warily that “only time will tell” how the changes to the federal statute will effect fish stocks in general, and the health of Fraser River sockeye in particular.

Overall, Cohen’s meticulous media address on Wednesday gave additional legitimacy to the issue of Fraser River sockeye conservation. Although Cohen told the media he “cannot quantify the likelihood of harm” from pathogens and diseases from salmon farms due to a lack of scientific certainty at this point, his profound concern and view that the aquaculture industry has the potential to introduce irreversibly harmful diseases which will impact the overall health of Fraser sockeye was enough to convey a strong message that salmon farms are bad for wild salmon in general, and Fraser sockeye in particular.

Volume three of Cohen's report contains 75 recommendations, addressing a wide range of issues and impacts on sockeye.  Several of these related to ensuring that Fisheries and Oceans Canada’s primary mandate is on protecting wild salmon, and that the agency have the resources and information to do so.  I have paraphrased some of the most noteworthy recommendations below.

*- This research should be undertaken immediately, until September 2020 to ensure a complete and comprehensive study of the above hypotheses.

Upon reflecting on Cohen’s 75 recommendations, it quickly became clear to me that the controversial risk fish farms pose to wild salmon is real and worthy of further investigation.

Controversy over fish farms played a major role in calls for the Cohen Inquiry, so it’s significant that the Report does suggest that there is a tension between wild Pacific salmon and the Atlantic salmon bred in BC’s fish farms.  Although more scientific research is needed to draw conclusions about a significant correlation between fish farms and the health of wild stocks, it is clear that Cohen believes a significant amount of discoverable evidence is out there, for he recommends in his report that certain precautionary measures be taken. Cohen: “mitigation measures should not be delayed in the absence of scientific certainty”.

In addition to dropping Fisheries and Oceans’ responsibility for fish farms, Cohen recommended that the Government:

He emphasized both in his report and at the press conference that, if the minister finds the effects of salmon farms in the Discovery Islands region (an area where nine salmon farms currently operate in the direct migration path of juvenile sockeye) to pose “more than a minimal risk” to Fraser sockeye anytime between now and September 2020 (the ending date for the recommended studies), that he prohibit them in our waters.

The seriousness of the issue is exemplified in the boldness of Cohen’s recommendation that fish farms be removed from sockeye migration routes, should they be found to pose serious harm to Fraser sockeye.

Other recommendations and my Conclusion

Of course, this just touches the surface of the 75 recommendations.  We may address some of the others in future Environmental Law Alerts. Generally speaking, Cohen found many serious concerns about DFO’s management of the Fraser sockeye, including many areas where further information is urgently needed.

This inquiry has revealed much insight on the decline of the Fraser sockeye.  However, we anxiously await the government’s response. Recent cuts to Fisheries and Oceans staff and amendments to the Fisheries Act suggest that the government is moving in the wrong direction. Will the Cohen report be enough to bring them to their senses?

See video of the fish farm portion of Commissioner Cohen's Press Conference, below: