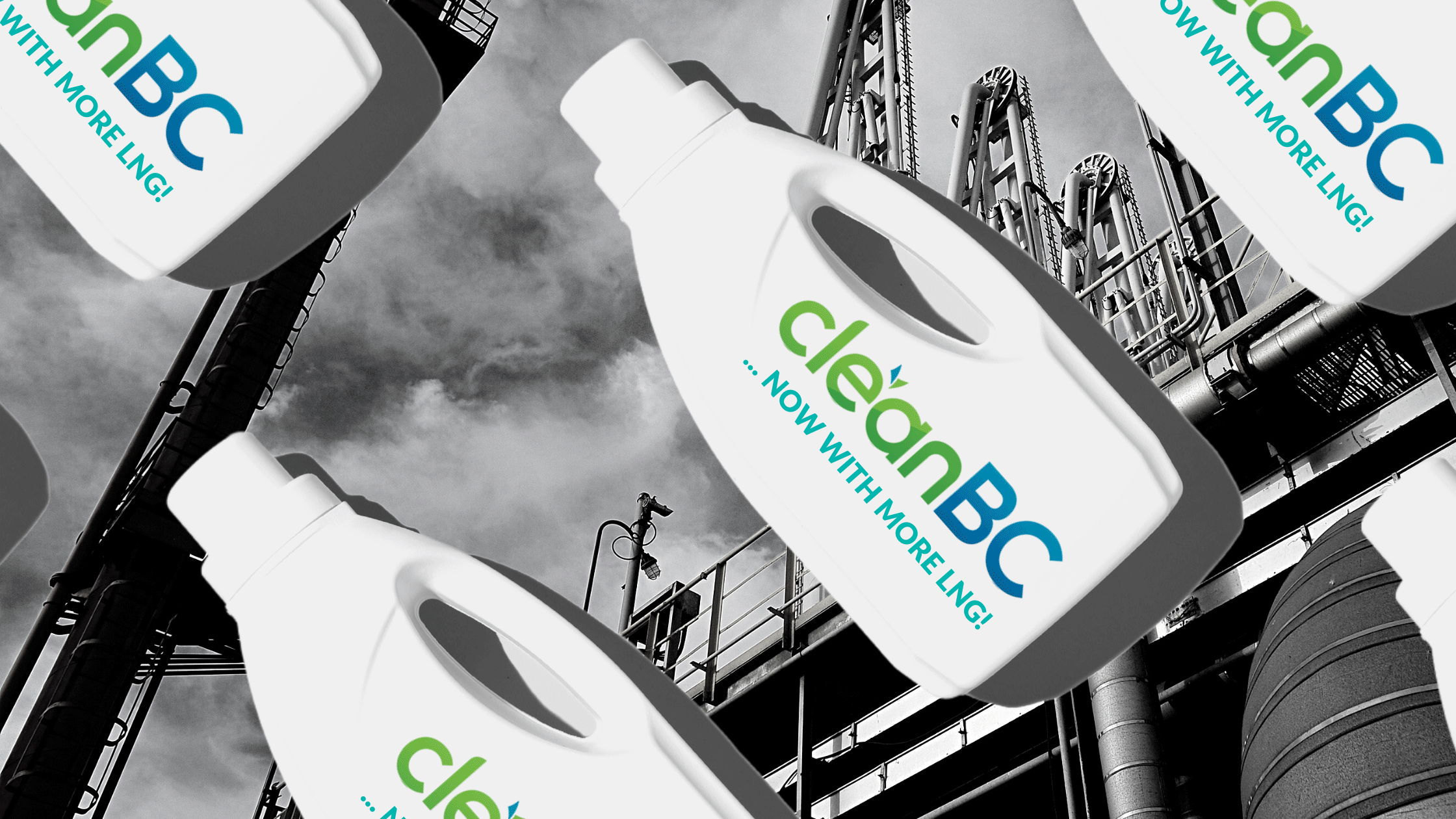 At the end of November, BC’s Minister of Environment issued its 2022 Climate Change Accountability Report, boasting in a press release about “progress made in key areas.” The BC media entirely failed to cover it – which is disappointing, because, as Minister Heyman pointed out in the press release, the report is intended to be “a cornerstone of our transparency and accountability on climate, as it provides a full accounting of government climate actions, spending and results.”

Had journalists taken a closer look at the Report, and looked behind the good news spin on the release, they would have found that the report reveals that BC will almost certainly miss its 2025 climate target, and may miss the 2030 target, as a direct result of LNG Canada.

While positive steps are being made, we need the media to ask government tough questions about whether the province is actually on track to meet its climate targets, and especially about the role of the oil and gas sector in making or (currently) breaking those targets.

Why the 2025 and 2030 climate targets, and the Climate Accountability Report, matter

The BC government has set and missed greenhouse gas (GHG) emissions targets for 2012 and 2016. When the BC NDP was elected in 2017 it repealed the 2020 target (33% reduction relative to 2007 levels), arguing (with some justification) that it was unachievable due to inaction by the previous government. To date, every target set by the BC government for reducing GHG emissions has been missed.

The recent Climate Change Accountability Report is the latest of these reports, and mostly paints a rosy picture. It is best practice to have these progress reports done by independent experts, who will be honest and upfront about any shortcomings on the government’s part – but BC’s legislation does not provide for independent oversight.

Nonetheless, on page 11 it is acknowledged that the province is not currently on track to achieve either the 2025 target or the 2030 target (although the government’s press release claims that it is “largely projected to meet its 2030 target”). This is the first time that a specific shortfall has been estimated for the 2025 target.

Here’s the table, with the narrow green strip showing the gap between the current climate plans and the targets.

There is no doubt that the gap to the 2030 target is smaller than it was before the government’s CleanBC “Roadmap to 2030” climate plan was announced – and that is good news. This table, however, is misleading in at least a couple of ways.

First, it hides the fact the province’s climate projections show that we are actually on track to achieve both the 2025 and 2030 targets (well done us!) but that one event in 2025 will increase the province’s GHG emissions by an estimated 3.45 to 4 Megatonnes (Mt), blowing both targets out of the water. That event? The opening of LNG Canada’s Phase I liquefied natural gas facility.

Second, in reality the gap for both targets – but especially the 2030 target – is much larger than the graph indicates. Some of the emissions reductions attributed to the CleanBC plan are currently imaginary. CleanBC proposes to come up with actual plans or policies in the future to achieve these reductions, but as yet there is no actual plan or policy. Others are still in the design phase. So, some of the reductions associated with CleanBC are as much “Additional Actions” as the additional actions indicated in green.

And third, the graph implies that there is still time to roll out additional actions in 2023-2025 to close the 15% gap to the 2025 target. This is wishful thinking. The only way to close the 2025 gap in time is to not introduce new sources of emissions like LNG Canada’s Phase I.

When Premier John Horgan’s government gave the go-ahead to LNG Canada, offering massive subsidies, they insisted that the project would fit within the province’s climate goals. In fairness, the 2025 target was not yet established at that time, but no explanation was ever offered to show how the project would fit within the 2030, 2040 or 2050 targets.

LNG Canada is the largest of several natural gas shipping projects that have either been approved or are under consideration by the BC government. But Phase I of this two-phase project is the only project that has an investor decision to go ahead, and it’s the only LNG project that the BC government currently includes in its climate projections. According to the government’s estimates, LNG Canada Phase I is scheduled to add 3.45 Mt of carbon dioxide to BC’s greenhouse gas emissions when it comes online in 2025.

This dramatic increase in 2025 doesn’t show up in the government’s Table, because the government doesn’t model year-by-year emissions (it only models for certain key years, one of which is 2025). As a result, the projection shows a clean line between 2021 and 2025, rendering invisible the sharp increase in emissions expected in 2025. In actual fact, the emissions pathway expected looks something like this: 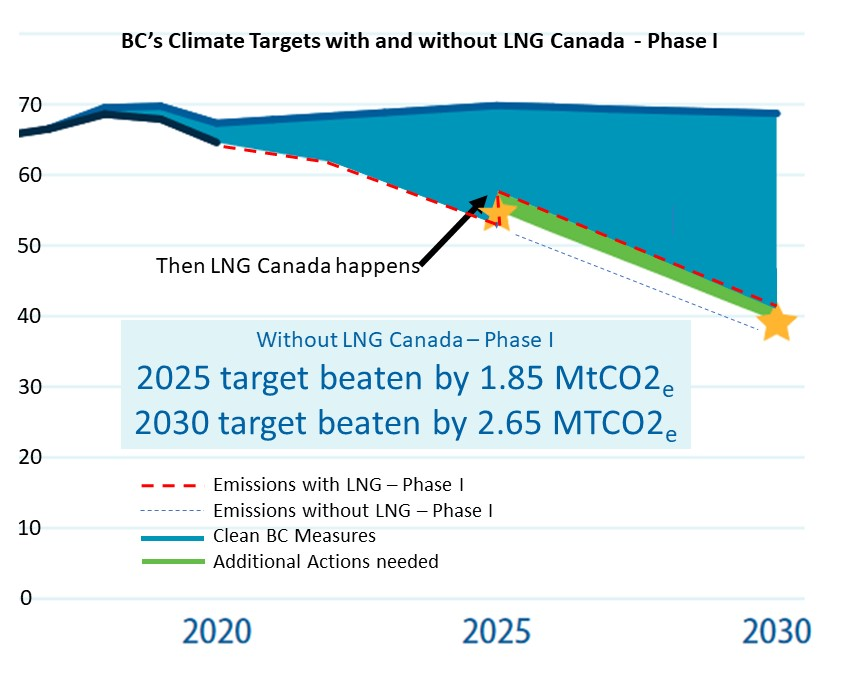 BC should be on track to beat our 2025 and 2030 targets. Instead, we’re scheduled to miss both as a direct result of LNG Canada (although there is still time to catch up to the 2030 target).

This last category notably includes the plan to develop a plan with the oil and gas industry to ensure that it meets its sectoral target (expected by 2023). As we said in 2021 when the Roadmap to 2030 was released:

The Roadmap does not show in any meaningful way how BC will achieve the oil and gas target, and an explanation has been promised for at least three years.

Obviously not all emissions attributable to the CleanBC/Roadmap to 2030 measures are equally certain, and some are at this stage imaginary – still only a promise to have a plan. But you wouldn’t know that from the government’s Accountability Report.

To provide the accountability that this Report, and the Climate Change Accountability Act, should provide, the government needs to be more transparent in explaining where it is at in terms of real emissions reductions.

The Report seems to suggest that additional actions could allow us to meet the 2025 target. With 2022 almost over, new actions will have to be developed and implemented in 2023 and 2024 to have any hope of influencing the 2025 target. Since there is a 15% gap to the 2025 target, this is an incredibly heavy lift. Any new measures should have been identified in the Roadmap to 2030, or failing that in this Report itself, and should be well on the road to implementation.

It remains quite possible that the government could develop and implement additional measures between now and 2030, allowing it to achieve that target notwithstanding LNG Canada-Phase I (assuming none of the other approved LNG facilities are brought online by then). But if Phase I goes ahead, then BC will miss yet another climate target in 2025.

BC claims to be a climate leader but has never met a climate target, despite BC’s current legislated targets being weak compared with what scientists say developed countries must do to reduce emissions.

But more fundamentally, the Climate Accountability Report continues a tradition of expecting ordinary British Columbians to meet the climate targets while using sleight of hand to hide the fact that certain favoured industries are moving us in the wrong direction. Just this week the new Premier published a new mandate letter for the Minister of Environment and Climate Change instructing him to “Ensure new industries fit within the CleanBC Plan” – the same vague wording that was used to justify LNG Canada’s new emissions.

Addressing the climate emergency requires all hands on deck. Other sectors and individual British Columbians have been doing their part to reduce greenhouse gas emissions, and it’s unfair to expect them make up the slack for those that haven’t. The myth that some industries are too lucrative to be required to follow the rules undermines public confidence in our climate targets, while perpetuating the fossil fuel economy that has caused the climate crisis in the first place.

BC’s media should be covering the fact that the province will not meet its 2025 target, and that one industrial facility – LNG Canada – is solely responsible for that fact. And the BC government needs to come clean about the failure of its promise to ensure that LNG-Canada fits within its climate targets.