Challenging U.S. coal to China from Texada Island, BC 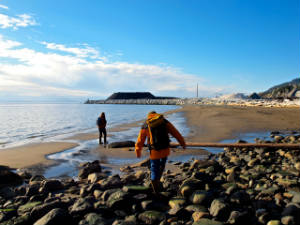 Should BC be used to trans-ship American coal to China? Who gets to decide? And what does that mean for our environment?

These issues and others will be considered in a legal challenge brought by Voters Taking Action on Climate Change (VTACC), with support from our Environmental Dispute Resolution Fund, to a government decision approving the ten- to twenty-fold dramatic expansion of coal shipping from Texada Island.  Under an amendment to their Mines Act approval, Texada Quarrying Ltd., which is owned by Lafarge Canada, plans to store up to 800,000 tonnes of coal on site (up from a maximum of 400,000 tonnes) each year from a facility located at its limestone quarry on Texada Island, which will enable as much as 4 million metric tonnes per year of imported U.S. coal to pass through the expanded Texada facility – effectively more than 10 times the amount of coal currently handled at the facility.

Most of this coal will come from Wyoming and Montana, shipped through the controversial proposed Fraser Surrey Docks Coal Port, and could, in the long term, increase to as much as 8 million metric tonnes per year.  What happens on Texada will have an impact throughout the region – and globally.

The Environmental Management Act (EMA) and its regulations currently requires that any person who is engaged in “product storage” of “bulk solids” have a permit.*  “Production storage – bulk solids” is defined as including “… activities and operations for the storage or handling of… coal …”

So when VTACC and residents from Texada and Lasqueti Islands approached us last year, we told them that an EMA permit is required – and, indeed, should have been required even for the smaller coal pile currently operated by Lafarge Canada. Initially, however, we were not certain whether Lafarge might have such an approval, or be seeking one. So I wrote, in August 2013, to the Ministry of Environment, as well as Energy and Mines, to ask.

I also clarified why, in my view, a Mines Act Permit was not sufficient (or even appropriate) to authorize this coal port facility.
In response, the Ministry of Energy and Mines informed us that the Ministry of Environment would be considering an application for an EMA permit:

This application has been referred to the Ministry of Environment (MOE) and I have been advised by MOE that Lafarge will require a waste discharge permit under the Environmental Management Act and that it will be a new permit. … I also understand the required process under the Environmental Management Act for this authorization has not started as of this date. Once initiated MOE will process the application in accordance with their normal policy, and in accordance with the provisions of the applicable legislation.

However, in October of last year, the Ministry of Environment apparently reversed this decision, and the project has proceeded on the assumption that only a Mines Act approval will be required.  The Mines Act approval was quietly issued in March of this year, but that wasn’t publicly revealed until almost a month later.

Donald Gordon of VTACC has explained what is at stake in the legal challenge:

We see no other option than to take the government to court. The Province has ignored evidence of ongoing coal contamination, rejected the pleas of public health officials, dismissed citizens’ and First Nations’ call for an independent environmental assessment of this project, and refused to apply its own pollution prevention laws under the Environmental Management Act. We cannot sit back and watch while this massive coal export facility is illegally authorized without adequate review.

VTACC’s legal challenge, filed June 2nd, is being handled by experienced environmental lawyer, Tim Howard – formerly of Mandell Pinder and Ecojustice.  In addition to the argument that an EMA approval is required for this project, Howard is also arguing that the Ministry of Energy and Mines acted:

West Coast is proud to support VTACC in its legal challenge, and we will be following this case with great interest.

* - If a Code of Practice were developed for Bulk Solid Storage, then compliance with that Code, rather than a permit, would be required. However, no such Code has been developed at present.