Canadians stand up for fish 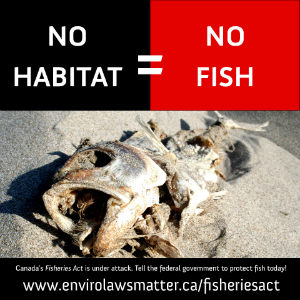 A great many Canadians, from many different backgrounds, have been standing up for fish – saying no to changes to the law that would gut legal protection for fish habitat.  And, thanks to public opposition, the government has not brought its weakened Fisheries Act into law, as yet.  We need to keep the pressure up.  Fortunately, some of the opposition to the gutted fish habitat protection is coming from places you (and the government) may not expect.

Let’s start by thanking everyone who participated in our No Habitat=No Fish campaign.  Thousands of Canadians joined us in writing to Canada’s government to recommit to strong protection of fish habitat and to abandon Fisheries Act amendments (which were hidden in the 2012 Omnibus budget bill, but have not yet been brought into force) that would gut the legal protection for fish habitat.

Thanks to your voices and others the amendments have not yet been brought into law – although we still need to keep the pressure on the government.  If you have not yet written a letter, please do.  If you have, invite your friends to do so.

When the federal government announced changes to the Fisheries Act in April 2012, the Minister of Fisheries and Oceans did so alongside representatives of two prominent wildlife organizations, noting that these organizations had previously “raised concerns about the effectiveness of our current policies” and asserting that therefore “we all agree that these changes are a good thing.”

Shortly thereafter, the government established a Hunting and Angling Advisory Panel to advise it on implementation of the Fisheries Act amendments, made up of Canada’s prominent wildlife conservation organizations, but which did not include a single First Nation representative – who one might think might have some useful perspectives about hunting and fishing – or any environmental organization.

But, in fact, organizations that represent the conservation interests of hunters and fishers have been among the most prominent voices expressing concern about weakening legal protection for fish habitat. Much of this has been behind the scenes or through the Advisory Panel.

However, a number of wildlife organizations have also gone public with their push back on the planned amendments to fish habitat provisions.  The BC Wildlife Federation opposed the amendments when they were first publicly proposed, and they continue to make their concerns clear.  In a recent letter to the Minister of Fisheries and Oceans, President Bill Bosch writes:

The fact is that some temporary alterations to fish habitat, depending on the location, timing and duration, can have profound impacts on fish and the productivity and sustainability of fisheries. …

Meanwhile, on the East Coast, the Atlantic Salmon Federation (ASF), also a member of the Advisory Panel, shared our No Habitat=No Fish campaign on its website, prefacing it with a reference to their own ongoing concerns about the Fisheries Act amendments:

ASF has been concerned about the changes to the Fisheries Act since Bill C-38 was first announced. ASF's Bill Taylor addressed the issue before the Parliamentary Committee on Fisheries and Oceans in November 2012. The links directly below this go to his testimony.

In addition, a column on Bill Taylor's comments was written for Rabble. Read column.

And twelve conservation organizations from across the country (including Ducks Unlimited and the Ontario Federation of Anglers and Hunters, who were present at the original DFO announcement in April 2012, and 9 other members of the government’s advisory committee) in April 2013 prepared a joint statement expressing concern about whether the proposed amendments could be implemented in a way that protected fish. Although the joint statement does touch on some changes that the groups view as positive, the summary of the concerns expressed include:

It’s fair to say that these hunting and fishing organizations have grave concerns about the impact of the Fisheries Act amendments on fish habitat.

We were pleased to have the Honourable John Fraser, former Conservative Fisheries Minister, add his voice to our No Habitat = No Fish campaign and the thousands of Canadians who were speaking out.  In an interview on June 24th on CBC’s Early Edition (at about 32 min in), Fraser explained:

The key section of the old Fisheries Act … just said no person shall carry on any work or undertaking that results in the harmful alteration, disruption or destruction of fish habitat.  Now, that is the strongest piece of conservation legislation of any legislation in the whole of Canada and it’s been there for decades.  And what it has been changed to is that you can’t do these things unless it results in serious harm to fish that are part of, listen to this, a commercial, recreational or aboriginal fishery.  And serious harm as been defined: death of fish, or any permanent alteration or destruction of fish habitat.  Well, this raises a bunch of questions. What’s permanent alteration?  Is it one year of cutting off of a salmon run?  Is it only death of fish?  What about maiming, deforming and stunting the growth of fish as a consequence of pollutants in the water? …

Why did they do it?  …. All I can tell you this, as a life-long conservative, and a conservationist, and by the way, I don’t believe you can be a real conservative if you’re not a conservationist, but I can tell you this: that in my view, this was one of the dumbest political stunts I have ever seen.… There’s a real fundamental here that some of these people who were drifting around from wherever the came from in Ottawa and talked the government into this didn’t know anything about.  You can’t have fish without habitat.  It’s fundamental.  That was recognized in the old Act, and these people don’t recognize.  All we’re saying is: don’t bring these provisions in.

This is not, of course, the first time that Fraser has criticized these changes – in May 2012, he joined former Conservative and Liberal Fisheries Ministers Tom Siddon, Herb Dhaliwal and David Anderson in writing to the Prime Minister to oppose the proposed changes.

According to Fraser, they never received a reply.

In addition to the wildlife federations, and former fisheries ministers, the range of informed voices criticizing the proposed fisheries act amendments have been astounding, and include:

C-38 amendments that would gut legal protections for fish strike at the heart of the relationship between First Nations and the federal government, and should never be brought into force…. Last year’s so-called budget bills embody a vision of Canada that is unacceptable to First Nations and non-Aboriginal Canadians alike. The Idle No More Movement has been a powerful reminder of the consequences of this.

Why were these changes made?

The federal government would have us believe that amendments to the Fisheries Act were needed to address concerns of cottage owners, farmers and local governments because the original Fisheries Act forces governments to protect “ditches” the same way as they do lakes and rivers.

[U]nder the current system, drainage ditches, man made reservoirs and irrigation channels are subject to the same rules and guidelines as rivers, lakes, and oceans that support fish and local fisheries.

Sound bites like this one can sound reasonable, even when they are simply wrong.  The original Fisheries Act does not indiscriminately “treat all bodies of water in the same way” – it protects all fish habitat (although even then, the government has considerable discretion in terms of how it protects fish habitat and when it authorizes its destruction).  If a lake is not fish habitat, then it does not receive any legal protection under the Fisheries Act.  But if a body of water has fish in it, or provides food for fish, then it does – even if someone believes it is “just” a ditch.  To announce that certain bodies of water are not fish habitat simply because that’s politically convenient is unscientific and does not protect fish.

Moreover, the government has offered no compelling evidence that practical concerns about implementation of the Fisheries Act could not be addressed in appropriate circumstances under the existing Act (given the enormous discretion the Fisheries Act already provides to authorize alteration of fish habitat).

And the fact remains that the Fisheries Act amendments will fail to protect fish even in water that the government agrees is fish habitat.  Unlike the current Act, the new law prohibiting harm to fish habitat would only make “serious harm” illegal – and, as we’ve written previously, there are so many holes in that definition that you could drive a dump truck through it.

The serious harm provision is without a doubt the most significant change to the Fisheries Act under Bill C-38, and yet government statements about the changes rarely mention it – instead claiming that the changes will allow government to focus on fish species or fish waters that deserve protection.  So let us be clear – the “serious harm” provisions will reduce legal protection for all fish and all fish waters – even those that everyone agrees deserve legal protection.  The habitat of many other fish species may not have even this level of protection.

Although there is little evidence that changes were required to address practical concerns about implementation of the law, there is evidence that the Fisheries Act changes were lobbied for by resource industries, particularly the oil and gas sector, in order to pave the way for resource development. As we’ve reported previously, on December 12, 2011, just months before Bill C-38 was introduced, several oil and gas industry associations wrote to the government specifically requesting that the Fisheries Act (among other Acts) be overhauled.  Similarly, in June, 2012, Keith Ashfield, then Fisheries Minister, explained that the Fisheries Act amendments would offer increased flexibility in authorizing pollution:

So thanks again to those who have spoken up.  But I’m going to ask you to speak up even louder, and often.  Talk to your friends, family and neighbours.  Meet with your MP.  Write letters to the editor and more letters to the government.  We need the government to know that gutting protection for fish is not acceptable.  Because No Habitat = No Fish.