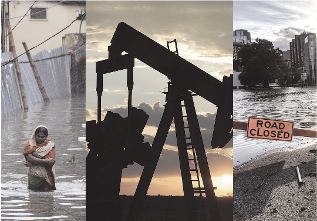 Canada is not a super-power.  We’re geographically large, but small in terms of population.  And when it comes to climate change we’re used to hearing politicians say that we’re “only” responsible for about 2% of the world’s greenhouse gas emissions – so what we do to stop our contribution to climate change doesn’t matter.

West Coast’s climate work focuses on the reality that we can’t keep pretending that greenhouse gas emissions are not a deadly serious problem. The world (including Canada) is experiencing disastrous flooding, sea-level rise, extreme storms, droughts and heat waves, increased frequency and intensity of forest fires,  the spread of pest species and other climate related impacts here and now. Because of the scale of the damages, even smaller contributions are responsible for devastating results.

So, as I attend the first day of a climate conference in Bonn, part of the negotiations leading up to a much anticipated global climate agreement to be finalized in Paris this fall, let me suggest that Canada’s greenhouse gas emissions do matter globally: greenhouse gas emissions from Canada are killing people and costing the global economy billions. It’s the failure of developed countries, including Canada, to acknowledge and deal with the harm that GHG emissions are causing globally that has developing countries talking about north-south reparations for climate damages.

The Climate Vulnerability Forum, an alliance of 20 countries that are especially vulnerable to climate change, has teamed up with DARA, an international humanitarian organization funded by UNICEF, to bring us the Climate Vulnerability Monitor, one of the most comprehensive attempts to quantify the deaths and economic damage that climate change is already causing around the world.  Their verdict?

[C]limate change causes 400,000 deaths on average each year today, mainly due to hunger and communicable diseases that affect above all children in developing countries. Our present carbon-intensive energy system and related activities cause an estimated 4.5 million deaths each year linked to air pollution, hazardous occupations and cancer.

Climate change caused economic losses estimated close to 1% of global GDP for the year 2010, or 700 billion dollars (2010 PPP). The carbon-intensive economy cost the world another 0.7% of GDP in that year, independent of any climate change losses. Together, carbon economy- and climate change-related losses amounted to over 1.2 trillion dollars in 2010.

These are staggering figures.  Canada’s greenhouse gas emissions from the industrial revolution to present are about 2.2% of global emissions, and mix with the emissions from other countries, causing climate damages in communities around the world. If we focus on climate change impacts (400,000 deaths and US$700 Billion)*, Canada’s GHG emissions can be said to be responsible for 8,800 deaths and $15.4 Billion in damages each year.

Here in Canada, the damages have been estimated to be Cdn$5 Billion/year by 2020, so our 2.2% contribution to that is $110 million/year. This analysis was completed by our National Roundtable on Environment and Economy (NRTEE), prior to being disbanded by the current federal government in 2012. We don’t have estimates about climate change related deaths in Canada, but suffice it to say that the most vulnerable groups are the young, the frail and the elderly.

So how do we compare?

Of course, it’s true that Canada is not causing this problem by ourselves.  How does our 2.2% contribution compare to other countries?

Well, the 10 countries (including Canada) that are most responsible for climate change together have caused over 70% of historic greenhouse gas emissions. Using the above approach, here’s how many climate-related deaths, and how many billions of dollars of climate damages, each is responsible for:

So, yes, there are a small number of countries (8 to be precise) that are responsible for more climate-related death and destruction than Canada, but since each of them has a population far above Canada’s, we probably can’t get too indignant about that. And clearly Canada’s emissions are far from insignificant.

When you’re in a hole, stop digging!

The advice that’s given to people who have a problem they created for themselves is “if you find yourself in a hole, stop digging.”

We need to stop causing further harm, and we need a discussion about who should pay for the harm that we can no longer avoid, and how. As a country, we need to implement and enforce a price on carbon that will shift us away from our fossil fuel dependence, and our role in causing harm to other people and substantial economic losses.

We can’t afford not to.

* - The deaths and financial losses from the “carbon-intensive economy” – losses from the direct impacts of fossil fuel use such as air pollution, water pollution and other such damages – are, of course, important.  However, it’s not possible to equate Canada’s 2.2% historic emissions with 2.2% of the total responsibility for damages from the “carbon-intensive economy.”  This is because the damages from fossil fuel use depend on a variety of factors not reflected in the 2.2% figure, such as types of fossil fuel used, technologies used, where the emissions took place, etc.  The report does, however, indicate that Canada suffers $18.6 Billion of damage annually due to the fossil fuel economy.