Canada’s climate law fills the glass part way, but we need to top it up | West Coast Environmental Law

News & Events » Environmental Law Alert Blog » Canada’s climate law fills the glass part way, but we need to top it up
Back to top

Canada’s climate law fills the glass part way, but we need to top it up 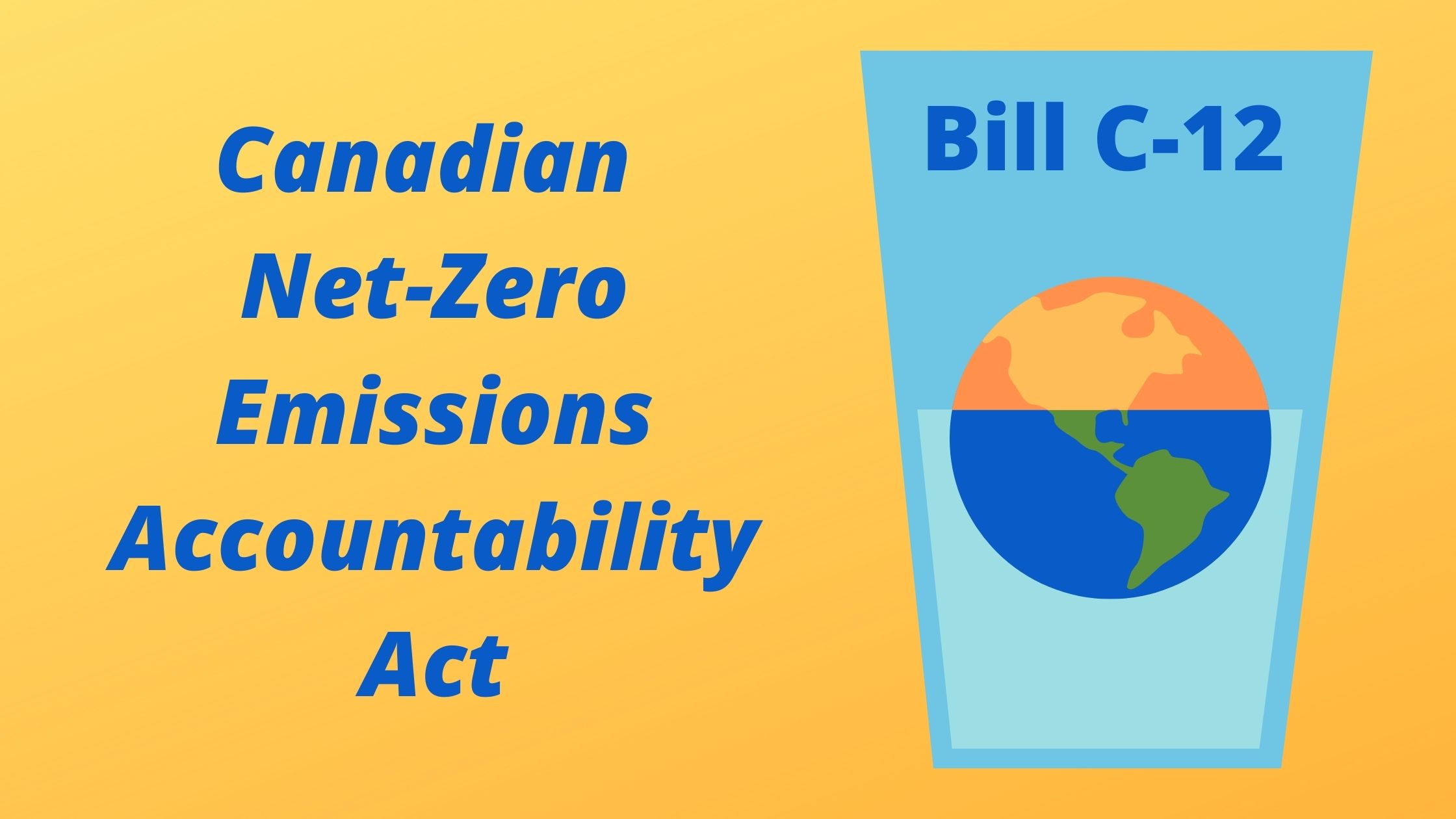 In many ways Bill C-12, the Canadian Net-Zero Emissions Accountability Act, is the culmination of years of work for West Coast Environmental Law. We have been pressing for climate accountability legislation since our 2015 report A Carbon Budget for Canada set out our vision in detail. This is the first time that a sitting Canadian government has introduced a law setting out a process to achieve its climate goals.

And that in itself is cause for celebration.

That said, the bill falls short of the five pillars of a leading-edge climate accountability act we identified with environmental groups across the country, calling into question whether Bill C-12 will fully achieve its promise.

In a nutshell, the Canadian bill doesn’t kick into high gear until 2030 and is less science-based and less transparent than similar laws in the UK and New Zealand.

The good news is there are some relatively easy fixes that could get Bill C-12 working and give us a climate law that we can all be proud of.

We’ve seen too many examples of governments setting climate targets that are decades off and then doing nothing to achieve them. As long as the target seems distant, there’s no pressure to act on it, and when the target gets closer, the government of the day can blame previous governments for the fact that the target won’t be met.

One of the brilliant features of the UK Climate Change Act 2008 is that it requires government to set climate targets that are not just decades in the future, but also for the next five, ten and fifteen years together. It also makes the government set targets based on the science-based recommendations of an expert committee, or explain why if they set a different target. The UK’s first “carbon budget” began in 2008 (covering the period from 2008 to 2012), right after its legislation was enacted.

This approach means that the government has clear short-term objectives while also needing to plan for mid-term goals, both of which are based on science.

So it was pretty disappointing that Bill C-12:

Let me focus on the first point for a moment. The first target and plan set under the Act is for 2030 – a full decade in the future. Given the urgency of the climate crisis, we can’t afford to wait that long to set targets, or to leave setting them to politicians alone.

As the government sets a 2030 target and a credible plan achieve it (as Bill C-12 requires, just 6 months after it is enacted), there is no reason not to identify where the country should be by 2025 at the same time. This would then provide an incentive for governments to front-load the plan for 2030, ensuring that real results will be seen by 2025.

As Catherine Abreu of the Climate Action Network has said, this bill should create accountability for “*current* as well as future governments … so that Canada never breaks another climate promise.”

The COVID-19 pandemic has shown us what science-driven decision-making can look like. Politicians may still ignore the advice of medical health professionals, but they do so at their political peril.

Climate laws in other countries create expert committees that play a lead role in setting climate goals and critiquing government efforts to meet those goals. In many cases, the government has to either follow the recommendations of the experts, or publicly explain why they are not. As a result, in the UK, as the Grantham Research Institute says:

The Committee on Climate Change (CCC) has had a strong influence on UK climate policy. Its analysis is used and trusted by stakeholders on all sides of the debate, and its statutory advice [on setting carbon budgets] has generally been followed.

Bill C-12 creates an “advisory body,” which should serve this role. Unfortunately, the role of this expert body is weaker than we have seen in other countries, because:

While we are certainly pleased to see the expert body in Bill C-12, it badly needs an upgrade. Other than a general duty to provide advice to the Minister, the main product for the advisory body under the bill is an annual report “with respect to its advice and activities” to the Minister. The Minister is required to “publicly respond” to this advice, but there are no explicit requirements to make the report itself publicly available (although the government says that it will do so) or to table the report and response in Parliament.

As noted above, a strong, science-based role for experts in setting the targets is critical to ensuring that Canada’s ambition is not watered down by political considerations. To that end, we recommend Bill C-12 ensure that the advisory body is comprised of independent experts and ensure that targets and plans are based on those experts’ recommendations rather than politics.

Where is the accountability? More teeth needed

Effective climate accountability laws help the public and decision-makers understand what needs to be done to fight climate change, and whether action is actually happening. They impose clear duties on government to put science first, and hold politicians to account.

Bill C-12 does contain some key features of accountability, but relies far too much on politicians doing the right thing and the public paying a lot of attention. To be truly accountable, the bill must create clear obligations for politicians to follow scientific advice and deliver effective plans, but also make it clear what happens when they fail to do so. For example:

One area of accountability that Bill C-12 has that does not appear in the UK or New Zealand laws is the requirement for the Minister of Finance to publicly release an annual report on the steps that the government is taking to address “financial risks and opportunities related to climate change.” It is not totally clear how this requirement will be interpreted (which is itself disturbing), but guidance should be taken from the Taskforce on Climate-related Financial Disclosures, which has identified best practices for institutions to report on how climate change affects their financial planning and assumptions. If this requirement is implemented in a rigorous way, it may be a helpful addition to Canada’s climate planning requirements.

Canada, as a confederation of provinces and territories, faces some unique challenges in achieving a national climate target. The choices that provincial governments make can have a huge impact on our national progress. Indeed, currently two provinces (Alberta and Saskatchewan) are responsible for almost half of Canada’s emissions. At the same time, Canada arguably has significant constitutional authority (if not political capital) to play a strong backstop role in ensuring that we do our fair share to reduce national emissions if the provinces fall short.

We’re not going to achieve our greenhouse gas reduction targets without some tough conversations about how each part of the country will do its fair share, and about what each province’s share of the country’s “carbon budget” is going to be. When will each province start decreasing its emissions? Should provinces with a historically larger share keep that advantage in the short-term, or decrease their emissions faster to catch up?

These are hugely contentious questions, and it’s probably not surprising that Bill C-12 seeks to duck them almost entirely. And yet, Canada won’t be able to meet its climate goals without having a science-based, transparent discussion about what each province needs to do. A failure to address the respective roles of the federal government and provinces undermines accountability – not just for the provinces, but for the federal government as well.

For accountability to work, everyone needs to be clear about who is responsible. The federal government doesn’t need to do everything that’s required to achieve climate goals, but for C-12 to work, the federal Minister of Environment and Climate Change must be accountable for a plan that shows how all the provincial and federal efforts will collectively achieve the national goal. The approach does not need to be top-down, but it does need, at a minimum, to require the federal government to ensure that a conversation happens about how Canada as a whole will achieve those targets.

Ideally, Bill C-12 would offer answers to the important questions around the federal and provincial roles, and who is ultimately accountable for achieving Canada’s climate targets.

Bill C-12 includes at least a piece of many of the core elements of climate accountability laws around the world, but it falls short on details and … ACCOUNTABILITY. The good news is that because so many fundamental pieces are in the bill, fixing these problems is simply a matter of strengthening what is already there.

Bill C-12 is likely to be referred to the House of Commons Environment Committee in the new year. Now is the time for our elected representatives to hear about the importance of strong climate action and what is needed to strengthen Bill C-12. Stay tuned for our more detailed recommendations on what is needed to build a Canadian Net-Zero Emissions Accountability Act that we can be proud of.

For more detail on recommendations for strengthening Bill C-12 from West Coast and other Canadian environmental organizations, see this brief.

* Bill C-21 does give a watchdog role to the Commissioner for Environment and Sustainable Development, requiring the Commissioner to report at least every five years on the government’s implementation of climate change mitigation measures, including measures to achieve the current target. As worded the focus of this report is on implementation efforts, not on the adequacy of the plan.