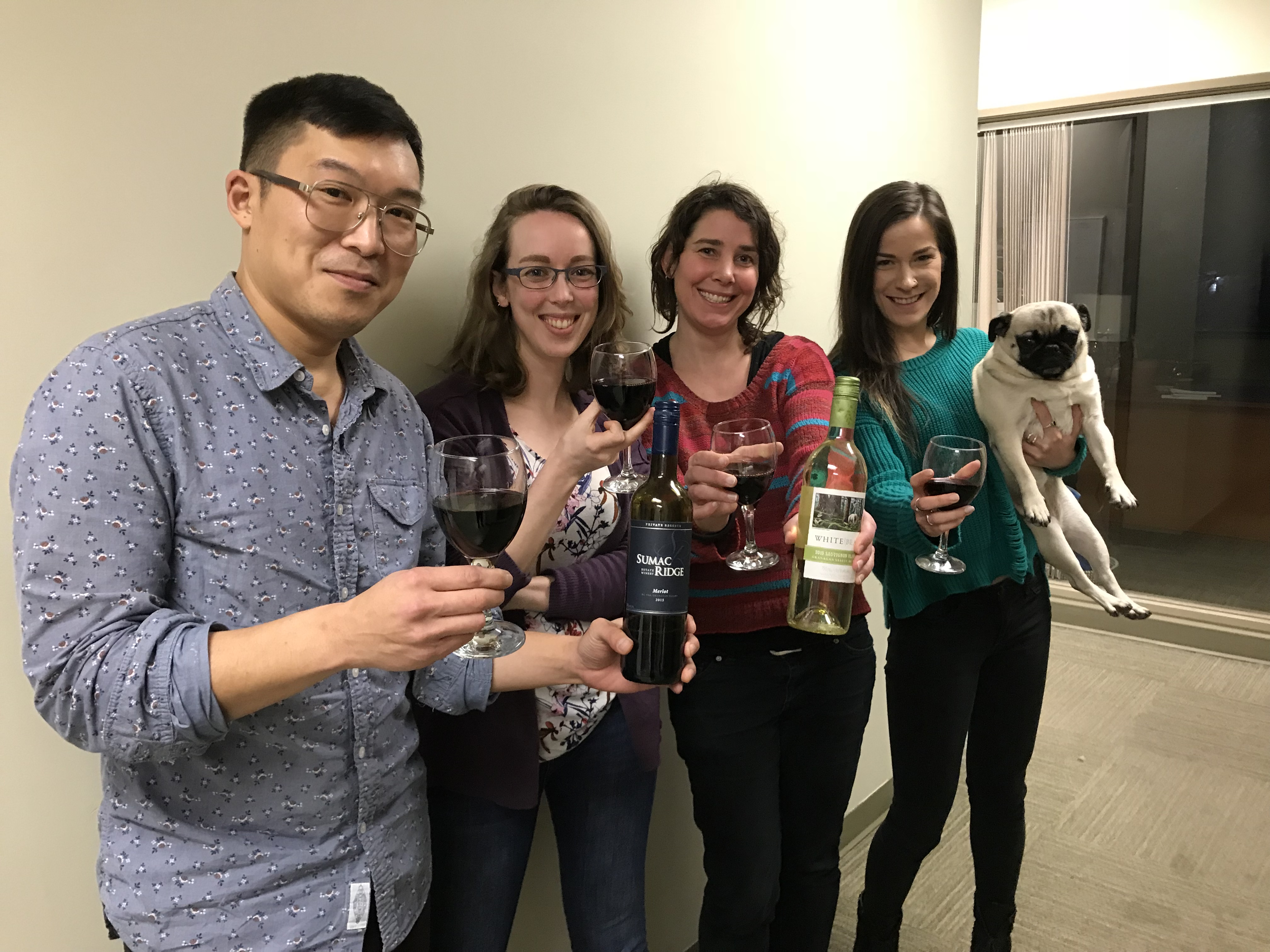 I never imagined that I would write three consecutive blogs about jurisdiction. But then again, I never imagined that drinking BC wine would become a way to oppose the Kinder Morgan pipeline. And that is just one part of what’s happened since my last blog post just a few weeks ago.

The last two posts reviewed the NEB’s process and decisions regarding local (municipal and provincial) laws and how they apply to Trans Mountain. To recap: under Canada’s cooperative federation, local laws are presumed to be valid and coexist unless a court determines there is a clear frustration of federal purpose, operational conflict or impairment of a federally approved project like the Kinder Morgan Trans Mountain pipeline and tanker project.

The continued but under-recognized existence of Indigenous jurisdiction adds further uncertainty to the federal approval of Trans Mountain, which (in case you forgot), is still subject to 15 legal challenges.

(Side note: check out this story and this follow-up in which Trudeau confirms that the decision on Kinder Morgan was made before Indigenous consultation was completed, which was one of the issues raised in the Federal Court of Appeal case)

So, how did we get here?

On January 30, 2018, the government of BC announced that it intended to use regulations under the BC Environmental Management Act to hit the pause button on increased shipments of bitumen in BC while an independent scientific advisory panel determines if and how heavy oils like diluted bitumen can be safely transported and cleaned up if spilled. This prompted Alberta premier Rachel Notley to blow a gasket – immediately calling BC’s plan illegal and unconstitutional.

Not long afterwards, Alberta announced a ban on BC wine, sparking an onslaught of stories, memes and comments online. Here is a great overview of what Alberta’s wine boycott is all about.

Well if it’s to protect the climate, science and Indigenous rights then I’ll take one for the team. :wink: Let the #WaroftheRosés begin!#cdnpoli #bcpoli #bcwine #stopkm #pinotnotpipelines pic.twitter.com/Q8VbzO1qgy

The problem for Premier Notley? There is nothing unconstitutional or illegal about a government issuing a press release about its intentions to study or regulate something. Several law professors weighed in, agreeing that nothing BC has done to this point is either illegal or unconstitutional. And as law professor Jason Maclean notes, the jurisdictional divide is as clear as bitumen.

To disallow any provincial regulation over the project because it engages a federal undertaking would significantly limit the Province's ability to protect social, cultural and economic interests in its lands and waters.

Nevertheless, Premier Notley called on Prime Minister Justin Trudeau to do more to impose its federal powers to get the pipeline built – despite the valid concerns of local governments.

As we have stated before, regardless of your views on this particular pipeline, this situation should be very concerning to anyone who rejects the idea that provincial, local or First Nations governments should be railroaded by a US corporation just because it has the go-ahead from Ottawa.

This sentiment was echoed by the Alberta-based, decidedly pro-pipeline national columnist, Lorne Gunter when he wrote:

Do we really want Ottawa to establish a heavy-handed precedent that it might choose to use against us in the future?

For instance, the National Energy Program — as clear a heavy-handed federal action as any — was an example of Ottawa invoking the “national interest” to ride roughshod over powers given by the constitution exclusively to the provinces.

National politics columnist Chantal Hebert concluded that there was not much Trudeau could do at this point:

…for all of the inches upon inches of virtual column ink expended on calling for so-called federal leadership, Trudeau can hardly take a province to court for usurping Ottawa’s constitutional powers over what remains a statement of intent.

Why study the behaviour of diluted bitumen now?

Since the BC government’s announcement, many have been asking why now is the time to study the behaviour of diluted bitumen (dilbit). Why wasn’t this done before the Trans Mountain project was approved?

Like an onion, this question has many layers. And the more you peel away, the more it makes you want to cry.

Scientists agree that there remain a great many questions about the behaviour of diluted bitumen, and that a better understanding of this toxic substance is essential before we know whether and if it can be cleaned up safely, and thus how best to regulate it.

A 2015 Royal Society of Canada report concluded that we know surprisingly little of what is necessary to safely transport these materials, and to mitigate the damage from the inevitable spills. The report set out seven high-priority research needs:

The NEB would have considered the best evidence about diluted bitumen before making its recommendation to approve Trans Mountain, right? Wrong.

The NEB did not consider the findings of the Royal Society report because the deadlines for filing evidence on the Kinder Morgan review had passed by the time it was released, and the NEB actually refused to consider a more recent and comprehensive report from the National Academy of Science in its evidence in order to stay within its legislated timelines.

In the end, the NEB’s final report noted Kinder Morgan’s support of the Royal Society study, and recommended that the results of the research should “continue to inform the potential fate and behavior of spilled oils and assist companies and spill response agencies in spill response planning.” (p.137). One of the conditions of Trans Mountain’s approval (Condition 124) requires Kinder Morgan to demonstrate its ability to respond to and recover from spills in coordination with local governments like the Province of BC prior to commencing operations. In doing so, it must incorporate the results of research initiatives regarding dilbit.

Remember when Justin Trudeau promised to re-do the NEB review of Trans Mountain, but instead tacked on an “interim” process led by a Ministerial Panel, which travelled along the pipeline route listening to the concerns of residents? Even the Ministerial Panel recognized that knowledge about dilbit was limited:

This is a subject area beyond the panel’s expertise and one in which a good deal of additional research has occurred even since the NEB issued its report, but there appears, on one hand, to be a lively academic conversation about how much more complicated a dilbit spill might be in the long term.

Unfortunately, the Ministerial Panel did not appear to have much impact on the Federal Cabinet’s final decision, which adopted the NEB’s earlier recommendation and 157 conditions without a single change. Effectively, in approving the Kinder Morgan project, the NEB and the federal government punted the question of whether Kinder Morgan could demonstrate its ability to respond to, recover from and mitigate dilbit spills, until documents filed just 6 months before commencing operations.

This means that BC’s actions to study dilbit complement, rather than frustrate the NEB’s recommendation and Kinder Morgan’s commitments. Not only that, they complement recently announced federal plans to invest 45.5 million in further studies about oil spills, including the behaviour of dilbit if spilled and its impacts.

As stated by our friends at Raincoast Conservation Society:

The B.C. government’s introduction of such a precautionary policy would seem eminently reasonable. In essence, what the province has done is move to fulfill the responsibility the National Energy Board deliberately and imprudently abdicated.

So there you have it. BC is doing the job that the NEB failed to do, and which Kinder Morgan has supported: to better understand the risks and behaviour of a toxic substance to inform spill response.

Unless Condition 124 is completely without teeth (a big “but” given that it is administered under the purview of the industry-captured NEB), the only difference is that the federal government approved the project, pending final submission of documents demonstrating a spill can be cleaned up, while BC has proposed the more precautionary approach of pressing pause and allow the studies to be done first. Given the NEB’s past track record of putting timelines ahead of science, stepping in to be sure the scientific work is done in a timely way seems a prudent move that BC has proposed taking on behalf of its residents.

There are still a number of unknowns about BC’s scientific advisory panel. Will it be a literature review, or will researchers conduct experiments in various water conditions to fill the knowledge gaps? Will it include impacts on human health? These are all legitimate questions squarely within provincial jurisdiction.

At the end of the day, the government of BC has a right and a responsibility to protect the health and safety of its residents. This is what the diluted bitumen study is all about. As to the potential success of any legal or constitutional challenges over BC’s proposed actions, it is entirely too soon to speculate what the courts might do, given that the actual content of the proposed regulation has not even been released yet.