BC’s new anti-SLAPP bill is a victory for justice 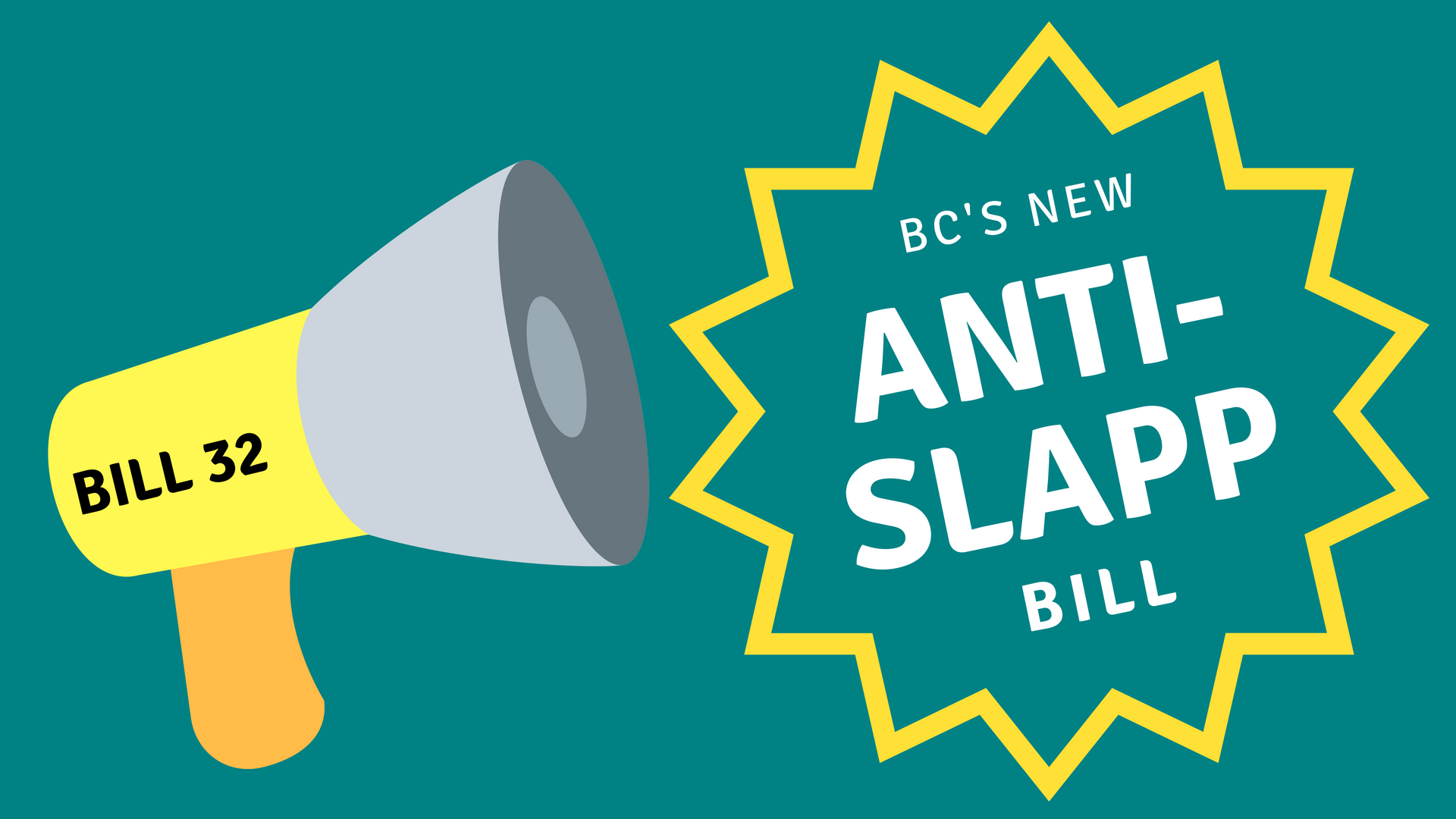 West Coast Environmental Law was thrilled when the BC government tabled Bill 32, the Protection of Public Participation Act on May 15th, and nobody was happier than those of us in the Environmental Legal Aid department.

Over the years, our Environmental Dispute Resolution Fund (EDRF) has supported environmental defenders who were hit with Strategic Lawsuits Against Public Participation (SLAPP suits) for speaking out about environmental concerns at public meetings, for posting opinions or information on social media platforms, or for reporting illegal beach construction to their local government.

The story of EDRF grant recipients Ed and Sheila is a perfect example of why legislation is needed to protect British Columbians from SLAPP suits. If anti-SLAPP legislation had existed when Ed and Sheila were sued, they could have applied to the court for a quick dismissal of the lawsuit based on its outsized impacts on their freedom of expression. Instead, they spent eight years in court.

When Ed and Sheila moved to the Botanie Valley near Lytton, BC in 2009, their plan was to enjoy their retirement in one of the most beautiful parts of the province. Shortly afterwards, a commercial composting facility run by Northwest Organics opened on the property next door. Ed, Sheila and their neighbours were concerned about the possibility of odours and pests coming from the facility and expressed their views in meetings and conversations around town. Just before Christmas in 2010, Ed and Sheila were sued because they (and others) had complained about the facility’s odours and other environmental impacts.

The plaintiff, Northwest Organics, wanted “at least $400,000” for alleged damage to its reputation and unlawful interference with its business. The case against Ed, Sheila and their neighbours smelled suspiciously like a SLAPP suit.

We’ve written about SLAPP suits previously (see here, here and here), but briefly, SLAPP suits are abusive lawsuits that are not necessarily meant to win at trial, but rather use the legal process to silence and intimidate opponents. Even SLAPP suits that settle out of court still burden defendants with substantial financial and emotional costs. In other cases, people censor or silence themselves rather than risk being SLAPPed by a deep-pocketed and litigious opponent.

The compost case worked its way slowly through the court system, exposing Ed and Sheila to eight years of stress and fees. The case survived Sheila’s efforts to have it dismissed as a SLAPP suit, largely because the existing legislative framework was not set up to deal with SLAPP suits as a phenomenon.

Finally, in May 2018, the BC Supreme Court dismissed every allegation against Ed and Sheila in a thoughtful and thorough 103-page judgement. The judge found that Northwest Organics had failed to prove any of its allegations against Ed, Sheila, and the other defendants (with the exception of one defendant who did not participate and was found guilty by default). Some of the allegations were not properly pleaded, while others were unsupported by the evidence. Significantly, the judge found that Northwest Organics’ key allegations did not have a defamatory meaning. In other words, this case had no merit. In our view, it likely would not have survived a challenge under BC’s proposed new anti-SLAPP legislation, had that legislation existed in 2010. With that, I turn to our analysis of Bill 32.

Our analysis of Bill 32

If Bill 32 had been law when the court case against Ed and Sheila was filed, they could have applied to have the court dismiss the case early on due to its impacts on their freedom of expression. This would have saved Ed and Sheila years of aggravation, and it would have saved the resources expended by all parties – including the taxpayer resources required to sustain a lawsuit through eight years in court.

Similar to existing anti-SLAPP laws in Ontario and Quebec, BC’s proposed new anti-SLAPP legislation will establish an expedited process for defendants like Ed and Sheila to ask the court to dismiss a lawsuit if it interferes with their freedom of expression. This process would apply to legal actions that arise from an “expression” made by the applicant on a matter of public interest. The law would also allow the court to fully compensate defendants for costs and award additional punitive costs against the plaintiff, if the court determines that the lawsuit should be dismissed.

We’ve analyzed the Bill and in general it’s good, although there are some important things that should be added for it to be truly effective. Here is our list of the positive elements, the things to watch, and things that are missing from the Bill:

The definition of “expression” is broad. Expression is defined as “any communication, whether it is made verbally or non-verbally, publicly or privately, and whether it is directed or not directed at a person or entity.” This is good because freedom of expression is a fundamental value of our free and democratic society, and protections for it should be broad.

The Act will apply to existing and future lawsuits. Section 2 of the Bill holds that the legislation will apply to cases that were launched before it came into effect. This means that defendants in SLAPP suits that are currently proceeding can apply to have their suits dismissed once the Bill becomes law. This is really good, and gives some hope to people fighting these David and Goliath battles that help is on the way.

The Act holds the proceedings. Section 5(1) of the Bill puts the lawsuit on hold as soon as the defendant appeals to the court, until their application to dismiss it as a SLAPP suit has been resolved.

In general, the Ontario legislation appears to be striking an appropriate balance between protecting freedom of expression on the one hand and protecting against false or defamatory statements on the other. However, some concerns remain because some judges have been reluctant to throw out cases without a full hearing, and so have interpreted the legislation in weak ways that make it easier for plaintiffs to argue that their lawsuits have merit. Meanwhile, other judges have adhered more closely to what we believe was the intent of the Act, and interpreted the law in a way that means defendants like Ed and Sheila have a better chance of getting meritless cases dismissed.

The Ontario Court of Appeal will provide clarity on the proper application of the anti-SLAPP law at some point, since that court heard several relevant cases about a year ago. While Ontario decisions are not binding on BC courts, we can expect our courts to consider Ontario’s experience given that the tests are identical.

Section 5 of the Bill does not apply to injunctions. An interim injunction is the order of a judge requiring the parties (and sometimes others) to stop doing something until the hearing of the lawsuit. In the context of SLAPP suits, injunctions often amplify the effect of the underlying SLAPP suit. For example, a plaintiff may bring a lawsuit against a defendant for something that the defendant said, wrote, or otherwise communicated, and ask the court for an injunction at the same time. The injunction will stop the defendant from saying or doing that thing until the court case has been heard.

Recall that section 5(1) of the proposed anti-SLAPP law places the lawsuit initiated against a defendant on hold until the defendant’s application to have the suit dismissed as a SLAPP has been resolved. However, section 5(2) of the Bill makes it clear that this hold does not apply to applications for injunctions. This likely means that a plaintiff may apply for an interim injunction even while a motion to dismiss its lawsuit as a SLAPP is being heard. Consequently, an application to dismiss a lawsuit as a SLAPP suit might be heard alongside, or even after, an application for an interim injunction. How that will play out in practice is an open question.

A statutory right is important because SLAPP suits almost always take place between private parties (i.e. the government is not a party). The Canadian Charter of Rights and Freedoms, with its protections for freedom of expression and association, does not apply to disputes between private parties. The result is a gap in constitutional protection, and many have argued that truly effective anti-SLAPP legislation must recognize a right to public participation in order to fill that gap (see here, here and here).

In an important early article on SLAPP suits in Canada, Professor Chris Tollefson argued that an effective statutory right to public participation should include the following:

To provide optimal anti-SLAPP protection, the right should be framed as broadly as possible so as to encompass the diverse ways in which citizens participate directly or indirectly in the processes of government. The right should therefore include, but not be limited to, the right to communicate with all levels and arms of government (including the judiciary) on matters of public policy. Communication should be defined to include traditional lobbying activities, as well as other forms of participation including demonstrations, boycotts and the pursuit of judicial and administrative remedies. Communications directed at the public at large should also be specifically protected.

As we wrote back in 2000 (the first time the provincial government considered anti-SLAPP legislation), a broad statutory right of public participation “should be coupled with a prohibition on bringing or maintaining an action against another person for the exercise of that right or any act done in furtherance of the right.” Many lawsuits designed to silence public expression and protest about matters of public interest in BC allege trespass or economic torts such as unlawful interference with economic interests, conspiracy, or inducing breach of contract.

Similar lawsuits and related injunctions were once commonly used by companies against union organizers and striking workers before modern labour laws were put in place. Labour statutes have recognized this and today protect workers through provisions like section 66 of the BC Labour Relations Code:

No action or proceeding may be brought for

(a) petty trespass to land to which a member of the public ordinarily has access,

(b) interference with contractual relations, or

(c) interference with the trade, business or employment of another person resulting in a reduction in trade or business, impairment of business opportunity or other economic loss arising out of strikes, lockouts or picketing permitted under this Code or attempts to persuade employees to join a trade union made at or near but outside entrances and exits to an employer's workplace.

Similar language explicitly protecting public participation would ensure that the Protection of Public Participation Act is as strong as it can be, and is inclusive of all lawsuits aimed at silencing public expression in BC.

Overall, Bill 32 is a very positive development for the protection of free expression in BC, and we congratulate the provincial government for introducing this much-needed legislation. By discouraging abusive lawsuits intended to stifle debate, this new Bill will give British Columbians more freedom to voice their opinions on a wide range of issues – including matters affecting their communities, the environment and human rights.

It is anticipated that Bill 32 will become law in the fall.