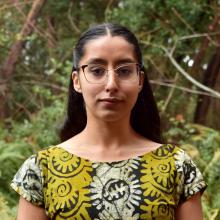 Navjot Jassar (she/her) is an articled student at WCEL with the RELAW team. She is Punjabi, with roots in farming villages from the land of the five rivers that flow from the western Himalayas. She has spent most of her life in Treaty 7 lands, the traditional territories of the Blackfoot Confederacy (Siksika, Kainai, Piikani), the Tsuut’ina, the Îyâxe Nakoda Nations, and the Métis Nation (Region 3).

Navjot has been engaged in collective surviving and thriving while dismantling colonial violence throughout her life. This led her to join the inaugural cohort of the JD/JID Joint program in common law and Indigenous Legal Orders at the University of Victoria. During this time, she worked on Indigenous law projects led mostly by coastal Indigenous peoples. She also worked at Together Against Poverty Society advocating on behalf of community members in accessing the necessities of life and was involved in human rights and water protection campaigns as a National Organizer for Amnesty International Canada.

Before law school, Navjot worked in a support, advocacy and harm reduction role with Indigenous families moving towards reunification of their families and out of the child welfare system. She has also worked extensively with young people in a variety of roles from after school programing for marginalized youth to crisis line support. She has learned a great deal through community-based service projects across nations on rebuilding sovereign societies as a student during her undergraduate studies at the University of Calgary.

Creative movement, plant medicine and felines are some of the life-affirming forces Navjot cherishes most. She is grateful for the privilege to learn the first laws of the lands occupied by Canada and to work alongside Indigenous peoples in revitalizing their legal orders.