Our team » Staff » Maxine Hayman Matilpi
Back to top 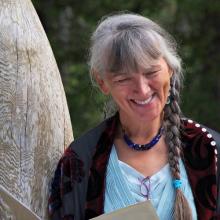 Maxine Hayman Matilpi, J.D., LL.M, is a member of the Ma'amtigila and Kwakiutl First Nations, the eldest grandchild of Violet (nee Matilpi) and Willi Hunt. A former lawyer, chief negotiator for the Kwakiutl First Nation (Tsakis),  instructor at Vancouver Island University (First Nations Studies and Women’s Studies), and Director of the Academic and Cultural Support Program at UVic’s Faculty of Law, her research interests are Indigenous Law and Indigenous Pedagogy. Her LL.M. research involved working extensively with her cousin, Maxine Dora Rose Matilpi, to produce eleven Button Blankets which became part of an installation with projections of photos, text, film and sound-scape illustrating the juxtaposition of colonial and Kwakwaka’waxw law.

Maxine grew up in Tseil-Waututh Territory where her social activism started early. As a child, in solidarity with Cesar Chavas and agricultural workers in California, for close to five years her family stopped eating grapes and started talking on a daily basis about exploited workers and the benefits of union membership.  Later, her activism led her to the practice of midwifery (long before it was legal in BC) giving women and families a choice about where and how to birth their babies.

Maxine has also served as an Elder-in-Residence at North Island College in Lewquiltok Territory. She lives in Komox/Pentlatch Territory on a northern Gulf island where she practices “re-creation” through making art, dancing, and growing potatoes.