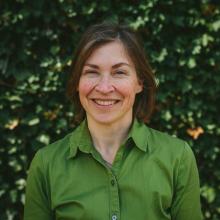 Deborah (she/her/hers) joined West Coast in 2010 as Staff Counsel for the Green Communities Program. She works with communities in BC to develop legal frameworks that support healthy, low-impact urban areas, and community-based planning processes that start from our connection to the natural environment.

At West Coast she has focused on climate change challenges, and how communities can adapt and thrive with ecosystem-based responses. She is author of Preparing for Climate Change, An Implementation Guide for Local Governments in British Columbia (2014), a resource that explains the legal tools available for implementing climate change adaptation strategies at the local level. The Green Waterfront Design Charrette Report (2016) documents new, multidisciplinary visions for waterfront communities and highlights legal opportunities and needed reform.

Deborah has partnered with the Adaptation to Climate Change Team at Simon Fraser University to develop and deliver community engagement workshops. Further work supports collaboration and law reform for coastal ecosystem protection and restoration as a vital response to climate change.

Prior to West Coast, Deborah worked at the David Suzuki Foundation. She supported climate action by Canadian municipalities, and developed strategies for businesses and decision-makers (including the Vancouver Olympic organizers) to manage and reduce their climate impacts.

She holds civil and common law degrees from McGill University and was called to the B.C. Bar in 1997. She practised litigation in Vancouver until 2002. From 2002-2005 she worked in Geneva assisting Holocaust survivors achieve redress following the settlement of a major U.S. class action brought against Swiss banks.