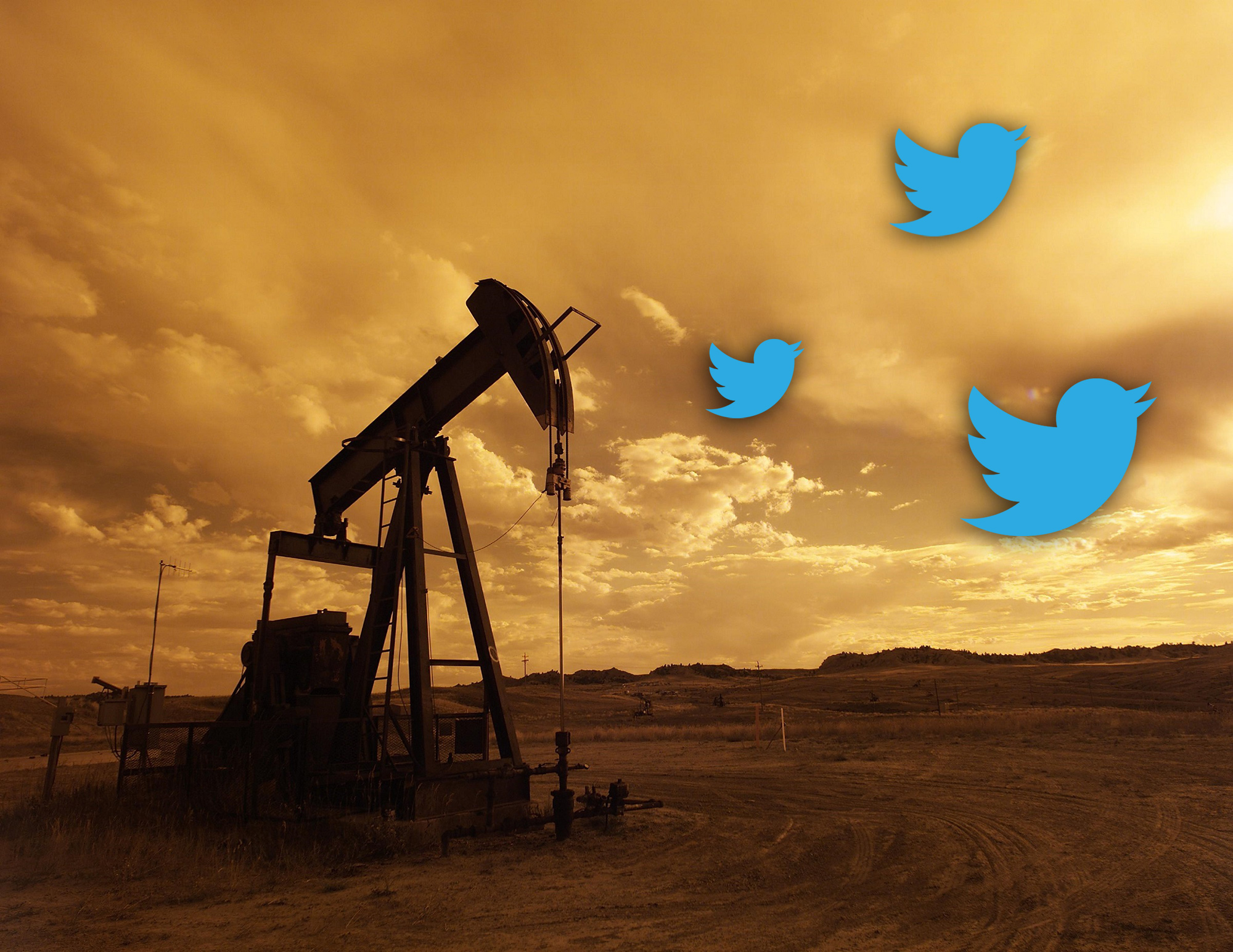 Our Climate Law in our Hands campaign recently attracted national attention when Alberta’s oil and gas industry took offence at a letter by Whistler sent to Canadian Natural Resources Ltd. (CNRL). Since then we’ve received a barrage of tweets, posts, comments and emails on the campaign, ranging from the supportive to the hostile.

Climate Law in our Hands focuses on the power of our communities to demand that the fossil fuel industry – and not just taxpayers – pay a fair share of the local climate-related costs that we face.

Sixteen local governments have voted to send letters to Chevron, Exxon, Saudi Aramco and 17 other global fossil fuel companies that are collectively responsible through their operations and products for almost 30% of human-caused greenhouse gases (GHGs). The letters describe each community’s climate costs and ask the companies to pay a fair share of those costs.

We are grateful to all who took the time to contact us, and wanted to address some of the critical questions and comments that we received.

These questions relate to:

There’s no way around it: solving climate change means dealing with our collective fossil fuel dependency. Plentiful and relatively cheap energy from fossil fuels brought many benefits to modern society, but we’re now realizing that there were enormous deferred costs associated with its use and the build-up of greenhouse gases in our atmosphere.

With nearly every facet of our society built around fossil fuels, who is responsible for climate change? Who should lead our fossil fuel addicted society in shifting to clean energy, or pay the costs associated with climate change? These are big questions – and many of our critics felt we had grossly oversimplified by advocating for letters directed at fossil fuel companies.

Some observers felt that individual consumers are entirely responsible, while others appeared to argue that car manufacturers or other industrial sectors should be accountable rather than the fossil fuel industry. 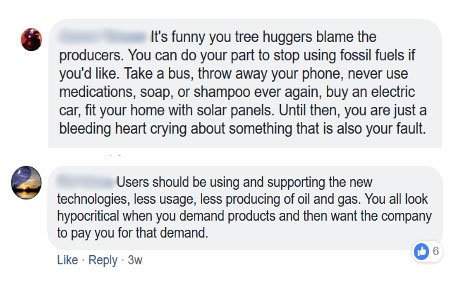 We agree: we all need to take a critical look at our lifestyles and try to reduce our fossil fuel use.

Unfortunately, right now taxpayers are bearing the entire burden of the climate costs caused by fossil fuels, while fossil fuel producers continue to make a lot of money from selling them. Asking companies to bear some of those costs is not about blaming the industry or denying the responsibility of us all as individuals – it’s about no longer placing all the blame and responsibility on ordinary people who often have limited choices.

Putting 100% of climate costs on taxpayers is not only unfair, it’s bad economics: if a company benefits from pollution without paying a share of the costs, it has no incentive to shift towards a less polluting business model.

Practically speaking, at some point our communities will no longer be able to afford the massive costs of climate change – of wildfires, flooding, building climate-resilient infrastructure – by themselves.

Big Tobacco, Asbestos, and Big Pharma have all learned that if you sell a product that is killing people or harming communities, you’re going to have to pay some of the costs caused by your product. Until they learn that lesson, Big Oil, Big Gas and Big Coal have a strong incentive to continue doing everything they can to increase fossil fuel production, and dragging their feet towards cleaner alternatives.

However, the trillion-dollar fossil fuel industry has the resources and knowledge, and the innovative workers, who could help shift our society very quickly “beyond petroleum” – if they have the incentive to do so.

Individual consumers do play a role in reducing fossil fuel use. However, many of us are working to reduce our personal emissions and at present we have limited choices for a low-carbon lifestyle. This is due in no small part to the efforts of the fossil fuel industry, governments and investors who believed that fossil fuels would continue making a lot of money while the resulting costs were left unaccounted for. 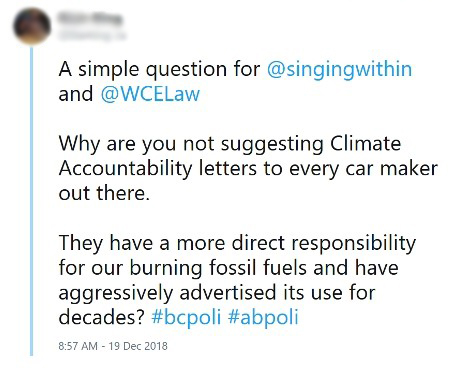 The burning of fossil fuels for energy produces “over two-thirds of total greenhouse gas emissions.” Consequently, the fossil fuel industry has played a huge role in making climate change possible.

The 20 oil, gas and coal companies that have received Climate Accountability Letters from BC communities have caused – through their operations and products – almost 30% of human-caused greenhouse gas emissions in the global atmosphere; Chevron, historically the largest oil producer, stands at 3.34% of all human-caused GHG emissions.

Virtually every segment of our economy was designed around plentiful and seemingly cheap energy from the fossil fuel industry. When commenters argue that car companies are responsible for the burning of fossil fuels, they may be recalling the figure that the transportation sector is responsible for 14% of global GHG emissions, but that 14% is almost entirely from cars and other vehicles burning fossil fuels.

Similarly, manufacturing emissions, home heating and other sectors’ emissions are all primarily from the burning of fossil fuels within each of those sectors.

In terms of the volume of GHGs entering the atmosphere, there’s no contest: the oil, gas and coal industries play a far larger role in causing climate change than the automobile industry – or any other industry. For the less than 14% that is from car emissions, the automobile industry shares some responsibility with the oil and gas industry and with the drivers.

If oil, gas and coal companies were to include the true costs of their products in their pricing, this would affect a wide range of fossil fuel intensive industries while favouring industries and products that use less fossil fuels. In short – it would create an economic incentive to shift to alternatives.

The tweet above seems to argue that the auto industry’s responsibility is more “direct” because of the connection between the auto industry and the end-user. There is no doubt that car companies have played a major role in shaping our society, and clearly GM and Toyota need to start taking responsibility for their products and for their aggressive marketing of fossil fuel powered vehicles.

However, our campaign is focused on fossil fuel companies because their overall share is much larger and we believe they are directly responsible. Until a barrel of oil is extracted, processed and sold as fuel, it cannot be burned. As discussed above, cheap fossil fuels affect virtually every aspect of our society and fossil fuel companies have played an aggressive role in lobbying government and misinforming the public on climate science in order to maintain this market dominance.

Is it an attack on Alberta? 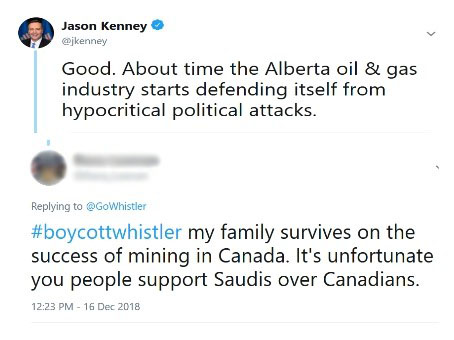 Far from being an attack on the Alberta oil and gas industry, the Climate Law in our Hands campaign focuses on the responsibility owed by 20 of the world’s largest fossil fuel companies, collectively responsible through their operations and products for almost 30% of human-caused greenhouse gas emissions. None of these companies are Canadian, but the Saudi Arabian company, Saudi Aramco, is the 3rd largest of the 20.

While Canadian companies should take responsibility for harm caused by their products, their fair share is far, far less than these major global players (CNRL’s products and operations have contributed an estimated 0.08% of human-caused greenhouse gas emissions, compared with Chevron’s 3.24%).

While letters are largely symbolic, communities in the U.S. (and Peru) have sued these same fossil fuel companies. Canadian communities also have the power to demand accountability from these international companies in Canadian courts, creating the exciting opportunity to send a message about the costs of climate change that goes far beyond our borders. We’ve pressed BC communities to launch a class action – and Alberta communities would be welcome to join in (they’ve clearly suffered from floods and wildfires too).

Finally, we don’t believe that it is an “attack” to politely ask a company (whether in Alberta or internationally) to take some joint responsibility for harm caused by its products.

Because fossil fuels are central to our society, just about anyone who calls for climate action can be quickly dismissed as a hypocrite – and we often are.

Whistler, which as a resort destination is dependent on fossil fuels, is particularly vulnerable to these accusations, and Mayor Jack Crompton addressed this at the municipality’s Council Meeting on December 18th (at 5:56):

[Whistler’s] letter came across as tone deaf and hypocritical. We did not acknowledge our community’s own climate footprint. We should have. We should have made our impact and our response the core of the letter. …

[A] friend pointed out to me that we’re all hypocrites on this, but that we simply can’t afford to wait until everyone has clean hands before we act. The challenge is too big and the urgency is too great. …. The time to act is now.

Like Whistler, every community and every individual in Canada uses fossil fuels to some degree.

A community that sends a climate accountability letter should work hard to reduce its contribution to climate change, but asking others to take shared responsibility – particularly when they’re making a lot of money causing the problem – is not hypocritical. We are all complicit in fossil fuel use, and we should all be part of the response. Nobody should be getting a free ride, the way the fossil fuel companies are at the moment.

Some people critiquing our campaign would like to believe that our communities are not facing increased climate costs (or, if they are, that fossil fuel companies have nothing to do with it).

Interestingly, none of the fossil fuel companies that have responded to the letters sent by municipalities have denied that climate change is harming communities or that fossil fuels are largely responsible.

The notion that climate change is not happening or that it’s occurring at a natural pace is wishful thinking. Municipal engineers, planners and Councils cannot afford this luxury, since they are required to use the best available climate science when they prepare municipal stormwater management plans, consider how to address wildfire risks, build new infrastructure or evaluate the range of climate-related risks facing their communities.

We need to ensure that our communities have the resources to prepare for the coming wildfires, floods, coastal erosion and extreme weather. Pretending won’t make that reality go away.

If we are going to solve climate change in the limited time we have, we need:

To stay up-to-date on our climate accountability initiative, click here to sign up for our Climate Law in our Hands newsletter.