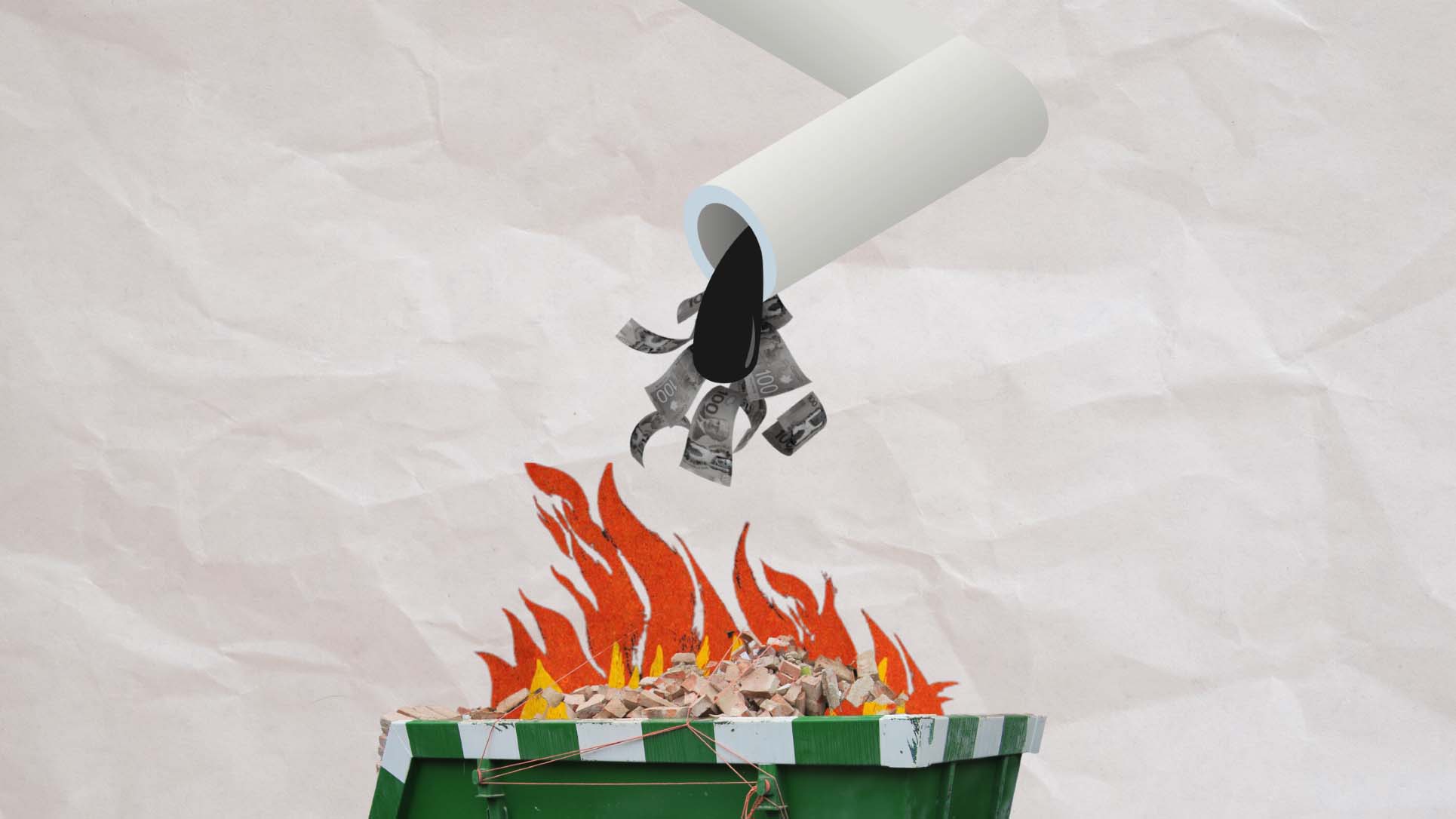 On Friday, February 18, 2022, just before a long weekend, and while the country was focused on the Trucker Convoy’s occupation of Ottawa, Trans Mountain Corporation released a long overdue cost estimate for the Trans Mountain Pipeline Expansion (TMX).

It had been over two years (and a global pandemic) since the Crown Corporation announced construction costs had jumped from $9.6 billion to $12.6 billion. The newest cost update of $21.4 billion is almost four times the original cost and more than double the cost when Canada bailed out Kinder Morgan by buying Trans Mountain in 2018. 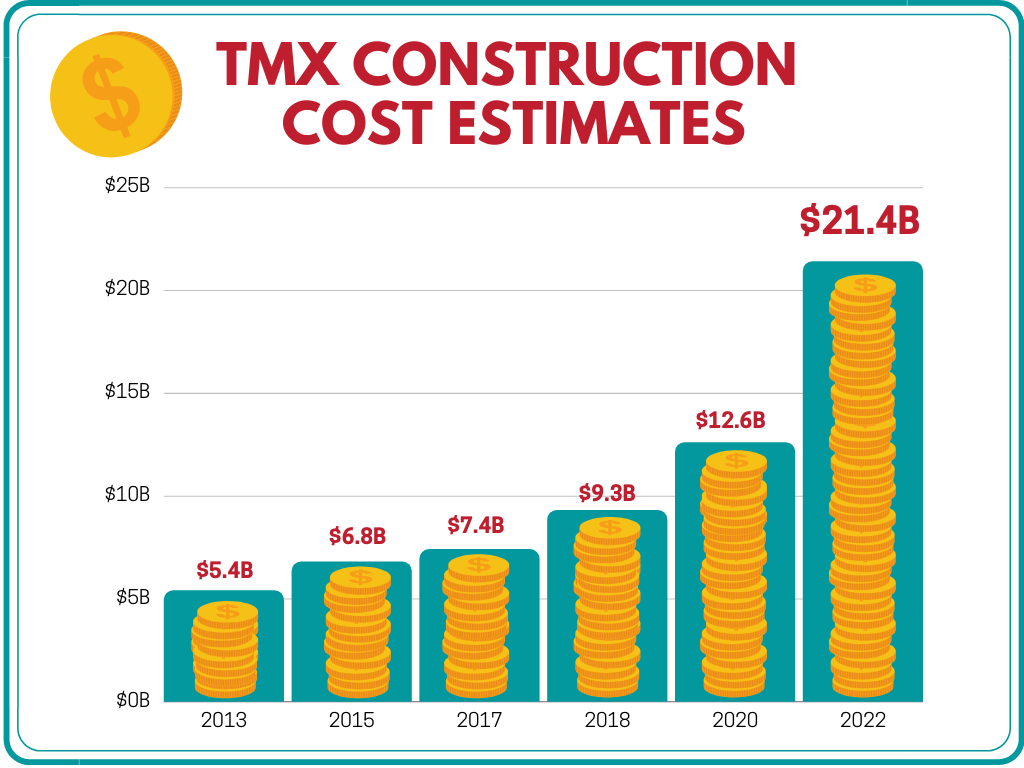 In response to the massive increase, Finance Minister Chrystia Freeland announced that the federal government would not invest any additional public funds into TMX, leaving roughly $10 billion to be funded by debt markets (ie. bonds) or private sector lenders like banks.

The federal announcement confirms that TMX is now as much of a political liability as a financial liability. However, Minister Freeland’s statement is misleading: even if the federal government does not invest further funds into TMX, taxpayers will be on the hook, as any debt incurred by a Crown Corporation is public debt.

As financial analysts and oil industry veterans have noted, no private sector institution would consider lending to TMX without a guarantee from the government.

Former Encana CEO Gwyn Morgan stated, “In the commercial (real) world, no one’s going to finance a project running vastly over budget, with no firm remaining cost or start-up date. So the only way for the Feds to ‘not spend another penny on it’ would be to provide a full guarantee. Either way, taxpayers are on the hook.”

Parliamentary Budget Officer Yves Giroux analyzed TMX’s economics in 2019 and calculated that a 10 percent cost increase (based on a construction cost of $9.3B) or a one-year delay (based on operations starting in 2021) would render the project uneconomic. With both of these events now far surpassed, the commercial viability of TMX is as bad as it has ever been, and is likely to get worse.

We expect further analysis from the Parliamentary Budget Office later this year, but it is already obvious to Giroux that, “Now that we're talking about over $20 billion in construction costs, it is clearly non-profitable.”

Any private lender will charge a higher interest rate than the federal government, meaning that the cost to finance TMX’s construction will increase significantly.

A recent example of this type of arrangement was the Alberta government’s loan guarantee for the now-cancelled Keystone XL pipeline. When TC Energy wrote down $2.1 billion at the end of 2021 related to the pipeline, Alberta had to pay the company’s $1 billion loan balance pursuant to its guarantee (see p.20).

Investor beware, there are no profits here

A new report from the Institute for Energy Economics and Financial Analysis (IEEFA) analyzes the recent Trans Mountain updates and shines some more light on the implications of the recent announcements.

In their report, IEEFA’s analysis finds that: 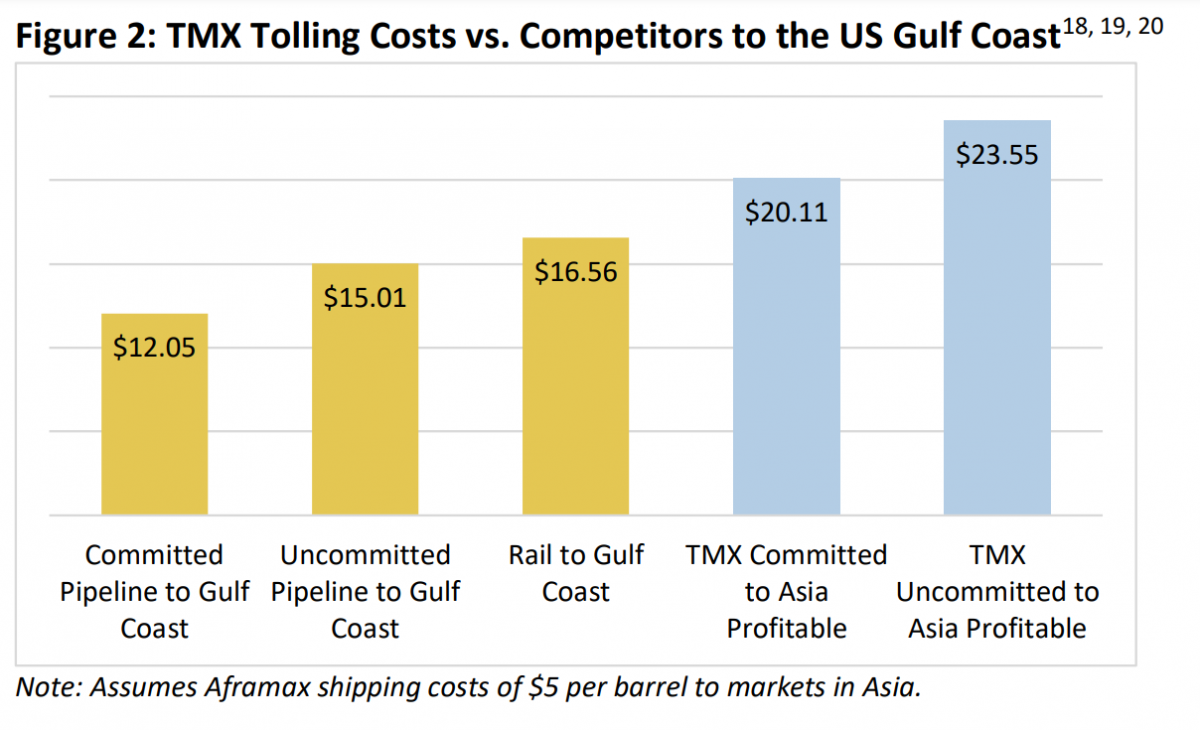 The $17.3 billion already spent on the project will never be recovered; and guaranteeing another $8.8 billion to complete the project will simply be throwing good money after bad, for a total taxpayer loss of $26.1 billion.

It appears that the Finance Minister may also understand the challenges facing TMX, as her press release subtly lowered expectations by changing the federal government’s previous tune that TMX would be “extremely profitable,” to having “confidence that previous public investments in the pipeline will be recouped, with the potential for a positive financial return.”

Why TMX has a toll problem: an explainer

The unique nature of TMX’s negotiated toll structure (PDF), approved by the National Energy Board in 2013, gives oil companies a virtually free ride on the TMX pipeline.

Tolls are the fees charged by pipeline companies to their oil company customers (known as shippers) to use the pipeline, not unlike a toll on a highway. Typically, tolls are structured to cover the cost of construction and operation, plus a profit margin for the pipeline owner.

Under this ‘cost of service model,’ an increase in construction or operating costs would be passed along to customers via higher toll rates. However, because the cost of transporting oil makes a difference to the profit margins of the oil companies, pipeline companies and their customers often negotiate settlements to balance out their interests so that there are incentives to control costs and run pipelines efficiently.

For TMX, the negotiated toll includes capped costs, which have a built-in limit to how much can be recovered from shippers, and uncapped costs which can be fully recovered. Operating costs are also split into Fixed Tolls and Variable Tolls as a way to constrain increasing operating costs.

Uncapped costs include things like the price of steel (incidentally, purchased from a Russian oligarch); the cost of building some of the sections, including Coquihalla Summit, Burnaby Tunnel and the section from Langley to Burnaby; plus consultation and accommodation costs for Indigenous and non-Indigenous communities. Everything else is a capped cost, which Trans Mountain states represents about 75% of costs.

All of this means that billions of dollars will have to be absorbed by Trans Mountain, and the toll structure will eat into any profits for the next 20 years.

Put another way by the Sightline Institute, “These contracts mean that in a best-case scenario, Can$10.9 billion of capital costs can be covered by shipping revenue.” 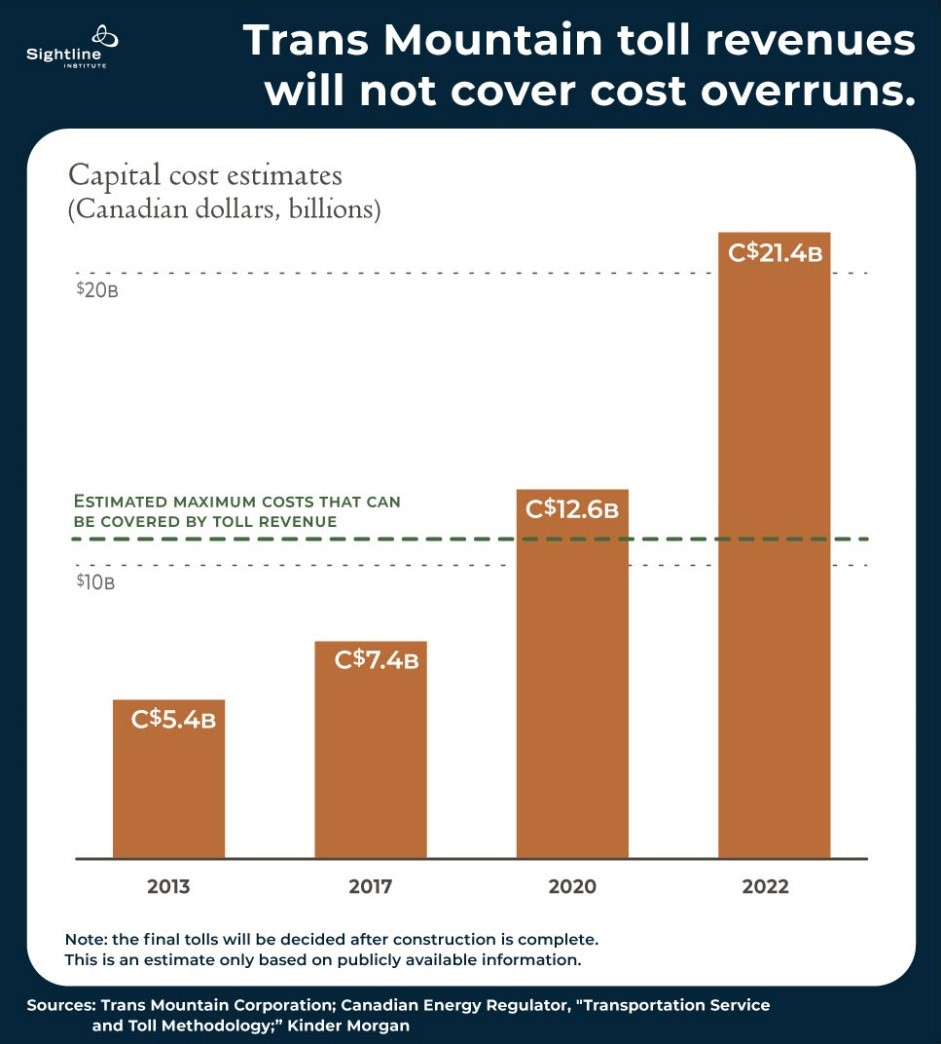 The capped costs were based on a $7.4 billion cost, when Canada purchased TMX in 2018. When the 25/75 ratio is applied to the new cost of $21.4 billion, it means that of the $14 billion difference, only $3.5 billion can be passed along to shippers via tolls, and the remaining $10.5 billion is not recoverable. No wonder the PBO called TMX ‘clearly unprofitable’. Even worse, TMX is a White Elephant that will continue to be a money losing albatross for whomever is the owner.

To make matters worse, the toll structure also limits Trans Mountain’s ability to fully recoup operating costs of the pipeline in addition to the massive construction costs. Here’s why: the Toll Methodology (PDF) sets out two components of the toll: a fixed toll (Category 1), which limits how much can be recovered from shippers, and a variable toll (Category 2) which passes along increased costs.

The variable toll includes costs that are not controllable or anticipated by Trans Mountain, including the cost of electricity, tax increases, regulatory changes and other ‘uncontrollable costs.’ The fixed toll is everything else, including all ‘controllable’ or ‘anticipated’ costs such as wages and salaries, insurance, plus operation and maintenance costs related to integrity and pipeline safety. Fixed tolls also include costs for spill response and clean-up.

The toll includes a 2.5% annual escalator to cover cost increases related to inflation. However, any cost increases over that amount would not be recovered by TMX tolls. In other words: Every dollar spent on integrity or safety or spill response and clean-up is a dollar that Trans Mountain cannot recover as return on capital.

This is hugely problematic because it provides a financial disincentive for Trans Mountain to spend money on integrity and safety of the pipelines as well as spill response and clean-up. This includes the original 1951 Trans Mountain Pipeline which has spilled 85 times since 1961. It also means that increased operating costs will eat into TMX’s already meagre returns.

This problem was confirmed by Trans Mountain’s VP of Regulatory and Finance, Scott Stoness in the 2013 toll hearing (PDF see para. 4520 - 4531):

4521. [NEB lawyer]: In the response to IR 1.2(a), Trans Mountain states that: “Anticipated and unanticipated costs […] in Category 1 are included in the Fixed Toll Component. [and] […] to the extent these costs increase, the financial return that Trans Mountain achieves will diminish.”

4522. Is it fair to say that the integrity and pipeline safety costs are Category 1 costs?

4523. MR. STONESS: Yes. However, if they were -- are a -- as a result of a change in legislation or a change in Board order, then it would fall into Category 2.

4527. [NEB lawyer]: So to the extent that any incremental integrity and safety costs arise after commencement of operation and for the duration of the contracts, those costs will be at risk -- the Trans Mountain will be at risk for those costs; is that correct?

4528. MR. STONESS: That is true. And let me correct the first part, is that normally those kind of costs will fall into Category 1, but your question is -- the answer to your question is yes.

4530. [NEB lawyer]: So practically speaking, every dollar spent on integrity or safety is a dollar that Trans Mountain cannot recover as return on capital; is that correct?

The current tolls are also a subsidy to oil companies

Economist Robyn Allan, the former CEO and President of ICBC has been talking about the subsidies embedded in the original Trans Mountain pipeline tolls for years.

Because Canada purchased the existing Trans Mountain pipeline from Kinder Morgan as a share purchase rather than an asset purchase, they did not have to include the cost of acquisition in the application for tolls charged to shippers. So, instead of a $3 billion value (what Canada paid), the tolls are based on a $1 billion asset value, meaning that Trans Mountain is not recovering the cost of buying the pipeline through current tolls.

Furthermore, only about half of the interest for the money Canada borrowed to purchase Trans Mountain is recovered in the tolls, known as an Incentive Toll Settlement (ITS). Allan calculates that this amounts to a $3.2 billion subsidy over five years.

In December 2021, the CER quietly approved the extension of the ITS to 2023 which continues to value the original pipeline at $1 billion, all but ensuring that this subsidy will continue.

If TMX is completed, then the tolls discussed above, approved in 2013 by the NEB, will apply to the whole system, further baking in the steep discount for oil companies at the cost of the pipeline owners.

As Andrew Nikiforuk states, “TMX Will Endlessly Spill Taxpayers’ Money” due to these structural challenges.

The good news is that if TMX cannot get the remaining funding it needs from the private sector, it will not be able to complete construction. Our friends at Dogwood BC have put together a petition here for you to tell the banks how you feel about them funding TMX and the climate crisis.

The invasion of Ukraine by Russia has destabilized the world, and wreaked havoc in the global energy sector. As a result, gasoline prices have risen dramatically around the world. Unsurprisingly, the oil sector and their cheerleaders tried to leverage the invasion to push their agenda, in a display of crass opportunism.

It is important to note that even if TMX were built today, gasoline prices would still have skyrocketed. In fact, it could be argued that because TMX is entirely about export, it would be more susceptible to the volatility of world oil prices and we would see even greater increases at the pump.

Instead of spending billions on new fossil fuel infrastructure, we should be investing in renewable energy systems that are less vulnerable to volatile commodity prices, more resilient to climate-related disasters, and less likely to get tangled up in global geopolitics.

Let us not lose sight of the bigger picture of the horrors of war, the close links between violent conflict and fossil fuels, and the impacts of climate chaos driven by our addiction to fossil fuels. This open letter, signed by 1000+ environmental, legal, and peacebuilding experts puts it this way:

The Russian invasion of Ukraine and the economic weaponization of Russia’s oil and gas resources against those nations who would come to Ukraine’s aid is a stark reminder of the recurring intersections between fossil fuel resources and violent conflict. As the Intergovernmental Panel on Climate Change releases its latest stark warnings about humanity’s dwindling window of opportunity to avert truly catastrophic and irreversible climate chaos, Russia’s invasion of Ukraine is a grim reminder of the vital importance and urgent necessity of ending the world’s reliance on fossil fuels.