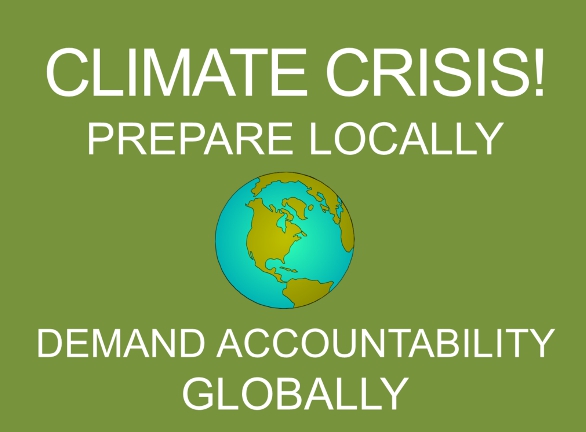 President Trump’s withdrawal from the Paris Climate Agreement is disappointing, outrageous and immoral. And it should surprise no one.

We’ve seen time and again that countries with major fossil fuel industries are very reluctant to put the health of the planet ahead of their short-term economic gain. The reality is that it’s going to be extremely challenging to solve climate change as long as the world’s largest corporations and economies are making an awful lot of money from causing it, with no plans to pay their fair share of the costs. It’s just too lucrative to trash the global atmosphere and leave others to clean up the mess.

But – and here’s the good news – this latest setback is also an opportunity! Rather than depending on governments to act on climate change, our communities have the power to demand that the industry pay a fair share of the costs of climate change. Demanding accountability will force fossil fuel companies (and the governments that benefit from the fossil fuel economy) to confront the true costs of their business model.

Here’s how it can be done.

Exposing the costs of the fossil fuel economy

The fact is that the fossil fuel economy, and fossil fuel companies, appear profitable only because the Chevrons and Exxons of the world don’t expect to ever pay their fair share of the costs of their products. If they had to pay even a fraction of their true costs, they would not be able to outcompete renewables, creating a real incentive to work towards future free of fossil fuel pollution. 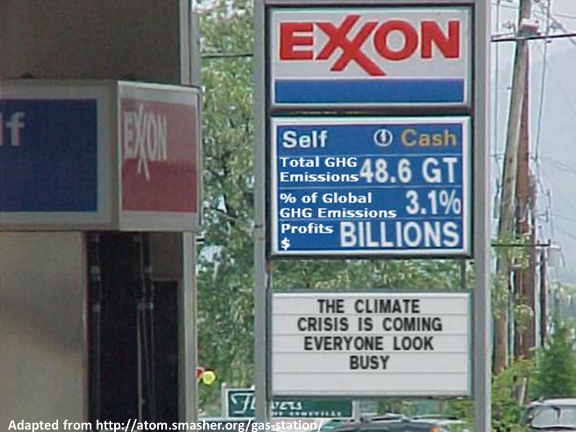 In other industries, we recognize that companies have a responsibility to pay for harm caused by their products, and we expect them to take “cradle to grave responsibility” for those products. Car manufacturers will repair a defective car and drug manufacturers are on the hook when the sell products that they know cause harm.

But every day, fossil fuel companies sell products that they know (and have known for decades) will degrade our global atmosphere and harm people and communities, and yet somehow they view themselves as different – insulated from legal or moral responsibility for the harm that their products cause.

This has to change.

What we need is for Trump, for fossil fuel companies and their investors, for society at large to recognize that the harm caused by the fossil fuel economy is not only real, it is a liability for those responsible. In order for the fossil fuel industry – and everyone else – to realize that it might need to pay its fair share of that harm, two things are necessary:

If it is possible to hold the fossil fuel industry accountable, but no one really wants it, then it’s not going to happen. And if it’s not possible, then who cares if it would be popular.

Fortunately for those of us who would like to see global action on climate change, communities can answer both of these questions – with a loud yes – at the local level.

Why our communities need to demand accountability

We’ve already mentioned a compelling reason to demand accountability from fossil fuel companies: to create economic incentives for real action on climate change. Solving climate change requires that everyone get on board, and up to now the fossil fuel industry and governments that are beholden to them have often been pulling in the other direction.

But here’s another important reason – responsible management of taxpayer dollars.

Right now everyone assumes that taxpayers will pay 100% of the cost of rebuilding communities after flooding or wildfires that were caused by climate change, and that fossil fuel companies will pay nothing. With disaster relief costs rising from an average of $10 million/year prior to 1995 to $360 million/year between 2011 and 2016, it is time to ask whether anyone other than taxpayers have a responsibility to pay a share.

Last month Prime Minister Trudeau, speaking of flooding in Quebec, assumed that taxpayers would pay when he emphasized the need to incur costs now to avoid future climate impacts:

We're going to have to understand that bracing for a hundred-year storm is maybe going to happen every 10 years now or every few years. That means as we look to rebuild our communities, our homes, our infrastructures, we're going to have to think about what we can do to rebuild better, to rebuild in ways that are going to be more resistant, more resilient to the unpredictability we are now living. … [I]t might be more expensive to rebuild better now, but that’ll certainly be less expensive than the clean-up and the disaster response that’s going to increasingly have to happen if extreme weather events keep going the way that they are. [Emphasis added]

These costs are going to continue to rise – and even more so if the fossil fuel industry continues extracting its reserves and selling oil, gas and coal to the world. Taxpayers must demand a new conversation.

While we all contribute to some degree to climate change, the products and operations of just 20 fossil fuel companies have led to almost 30% of human-caused greenhouse gas emissions. Those companies have made hundreds of billions of dollars of profits selling the products that cause climate change, and have lobbied against climate action and misled the public about climate science.

Many climate costs are already being incurred in our communities. That is why we’ve been asking local governments to take first steps to hold the fossil fuel industry accountable. Doing so creates space for real climate leadership – by exposing the true costs of the fossil fuel industry – and represents responsible management of taxpayers’ resources.

There has been a lot written by experts debating the question of whether fossil fuel companies might be sued for climate change, giving the impression that it is an arcane and speculative topic that need not concern the public. But ordinary people are starting to demand accountability. In addition to BC’s Climate Law in our Hands Initiative, people in the Philippines have petitioned their country’s Human Rights Commission to investigate the role of fossil fuel companies in causing climate change, and a Peruvian farmer (Saul Luciano) is suing the German coal giant RWE for climate impacts affecting his village.

It turns out that our local and national governments have a whole lot of power to demand accountability for the true costs of fossil fuel pollution. As we pointed out in Taking Climate Justice into our own Hands:

A country has legal authority over harm that occurs within its borders, even if the causes of that harm are global.

What that means is our communities can sue for climate-related harm that they are suffering, in our own courts, under our own laws. U.S. fossil fuel companies – the ones that President Trump thinks he’s helping by withdrawing from the Paris Agreement – can be made accountable in the courts of Canada for their global contribution to Canadian climate impacts (and the same goes for Bangladesh, Tuvalu, Kenya and all other countries where climate claims might be brought).*

Rather than waiting for international negotiations, countries that are harmed by climate change can create consequences for the role of fossil fuel companies in causing climate change.

That may be possible under a country’s current laws (and we believe that it is here in Canada). But if it is not, the public can and should demand that the government enact new laws to address the off-loading of climate costs onto the public – much as the Canadian provinces did to pave the way for litigation against tobacco companies.

You can’t leave all this to the lawyers. The barriers to achieving accountability against the fossil fuel industry – whether through litigation, legislation or other means – are primarily political, not legal.

As a society we simply have trouble seeing the fossil fuel industry as responsible to a significant degree for climate change, even as we begin paying increased climate costs and they continue pocketing their profits. Until the public demands that the fossil fuel industry be accountable to communities, we’re unlikely to see governments enacting climate compensation laws or courts ruling in favour of climate-impacted communities.

Let’s take climate law into our own hands

Donald Trump has proven yet again that we cannot count on the governments of the world to avoid dangerous climate change. He probably believes that his withdrawal from Paris paves the way for the United States to continue benefiting financially from expanded fossil fuel pollution.

He’s wrong, of course. You can’t base an economic system on knowingly destroying our atmosphere and our communities. There are consequences, and we can make it so that those consequences can’t be ignored by him – or by other fossil fuel believers – any longer.

We do that by demonstrating that there is public demand for climate accountability and a possible path to achieving it in countries around the world:

Start talking about the climate harm that our communities are suffering here and now – whether flooding, wildfires or drought – and then ask who will be paying to “rebuild better” (in Prime Minister Trudeau’s words).

Publicly call out the fossil fuel industry for not paying its fair share of our climate costs. This is particularly important advice for governments, shareholders, investors and others who directly deal with climate costs and/or industry, but we all need to do it.

If you’re here in BC, join our Climate Law in our Hands Initiative.

* - Indeed, in many countries the courts may even claim authority over companies that are not actually present within their borders under certain circumstances, many of which are often present in climate claims (ie. damage to real property, damage within the jurisdiction, real and substantial connection between the case and the country). A notable exception to this rule is the United States, which insists that a defendant be present, at least to some degree, in the country.