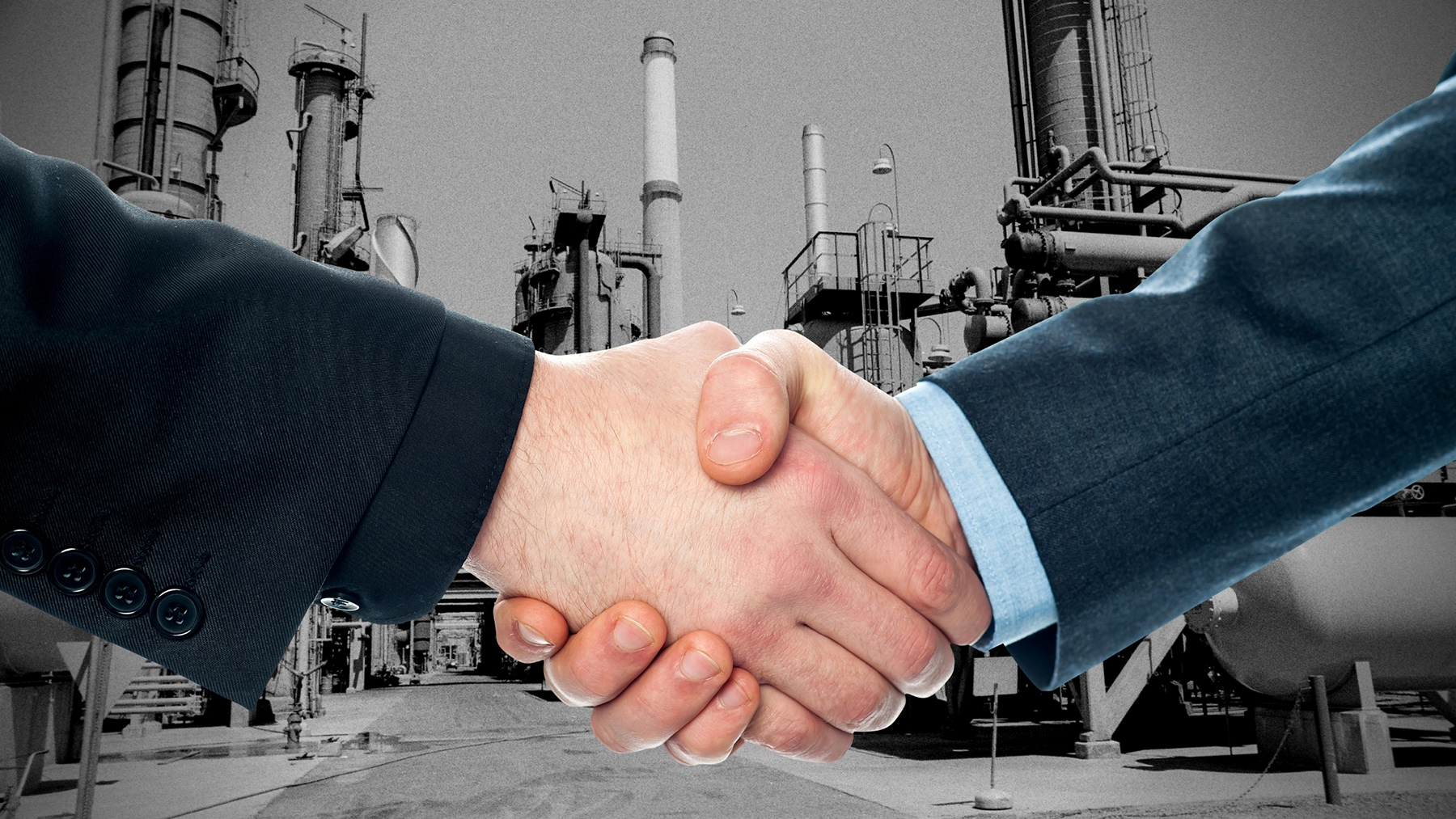 In recent years, oil and gas companies have tried desperately to “clean up” their images in relation to the environment by referencing policies like carbon taxes or the shift to natural gas as part of the effort to fight climate change. While industry actors have shifted away from publicly denying climate science, a recent investigation from Greenpeace UK’s journalism project, Unearthed, reveals that far from disappearing, these efforts are now characterized by lobbying relationships behind closed doors, with dire implications for democracy.

You may have heard about the recent insights into the lobbying clout that oil giant ExxonMobil has in the U.S., arising when Unearthed reporters posed as job recruiters met with, and recorded, U.S. Exxon lobbyists. The lobbyists boasted of strategies to undermine action on climate change, including targeting politicians who are up for re-election or who they see as influential, engaging with “shadow groups,” and opposing climate action in private lobbying despite public claims of support.

The video, released in late June, was obtained through a “sting” operation in which a reporter from Unearthed posed as a recruiter. Under those pretenses, the reporter was able to record two senior ExxonMobil employees talking about their approach to lobbying and to climate action:

Keith McCoy – a senior director in Exxon’s Washington DC government affairs team – told the undercover reporter that he is speaking to the office of influential Democratic senator Joe Manchin every week, with the aim of drastically reducing the scope of Biden’s climate plan so that “negative stuff”, such as rules limiting greenhouse gas emissions and taxes on oil companies, are removed. ...

A second Exxon lobbyist, Dan Easley – who left the company in January after working as its chief White House lobbyist throughout the Trump administration – laughed when asked by an undercover reporter if the company had achieved many policy wins under Trump, before outlining victories on fossil fuel permitting and the renegotiation of the NAFTA trade agreement.

In the United States, Exxon lobbyists have been busy “aggressively” fighting climate science despite public claims from the oil and gas giant of support for efforts to fight climate change. These public claims of support seem somewhat disingenuous, as the Exxon lobbyist admitted that they serve as talking points upon which they can rely with little worry of actual policy change.  Some have characterized this as a shift from “denialism to delayism,” but the dissonance between public messaging and private lobbying points to a worrying lack of accountability that could damage democracy.

“Nobody is going to propose a tax on all Americans and the cynical side of me says, yeah, we kind of know that but it gives us a talking point that we can say, well what is ExxonMobil for? Well, we’re for a carbon tax,” McCoy said.

What about ExxonMobil lobbying in Canada?

The Canadian Encyclopedia defines “lobbying” as “the process through which individuals and groups articulate their interests to federal, provincial or municipal governments to influence public policy or government decision-making.” But this broad definition ignores the inequities in resources, clout and access that some corporations bring to their lobbying. The Unearthed report raises questions about corporate access to Canadian politicians.

Spending obscene amounts of money fighting climate legislation and weekly conversations with public office holders isn’t uniquely American. In Canada, ExxonMobil’s two main subsidiaries, ExxonMobil Canada Ltd. and Imperial Oil, also engage in large-scale lobbying efforts. We’ve taken a look at the federally reported activity from their lobbyists, but these are only two in a large field of industry actors, who are lobbying provincial officials as well.

Canadian law requires the registration of both in-house (employees of a company that lobbies) and consultants (lobbyists who are hired specifically to lobby on an issue or issues). Registration provides for some tracking and transparency, but after a look into Imperial Oil and Exxon Canada’s lobbying efforts north of the border we still had a lot of questions.

In the past 12 months, Imperial Oil and ExxonMobil Canada collectively recorded 76 meetings with government officials (for Imperial, 60 from the in-house lobbyists and 4 from a consultant, and a further 12 from ExxonMobil Canada). That’s equivalent to almost one and a half meetings a week.

The government officials included senior staffers and politicians such as the Ministers of Environment and Climate Change (7 meetings) and Natural Resources (4 meetings), as well as many individual MPs and Senators. Seven meetings were with MPs from the Conservative Party of Canada, including the leader of the Official Opposition Erin O’Toole, and 4 meetings were with Liberal MPs. In the last year, there were no meetings with MPs from the NDP, Bloc, or Green parties.

The number of communications from industry is cause for concern not just because of the policies that they are peddling, but also because it takes up the valuable time of public officials who could otherwise be listening to the concerns of citizens and their constituents.

In addition to direct lobbying from subsidiaries, industry groups such as the Canadian Association of Petroleum Producers recorded 178 communications over the last year (more than three a week). According to news reports, CAPP formed a secretive committee with Minister of Natural Resources Seamus O’Regan and several high-ranking government officials in order to push their policy objectives, including weakening regulatory safeguards, securing government funding, and suspending lobbying reporting requirements.

While this industry group isn’t directly owned or controlled by ExxonMobil, ExxonMobil Canada and Imperial Oil are both members of CAPP. The use of such trade groups has been documented by Unearthed and by the National Observer to disguise the corporations’ involvement with policy objectives that could damage their public reputation. As McCoy told Unearthed:

The nature of these discussions is difficult to ascertain because the registry only includes reports on the broad categories of subject matter like “energy” or “environment”, with “climate” listed as separate. Interestingly, Imperial Oil only reported discussing “climate”  once since 2008, despite the monthly registrations indicating that Imperial has been lobbying on climate and legislation like the Greenhouse Gas Pollution Pricing Act.

With the recent passing of Bill C-12, the Canadian Net Zero Emissions Accountability Act, it is worth noting that there is no recorded mention of Imperial representatives discussing the then Bill with government representatives. The legislation has been discussed and debated since November 2020. For context, every time there is an update to a registrant’s lobbying profile (whether it be subject matter, government institution, subject matter detail, or lobbyist information) a new registration is posted. This would suggest that Exxon subsidiaries did not directly lobby on the Bill, although CAPP did meet with government officials about the Bill.

One can get a sense of the significance of Exxon’s lobbying in Canada by looking at a historic example: Canada’s involvement with the Kyoto Protocol, a key climate change treaty. The Unearthed article quotes the Exxon lobbyists talking about their role in ensuring that the United States ultimately did not ratify Kyoto. However, Canada did.

The Kyoto Protocol was a topic that Imperial Oil and ExxonMobil listed as a subject of lobbying in Canada up until 2012, when Canada withdrew from the agreement and repealed Canada’s legislation implementing it. While we cannot say with certainty that Prime Minister Stephen Harper’s government would not have withdrawn from the agreement without industry lobbying, the frank statements made by ExxonMobil staff raise that question.

Lobbying doesn’t just take time; significant financial costs are associated with this kind of activity. Precise figures for how much Imperial Oil spends on lobbying are unavailable but even with recent income fluctuations, the magnitude of reported engagement suggests Imperial has had a few dollars to spare in order to advance its policy objectives over the last year.

Environmental charities and non-profits often do not have that level of financial freedom. Picking and choosing effective ways to advocate for or against a certain issue has not always been an option for non-profits and many simply do not have the funding to spend $50,000 on a single gala dinner to get up close and personal with influential political candidates.

While West Coast Environmental Law Association does engage in some lobbying on issues that are important to the communities we serve, the resources we have to do so tend to be much more limited. We’ve upped our game to ensure that the public interest is represented – including actively engaging on key environmental legislation like Bill C-12, Canada’s new climate law – but it’s hard work making sure that the government hears a more balanced story than Exxon has been telling officials in the U.S.

Canada’s Lobbyists Registry requires lobbyists to disclose funds that they receive from different levels of Canadian governments. In doing this review, we were surprised to see huge sums of money paid by the Canada Revenue Agency (CRA) to Exxon ($30,000,000.00), Imperial ($156,000,000.00), and other fossil fuel companies such as Suncor ($358,215,489.00), and Husky ($86,003,199.98). It appears that this funding may be related to one or more COVID-related programs, but the CRA cannot confirm details due to confidentiality concerns. If correct, these are, of course, still subsidies, but subsidies in exceptional circumstances.

Nonetheless, this serves as an important reminder that government funding is a major reason that fossil fuel companies lobby our governments, and why taxpayers should care about the large numbers of meetings. Several companies, although not Exxon or Imperial, also listed subsidies from provincial government programs for technological innovation and/or clean-up of oil and gas wells. For example, Husky reported $15,900,548 for such programs from the governments of Saskatchewan, Alberta and BC, while Suncor reported $42,486,316 from the governments of Alberta, Newfoundland and BC.

What we were able to find can’t paint the full picture, because subsidies do not always show up as direct payments to fossil fuel companies. Tax breaks, favourable treatment, government construction of infrastructure to help a company, and many other government actions and expenditures can be subsidies, but would not show up in the Lobbyists’ Registry statements. Environmental Defence Canada has recently calculated that the federal government spent at least $18 billion in subsidies and support for the fossil fuel industry in 2020.

Commitments to climate targets are going to be hard to keep if major contributors keep getting massive public financial support. And lobbying is one way that fossil fuel companies can press governments to keep that funding in place.

These revelations about the extent of industry lobbying in Canada raise some important questions. With for-profit companies like ExxonMobil and Imperial Oil receiving millions in government funding, publicly playing the part of a co-operative player for climate change action while turning around and lobbying public officials with opposite policy objectives behind closed doors, many Canadians are rightly concerned about the level of influence that these companies hold.

One need only listen to the statements made by Exxon lobbyists McCoy and Easley to know that the company has been doing everything it can to undermine action on climate change:

And as we see more of the effects of climate change come to bear, we have to ask ourselves, who is the government of Canada listening to: Canadians or corporate lobbyists?

[Note: This post was updated on July 23 to add reference to reports of a committee formed with Canada's oil lobby during the pandemic.]