Celebrating 30 Years of Environmental Legal Aid in BC 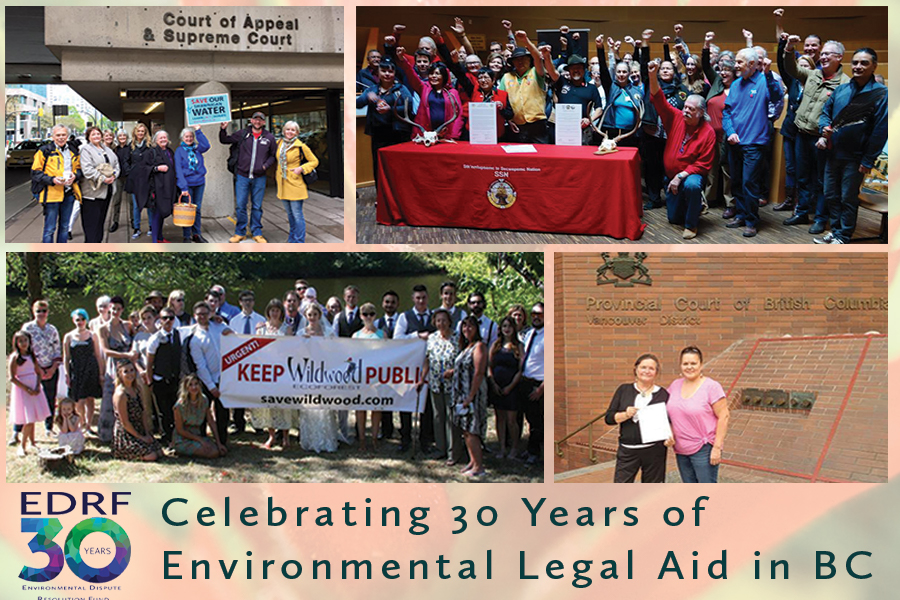 When concerned individuals, community groups and First Nations are seeking justice on behalf of the environment, they need someone to turn to. That’s where programs like West Coast Environmental Law’s Environmental Dispute Resolution Fund (EDRF) come in – ensuring that people in BC have access to affordable legal services to address environmental issues in the public interest.

The EDRF program, which is funded by The Law Foundation of British Columbia, is unique in British Columbia and one of the very few of its kind in Canada. This year, as the EDRF celebrates its 30th anniversary, we’re reflecting on our impact on environmental protection in BC and sharing some of our hopes for the next thirty years.

Since 1989, the EDRF has distributed more than $5 million in grants to over a thousand community groups, individuals, and Indigenous communities, building their capacity to engage with the law effectively on environmental issues. The EDRF has won many major environmental victories, and it has allowed important cases to go forward that would otherwise have been unrepresented.

To learn more about the impact of the EDRF, read our new report: "From the Ground Up"

Here is an important current example: In fall 2018, the federal Greenhouse Gas Pollution Pricing Act came into force, putting financial incentives in place to reduce carbon emissions. The governments of Saskatchewan and Ontario challenged the new legislation as unconstitutional. With support from the EDRF and lawyers willing to work at legal aid rates, Generation Squeeze stepped up to help defend it.

The BC-based advocacy organization formed a new Intergenerational Climate Coalition and intervened in the reference cases, arguing the importance of protecting children and future generations. In both Ontario and Saskatchewan, the courts held that the carbon pricing legislation was indeed constitutional – and now this important case is destined for the Supreme Court.

Says Generation Squeeze founder Dr. Paul Kershaw, “We’re now poised to bring these arguments to the Supreme Court of Canada, and couldn’t have done any of our legal work without the Environmental Dispute Resolution Fund. We are indebted to WCEL, and all who contribute to the EDRF, for making possible this cutting-edge legal intervention to help address the climate crisis.”

Looking to the future, we want to grow the capacity of the EDRF so that it continues to support a sustainable BC over the next thirty years and beyond. While we have a long history of granting to First Nations, we want to grow our capacity to provide legal support for cases that use Indigenous as well as Crown laws to protect the environment. This holistic approach would complement our broader work with Indigenous partners toward revitalizing Indigenous legal orders, and contribute to establishing the conditions needed to engender respectful co-governance by Indigenous and Crown governments on environmental management.

We are very excited to see these cases already coming forward. In fall 2018, the EDRF began supporting the Heiltsuk Nation in holding government and industry accountable for a fuel spill in 2016 from the sinking of the Nathan E. Stewart. The spill of 110,000 litres of diesel fuel devastated an important cultural site and traditional food resources, and profoundly impacted the community.

The Heiltsuk filed a Notice of Civil Claim in the BC Supreme Court suing Kirby Corporation, BC, and Canada. The lawsuit seeks damages for losses incurred by the Heiltsuk, while raising new legal questions about applying Aboriginal title to the seabed and foreshore, and how to quantify cultural losses. The case also raises questions about the national and provincial oil spill response framework, and Canada and BC’s constitutional duties to Indigenous communities affected by spills.

Going forward, we are also actively working to broaden our outreach and improve access to environmental justice for those who have need for our services but may not know about us, with an emphasis on “amplifying the voices of poor, racialized and Indigenous communities in environmental and natural resource policy-making venues – places that have typically produced decisions resulting in those communities bearing more than their ‘fair share’ of environmental harms.”